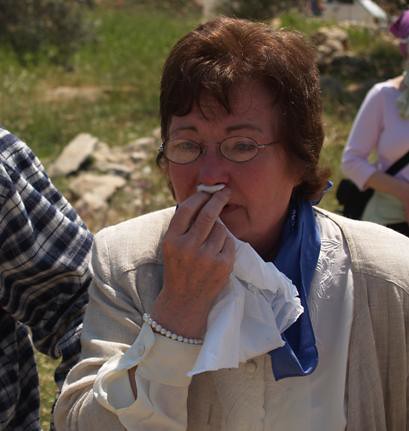 If you listened to Democracy Now on Monday, you already know the following:

Irish Nobel Peace Laureate Mairead Maguire was among a number of people shot Friday by Israeli troops at a nonviolent protest of the “apartheid wall” in the Palestinian village of Bil’in, near Ramallah.

But if you didn’t listen to Democracy Now Monday, you probably didn’t know that.

Maguire was shot with what the Israeli military – and some press reports – misleading refer to as a “rubber bullet” – that is, a rubber-coated steel bullet.
Why isn’t this “news” in the United States? There’s nothing on the web sites of the New York Times, the Washington Post, or the Los Angeles Times, not even a wire story.

Those who blame the Palestinian people for their fate, attributing it to Palestinian violence, and faulting the Palestinians for not emulating Gandhi, King, or Mandela (whose role in the “armed struggle” against apartheid in South Africa is always conveniently elided for the purpose of this comparison) should periodically ask themselves, when Palestinians do engage in nonviolent protest, and are subjected to brutal repression as a result, how come the mainstream U.S. media don’t pay any attention?

Wouldn’t this be a precondition for a successful nonviolent protest strategy? That people find out about it? Imagine if U.S. news organizations had not reported on lunch counter sit-ins in the South, Freedom Rides, or the Montgomery bus boycott – and the repression that resulted. What if no-one reported on the deaths of Evers, Goodman, Schwerner, Chaney. Would these protests have been as effective?

And if a Nobel peace laureate is shot at a non-violent protest using weapons paid for by the U.S. taxpayer, isn’t that news?

A new poll from World Public Opinion.org finds that nine in ten Egyptians thinks that the U.S. is at war with Islam, and wants the U.S. to “remove its bases and military forces from all Islamic countries.” Eight in ten Egyptians support attacks on U.S. troops in the region to bring this about.

U.S. policy towards the Palestinians is surely not the whole story, but it is surely an important part of the story. If the U.S. cannot, in the short term, compel Israel to accept a political settlement with the Palestinians along the lines of the international consensus – withdrawal to the 1967 borders – can’t we at least get them to stop shooting unarmed demonstrators? Or, if even that is too much to ask, how about no shooting Nobel peace laureates?

Wednesday night Bill Moyers will examine on PBS how the U.S media failed us in the run-up to the Iraq war. Perhaps Mr. Moyers could look into how the U.S. media is failing us on our policy towards the Palestinians.