Avnery: Blood on Our Hands

April 17th is recognized annually by Palestinians as Prisoner’s Day

At this moment, negotiations on a prisoner exchange are in full swing.

The term “negotiations” is really inappropriate. “Haggling” seems more fitting. One could also use an uglier expression: “trafficking in human beings”.

The planned deal concerns living people. They are being treated like goods, for which the officials of the two sides are bargaining, as if they were a piece of land or a load of fruit.

In their own eyes, and in the eyes of their spouses, parents and children, they are not goods. They are life itself.

Immediately after the signing of the Oslo agreement in 1993, “Gush Shalom” publicly called on the Prime Minister, Yitzhak Rabin, to free all the Palestinian prisoners.

The logic was simple: they are in reality prisoners-of-war. They did what they did in the service of their people, exactly like our own soldiers. The people who sent them were the chiefs of the Palestinian Liberation Organization (PLO) with whom we have just signed a far-reaching agreement. Is there any sense in signing an agreement with the commanders, while their subordinates continue to languish in our jails?

When one makes peace, prisoners-of-war are expected to be released. In our case, this would not only be a sign of humanity, but also of wisdom. These prisoners come from all the towns and villages. Sending them home would release an outburst of joy all over the occupied Palestinian territories. There is hardly a Palestinian family that does not have a relative in prison.

If the agreement is not to remain just a piece of paper, we said, but be imbued with content and spirit – there is no wiser act than this.

Unfortunately, Rabin did not listen to us. He had many positive traits, but he was a rather closed person, devoid of imagination. He was himself a prisoner of narrow “security” concepts. For him, the prisoners were goods to be traded for something. True, before the founding of Israel he himself had been held in detention by the British for some time, but, like many others, he was incapable of applying the lessons of his own experience to the Palestinians.

We considered this a fateful matter as far as the peace efforts were concerned. Together with the unforgettable Faisal Husseini, the adored leader of the Palestinian population of East Jerusalem, we organized a demonstration opposite the Jneid prison in Nablus. It was the largest joint Israeli-Palestinian demonstration ever. More than ten thousand people took part.

In vain. The prisoners were not released.

Fourteen years later, nothing has changed. Prisoners have been released after completing their sentence, others have taken their place. Every night, Israeli soldiers capture a dozen or so new “wanted” Palestinians.

At any one time, there are some 10,000 Palestinian prisoners, male and female, from minors to old people.

All our governments have treated them as goods. And goods are not given away for nothing. Goods have a price. Many times it was proposed to release some prisoners as a “gesture” to Mahmoud Abbas, in order to strengthen him vis-à-vis Hamas. All these suggestions were rejected by Ariel Sharon and Ehud Olmert.

Now, the security services oppose the prisoner exchange deal for the release of the soldier Gilad Shalit. And not because the price – 1400 in exchange for 1 – is exorbitant. On the contrary, for many Israelis it seems quite natural that one Israeli soldier is worth 1400 “terrorists”. But the security services raise much weightier arguments: if prisoners are released for a “kidnapped” soldier, it will encourage the “terrorists” to capture more soldiers.

At least some of the released prisoners will return to their organizations and activities, and that will result in more bloodshed. Israeli soldiers will be obliged to risk their lives in order to arrest them again.

And there is something else lurking in the background: some of the families of Israelis killed in attacks, who are organized in a very vociferous lobby connected with the extreme right, will raise hell. How could this pitiful government, devoid of any public standing, withstand such pressure?

For each of these arguments, there is a counter-argument.

Not releasing the prisoners leaves the “terrorists” with a permanent motivation to “kidnap” soldiers. After all, nothing else seems to convince us to release prisoners. In these circumstances, such actions will always enjoy huge popularity with the Palestinian public, which includes many thousands of families that are waiting for the return of their loved ones.

From a military point of view, there is another strong argument: “Soldiers are not left in the field”. This is held as a sacred maxim, a mainstay of army morale. Every soldier must know that if he or she is captured, the Israeli army will do everything, but everything, to get him free. If this belief is undermined, will soldiers be as ready to take risks in battle?

Furthermore, experience shows that a high proportion of released Palestinian prisoners do not return to the cycle of violence. After years in detention, all they want is to live in peace and devote their time to their children. They exercise a moderating influence on their surroundings.

And as for the thirst for revenge of the families of “terror victims” – woe to a government that gives in to such emotions, which, of course, exist on both sides.

In Judaism, there is a commandment called “ransom of prisoners”. It arose from the reality of a persecuted community dispersed across the world. Every Jew is obliged to make any sacrifice and pay any price for the release of another Jew from prison. If Turkish pirates captured a Jew from England, the Jews of Istanbul paid the ransom for his release. In today’s Israel, this obligation still holds.

Public meetings and demonstrations are now being held for the release of Gilad Shalit. The organizers do not say openly that the aim is to push the government to accept the exchange deal. But, since there is no other way to get him back alive, that is the message in practice.

One cannot envy the members of the government who find themselves in this situation. Caught between two bad options, the natural tendency of a politician like Olmert is not to decide at all and postpone everything. But this is a third bad option, and one which carries a heavy political price.

The strongest emotional argument voiced by the opponents of the deal is that the Palestinians are demanding the release of prisoners with “blood on their hands”. In our society, the words “Jewish blood” – two words beloved by the Right – are enough to silence even many on the Left.

But that is a stupid argument. It is also mendacious.

In the terminology of the Security Service, this definition applies not only to a person who himself has taken part in an attack in which Israelis were killed, but also to anyone who thought about the action, gave the order, organized it and helped to carry it out – prepared the weapons, conveyed the attacker to the scene, etc.

According to this definition, every soldier and officer of the Israeli army has “blood on his hands”, along with many politicians.

Somebody who has killed or wounded Israelis – is he different from us, the Israeli soldiers past and present? When I was a soldier in the 1948 war, in which tens of thousands of civilians, fighters and soldiers on both sided perished, I was a machine-gunner in the Samson’s Foxes commando unit. I fired thousands of bullets, if not tens of thousands. It was mostly at night, and I could not see whether I hit anybody, and if so – who. Do I have blood on my hands?

The official argument is that the prisoners are not soldiers, and therefore they are not prisoners-of-war, but common criminals, murderers and their accomplices.

That is not an original argument. All colonial regimes in history have said the same. No foreign ruler, fighting an uprising of the oppressed people, has ever recognized his enemy as legitimate fighters. The French did not recognize the Algerian freedom fighters, the Americans do not recognize the Iraqi and Afghan freedom fighters (they are all terrorists, who can be tortured and held in abominable detention centers), the South African apartheid regime treated Nelson Mandela and his comrades as criminals, as the British did to Mahatma Gandhi and the fighters of the Hebrew underground in Palestine. In Ireland, they hanged the members of the Irish underground, who left behind moving songs (“Shoot me like an Irish soldier / Do not hang me like a dog; / For I fought for Ireland’s freedom / On that dark September morn…”)

The fiction that freedom-fighters are common criminals is necessary for the legitimation of a colonial regime, and makes it easier for a soldier to shoot people. It is, of course, twisted. A common criminal acts in his own interest. A freedom fighter or “terrorist”, like most soldiers, believes that he is serving his people or cause.

One paradox of the situation is that the Israeli government is negotiating with people who themselves have served time in Israeli prisons. When our leaders speak about the need to strengthen the “moderate” Palestinian elements – they mainly mean these.

That is a feature of the Palestinian situation, which I doubt the existence of in other occupied countries. People who have spent five, ten and even twenty years in Israeli prisons, and who have every reason in the world to hate our guts, are quite open to contact with Israelis.

Since I know some of them, and some of them have become close friends, I have wondered many times about this.

At international conferences I have met Irish activists. After several pints of Guinness they have told me that they know no greater joy in life than killing Englishmen. I was reminded of the song of our poet Nathan Alterman, who prayed to God “Give me hatred grey like a sack” (for the Nazis). After hundreds of years of oppression, that’s how they felt.

Of course, my Palestinian friends hate the Israeli occupation. But they do not hate all Israelis, just for being Israelis. In prison, most of them have learned good Hebrew and listened to Israeli radio, read Israeli newspapers and watched Israeli TV. They know that there are all kinds of Israelis, just as there are all kinds of Palestinians. Israeli democracy, which allows members of the Knesset to vilify their prime minister, has made a deep impression on them. When the Israeli government showed a readiness to negotiate with Palestinians, the best partners were to be found among these ex-prisoners.

That is also true for the prisoners that are to be released now. If Marwan Barghouti is released, he will be a natural partner in any peace effort.

I shall be very happy when both he and Gilad Shalit are free.

Uri Avnery will be leading a workshop at the Bil’in Second Annual International Conference. Click HERE for details and registration. 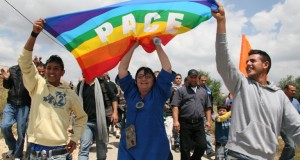