Not a happy Mother’s Day

Not a happy Mother’s Day
by Martinez

“No, this is not a happy Mother’s Day!” said Fatima Brijea as she pointed to the framed photograph behind me. It was her son. He was assassinated by the Israeli army. I sat in her living room sipping tea. I noticed the strength of Fatima’s hands as she poured my sweet tea. She is a farmer and has been all her life. Her greenhouses are lush with vegetables and the view from her yard is breathtaking. 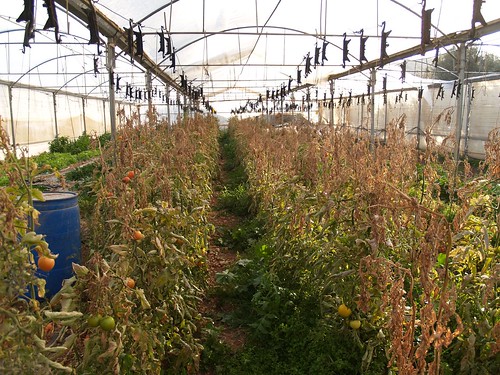 One is rendered speechless, however, when you stroll a few kilometers away to find US sponsored Caterpillar bulldozers ripping apart Fatima’s land and others like her. Israel’s Apartheid wall, like all over the West Bank, is snaking through the land and separating farmers from their farmland, school kids from their schools, patients from their hospitals. And here, in Um Salamuna, things are starting to resemble places like Qalqilya and Bethlehem, where an 8-meter high wall, the most atrocious eye sore in the most beautiful of lands, is thieving the most precious of things from the Palestinians– their land. 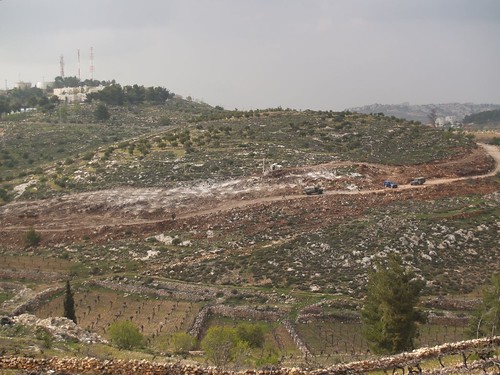 So yesterday was Mother’s Day. It was also the UN International Day for the Elimination of Discrimination. It is observed annually on 21 March. On that day, in 1960, police opened fire and killed 69 people at a peaceful demonstration in Sharpeville, South Africa, against the apartheid “pass laws”. Proclaiming the Day in 1966, the General Assembly called on the international community to redouble its efforts to eliminate all forms of racial discrimination. 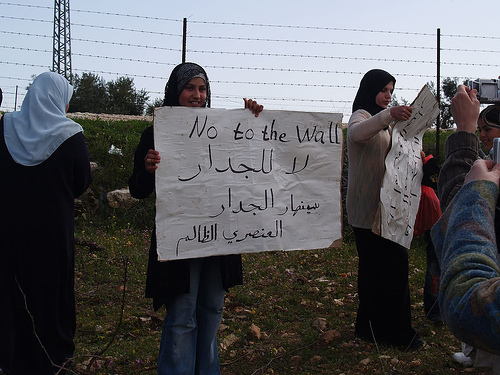 Fatima is the leader of the Um Salamuna Women’s Organization. Other women from the Organization marched in solidarity with other Palestinians, Israeli, and international human rights groups. The demonstrators marched towards the construction site. Agricultural memories of ancient times were disintegrating into nothingness as the bulldozers tore away at Mother Earth, scattering her ashes in all directions, carelessly, angrily.

The Mothers and the Daughter and the Sisters of the land stood there on Mother’s Day. The bulldozer halted. The Israeli soldiers, with their helmets and guns, hovered in the background. I searched their eyes for an answer. “Why do you let them do this?”

Fatima spoke to the crowd:

“Today represents our struggle. Now our land is taken by Occupation. The land of our children is taken. The land of our grandfathers– have been related for thousands of years. We want the world to see the Palestinians’ suffering. We are calling on the world to stand beside us. Stop the Occupation! Stop the Occupation!… It is not possible to transfer us from out land. We are staying! And the Israelis are staying. So let us be good neighbors for each other. Stop the Wall! Stop the violence!”

Fatima thanked the participants, the media, and all the internationals for joining in on the struggle.

Andareet, a woman from the Organization, spoke next. She thanked everyone present for being there with them and addressed:

“Even when this wall is built. Even if they build 50 walls, we are staying on our land! This wall was built by force– but we will resist with Faith. And, insha’allah, we will succeed!”

“Why today, on Mother’s Day, are Mothers all over the Arab world smelling nice air– but here Palestinian Mothers are smelling Israel’s gas? Mothers all over the world are in green land and Spring, so why are Palestinian Mothers participating by seeing their children arrested and their land taken?… Because of the effects of the Wall, all people across Palestine are going to suffer– socially, economically, and agriculturally… Here in Um Salamuna, it reflects that Israel does not want peace. They make the conflict deeper. They don’t want peace for their people. They’re preparing for the next revolution by taking our land!”

Beca, and international volunteer from the Palestine Solidarity Project, spoke next. She said:

“Remember on Women’s Day, Mothers, Sisters, and Daughters are losing their land. They are losing their sons, husbands, and daughters to the Occupation.We are honored to be here with you, to work in solidarity to stop this Wall.”

Not a single rock was thrown by the Palestinians at their colonizers, their Occupiers. The women decided to call off any further marching to the Wall. And as the crowd made their way up the farmland, the bulldozers started back to work at killing the Earth, making way for the continuation of over 500 miles of concrete, equipped with motion sensors and sniper towers- a huge wall, built by Israel out of racial discrimination, an Apartheid state that holds one group of people over another.

No. It was not a happy Mother’s Day.