Harrassment continues at checkpoint in Tel Rumeida
by ISM Hebron 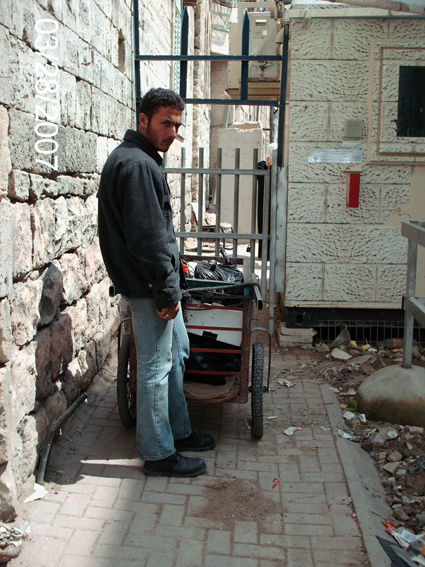 At 12.15 a Palestinian man approached the checkpoint carrying what looked like a large old-fashioned radio on his shoulder. Again, the soldiers refused to let the man pass through the gate so the Palestinian was forced to awkwardly carry the radio through the metal detectors. The metal detectors went off as the man walked through but the soldiers did not check the radio at all. 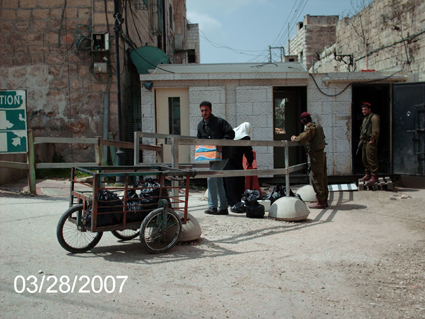 Adolescent settlers stoned the Saaed family home again today. They broke windows and an external water pipe and terrorised the women and 8 children that live there (the men were away at work). Family members said they telephoned the police but got no response. They also said that they had called to the soldiers on the top of the nearby military post who did not react.

The Saaed home is located on a pathway that links the Tel Rumeida and Beit Romano settlements. This makes the home a convenient and regular target for settlers using that route, especially on Saturdays, the Jewish Sabbath.

Three HRWs arrived at the house shortly after the incident. They were interviewing family members when they noticed settler children looking over at the Palestinian house. Three settler boys, aged approximately 10, then began to throw large stones at the HRWs. When asked by one of the HRWs to stop, one of the children shouted “fuck you” and carried on throwing stones. The HRWs repeatedly asked a soldier stationed at a nearby military post to fulfill his legally required duty and stop the children throwing stones. The soldier told the human rights workers to vacate the area, which only seemed to embolden the rock-throwers.

As the HRWs were leaving the scene, the settlers trespassed on the garden of a local Palestinian. When the HRWs asked why they were standing there, as it was not their property, the adult settler replied that this garden was Jewish property.

Approximately 6 soldiers arrived and told the HRWs to wait for the police. When the HRWs asked the police to remove the settlers from the Palestinian garden, a solider told the them that the garden was a Jewish property. A policeman arrived and spoke to the settlers and soliders but would not talk to the HRWs even though one of the soldiers offered to translate. Finally, two of the ISMers were told by the soldiers to go with the policeman to make a statement.

At the police station, the HRWs learnt that the adult settler had accused one of them of assaulting him. A review of the video tape shot by one HRW at the scene showed that no assault had taken place. No one was charged and no one arrested.

The Saaed family has been prohibited from owning or using a camera to record the rock-throwing incidents, based on a flimsy excuse that they may photograph the nearby military post.