It’s been a week since I returned home here to Palestine.

And it has been four years since a twenty-three year old American peace activist, named Rachel Corrie, was killed by an Israeli Occupation Forces bulldozer in the Gaza Strip. 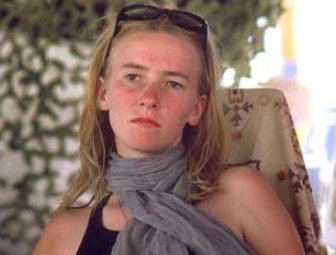 I never met Rachel. But I can feel what drove her to this place. The people and the land and the history melds into the tastiest brew. But it goes stale as you witness the harassment around every corner. A concrete wall separates a Palestinian town from Palestinian town. A 22 year old Israeli soldier screams at a 60 year old farmer trying to access his farmland. How can this be? Most of my folks back home would not even believe it. It’s hard to keep the blood from boiling. The Palestinians are in a constant state of being pushed from their Land.

The balfour declaration of 1917. Al Nakba (the Catastrophe)of 1948 when Israel was created on top of Palestinian land. Then 1967 brought the illegal Israeli Occupation of what remained of historic Palestine–the West bank and Gaza. Imagine 40…60…90 years of this! All these years of deportation from your home, fear, house demolitions, harassment, destruction of farmland, collective punishment…and the list goes on and on…

And Rachel saw this four years ago in Gaza. Writing through e-mail she said,

“I have been in Palestine for two weeks and one hour now, and I still have very few words to describe what I see. It is most difficult for me to think about what’s going on here when I sit down to write back to the United States. Something about the virtual portal into luxury.”

“I have bad nightmares about tanks and bulldozers outside our house and you and me inside. Sometimes the adrenaline acts as an anesthetic for weeks and then in the evening or at night it just hits me again – a little bit of the reality of the situation. I am really scared for the people here.”

And then Israel came to bulldoze a house in Rafah, the town where Rachel was staying. Unfortunatley, the house of the civilian Palestinian stood in the zone of Israel’s Wall. Israel claimed that under the house, Palestinian militants were using tunnels to smuggle weapons from Egypt. No tunnels have been found.

So, Rachel, with her bullhorn and bright orange jacket stood affront the house. And chills go through me every time I think about what was going through her mind at that time.

“You’re gonna stop… This bulldozer is going to stop!”

But the bulldozer didn’t stop. Instead, the bulldozer, manufactured and distributed by the American corporation “Caterpillar,” moved forward. The Israeli driver did not stop for her screams. He did not stop for her bright orange jacket or when the other human rights volunteers rushed forward, flailing their arms. No, the driver buried her underneath tons of steel and earth, and then wheeled the monstrous Caterpillar back over her, crushing her for a second time. 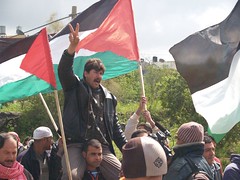 Yesterday, in the village of Bil’in in the West Bank, there was a small vigil for her in commemoration of her life and resistance. Bil’in has a wall running thourgh it, separating Palestinians from their farmland. 60% of the farmland has been annexed into Israel due to this Wall. For over two years, Palestinians, Israelis, and international non-violent activists have demonstrated in solidarity against this Wall.

Banners in honor of Rachel were seen scattered throughout the demonstration. 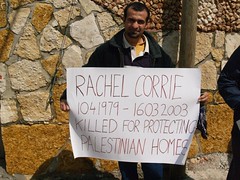 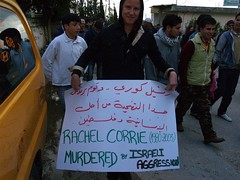 We marched to the wall where the Israeli Occupation Forces were waiting for us, as they usually are. The tactics they use to our non-violent demonstrations vary. Some walked past the razor wire to get closer to the farmland on the other side of the Wall. Others stayed back.

The IOF responded by beating people with their batons and pushing demonstrators to the ground or dragging them along it. 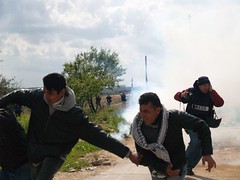 After the fog from the tear gas, sound bombs and rubber bullets cleared, it was realized that four people had been arrested, including Palestinian and Israeli demonstrators, and 7 were injured, including a Palestinian journalist. 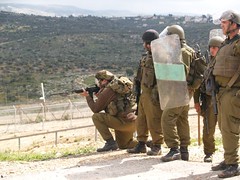 Another peaceful demonstration achieving a violent response from what Israel calls their Israeli “Defense” Forces. But those who are living under Occupation and those who come to witness see their true colors.

Rachel saw this in Rafah four years ago. And those of us here now, continuing non-violent resistance to the longest-standing Occupation of our time, see these crimes. And many wonder when the rest of the world will realize that their luxury comes at a heavy price to others across the world.

There has been no justice for Rachel to date. And the crimes against the Palestinians continue to multiply as the international community turns its back.

After the demonstration I headed down to Hebron. My eyes were stained with tear gas residue and the smell seeped from my clothes. But I wanted to end this day on a happier note, for Rachel, and for the kids in the Tel Rumeida neighborhood of Hebron who are living under Israeli military control, and whose neighbors happen to be the most right wing, extremist Israeli colonialists in all of the West Bank.

So I met up with Katie to have our first TRCDP Reunion. 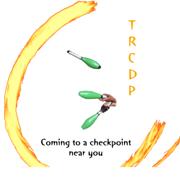 The Tel Rumeida Circus for Detained Palestinians is a circus group that Katie and I co-founded last summer in response to the abuse and harassment placed upon the Palestinians in Tel Rumeida.

The kids were so excited to see us back there to do our weekly Friday fire performances. Unfortunately, Palestine is squeezing out the last of its snow and rain and the show wsa postponed due to weather. Kinda’ hard to do fire performance in the rain.

But we will be back, and invite all of you to come and see us, coming to a checkpoint near you!

But for now, time for us to get to work. To continue the work of non-violent resistance, be it through writing, photographing, protesting, videotaping, circus performing, interviewing…

I wrote this poem for Rachel Corrie and for Palestine,
may we soon celebrate their justice…

Echoing through my dreams I hear the voices of the peaceful masses
As the Tanks shoot tear gasses
and rubber bullets.

And echoing through the televison
I hear the same old lies
As our non-elected president stares coolly at the lens of this tele-prompter.

The strings grew tighter between Bush and Sharon
But Bush only condoned the evils of that Bastard,
While money,
Faster and Faster
and faster
Was shipped to the Rascist State
as hungry people right outside on our streets
Met their fate
with no food…No healthcare…No money….

Cause echoing through my mouth I say the same old words and I wonder…
Whats that word?
Repition…Repition…
Repetition…

Well,… All for one
And one for all…
I for one can’t stand it!

‘Cause echoing through each and every cell in my body
I feel the desparation caused by Occupation.
Tax dollars manifesting themselves into Caterpillar bulldozers,
D-9 Model,
Specially designed in the United States to
Kill 23 Year Old PEACE Activists
and to Rip through Palestinian Homes,
While a Mother groans,
A Brother phones to tell of his 10-year old sister shot in the head by an Israeli soldier…

Tax dollars transcending themselves into Apache helicopters,
Dropping tons of missiles onto the crowded streets of Gaza.

“Collatoral Damage,” they call it.
I call it “A Shame!”
I call it, “Punishable under International Law
and Conventions of Geneva!”
While a Father grieves, a’
D-9 leaves ANOTHER field of Olive Trees Uprooted!

But violence is rooted in these actions.
Can’t have a fraction of one without the other.
Can’t reach an understanding
When you’re standing on the Landing Zone of and F-16 Bomber,
Branded with the words:
“Made in U- S- A-”

Ain’t no other way to end this viscous cycle…
Ain;t no other day ‘cept for the one in which we are right now…
See, fighting ain’t our pride,
But how can’t we when our kids are dying?
How can’t we when the sounds of all this Crying
Seep into each coming morning?

How can’t we when storming through the streets of:
Nablus
Jenin
Hebron
Qalqilya
Tulkarem
Come tons of tanks and bloodshed?

Fighting ain’t our pride
But being on this Ride, down the road of Genocide,
Is not going to cut it!

It’s not going to cut it the way we cut down these fences!
‘Cause let’s face it…

Echoing from the distance, I hear from out persistence:
Freedom.
Justice.
Resistance can only bring about this.

Echoing from my worldwide audience I hear a silent revolution…
But this silence is tragic…
Think of the magic of noise pollution…
Raise your voices and
SCREAM!