The settlers have worked very quickly and through the nights, despite the still outstanding High Court decision on the legality of their occupation of the Palestinian house, to install electricity, water and waste pipes. They have also now fitted spotlights to the roof of the building.

The HRWs observing at the house were informed by a Palestinian family living directly opposite the occupied house that they are now under curfew from 7pm and cannot leave their house after this time, as the only way out of their home is past the settlers and the occupied house.

There is still a heavy army and police presence at the house. HRWs observed border police urinating against the outside of the Palestinian cemetery wall on two separate occasions, despite there being two outhouses just metres away from where they urinated.

At approximately 15.00 two HRWs were walking through the Old City and came upon three soldiers holding three Palestinian men against a wall and checking their IDs quite aggressively, pointing their guns at the three Palestinians and at others attempting to pass. The soliders were also preventing a Palestinian from passing in his small tractor. When the HRWs stopped to watch what was happening, one of the soldiers approached and told them they weren’t allowed to stand there. The HRWs asked why and if it was a closed military zone, to which the soldier answered that it was. When the HRWs asked to see the paperwork for this, the soldier said that he didn’t have it and walked away. Soon afterwards, all three Palestinian men were allowed to go.

At appoximately 19.15, two HRWs were returning through the Old City when they noticed two men, a father and his adult son, being held by about six soldiers. Two CTP members were already present and the two men were released almost immediately. A kindergarten teacher and friend of the family then asked the HRWs and CPT members to come into the family house and see the mess left behind by the soliders, who had previously been inside the house. The kindgergarten teacher translated the family’s story for CPT and the HRWs: one of the father’s nephews, who is five years old, had been visiting the family and upon leaving the house noticed soldiers in the street. He called up to his young female cousin to tell her this; the father heard him calling and opened the window. Once the soldiers saw this and heard the child saying that there were soldiers in the street, they told the father to take all his family and come out onto the street. When the father asked why, the soldiers said that because the child had been telling the family that soldiers were in the street, they must be hiding something in their house. The soliders insisted that all the family, including women and children, come down into the street, but the father refused to allow the women and children to go, so just himself and his adult son went. Three soldiers then detained the father and son in the street, while three others went into the house, where the mother and her youngest children were, and searched their house. 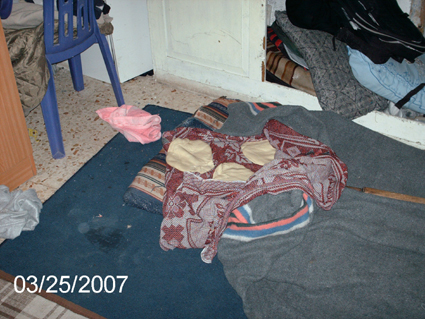 The mother had been about to bake bread and the soldiers stepped on the bread-making equipment, and rooted through their supply of blankets and their cupboards, making a mess, before leaving and releasing the father and son, who had been detained for approximately 30 minutes.

At 11am Peace Now (Gush Shalom) staged a protest demonstration against the occupation by settlers of Bayez Rajabe’s house near the Ibrahimi mosque in Hebron. 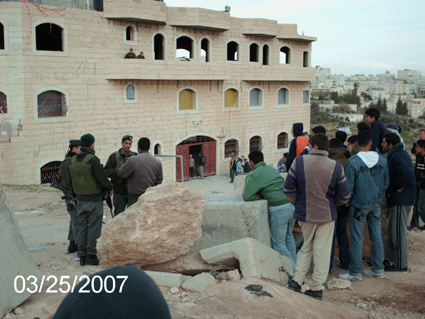 At 16.55 Jamil Abu Hekel, a Palestinian boy aged approximately 10, who lives in the house opposite the Tel Rumeida settlement, attempted to walk up to his house, as he does every day. A HRW accompagnied him. When they had nearly reached the soldiers’ post just below the settlement, the two Israeli soliders posted at the crossing called them back and asked Jamil his name and where he lives. Jamil told them, spelt his name and once the soldiers had checked this information on their radio, Jamil and the HRW were allowed to continue. Just past the soldiers’ post below Tel Rumeida settlement, the two were called back to the soldiers’ post there, and were again questioned as to who they were and why there were walking up the hill. One of the soldiers also asked Jamil at one point if he was a Muslim and asked who the HRW was. Jamil said that she was a friend and walking with him to his house. After a couple of minutes, Jamil was allowed to continue but the HRW was not allowed to pass and the soldier even told her that she was not allowed to stand with him to watch to see that Jamil got home safely, with no harrassment from the settlers.

Jamil said that these difficulties in being allowed home happened every day.