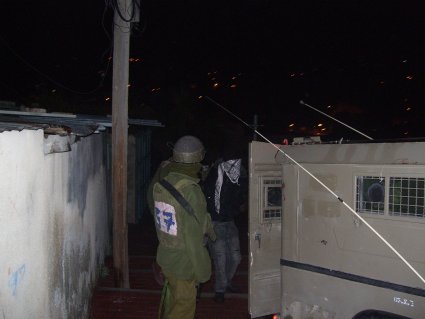 On February 2nd human rights workers (HRWs) received a call from neighbours at 9pm to say that two boys had been arrested and were being mistreated by soldiers in Tel Rumeida. The HRWs went immediately to the checkpoint at the top of Tel Rumeida St. where they saw two young teenage boys standing facing the wall on opposite sides of the road, blindfolded and with their hands cuffed behind their backs.

After about 5 minutes the soldiers ordered one boy to the other side of the street so they stood shoulder to shoulder. At around 9.30pm a military jeep arrived and drove the boys towards the Jewish cemetery and Tel Rumeida settlement.

The soldiers at the check point told us that the boys had been arrested for ‘throwing stones in the street’, but they didn’t tell us where the stone throwing happened and there are no witnesses to confirm it. The boys were released two hours later without charge.

This is just the latest example of the IOF trying to instill fear into the local Palestinian population and imposing an effective curfew in the evening. The message is clear: if we see you on the street in the eveining you can expect to be arrested.