Federico the “photographer”, chatting to a soldier

At around 2 pm human rights workers (HRWs) witnessed a young Palestinian man, Jihad Salfi Arab, beingd arrested by soldiers near checkpoint 56 in Tel Rumeida. He was violently pushed through the checkpoint where soldiers handcuffed and blindfolded him. 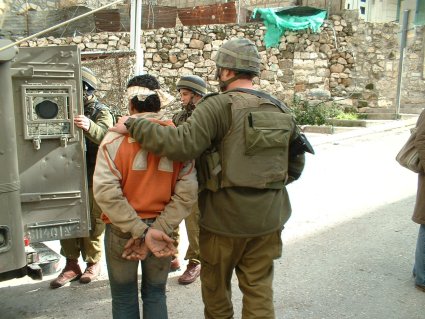 The IOF soldiers carried copies of pictures taken from the clashes last week in the Bab al-Zawiya area. They said he was visible in one the pictures, but wouldn’t show this to the HRWs. The Palestinian young man was then taken to the police station. 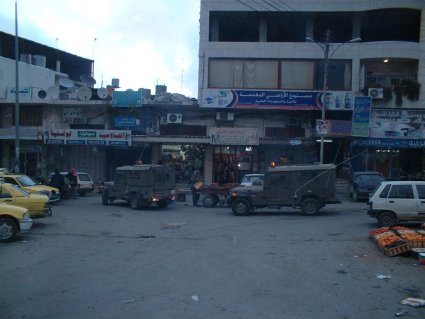 Throughout the afternoon IOF soldiers invaded the Bab al-Zawiya neighbourhood in Palestinian controlled H1. At around 2:30 pm 30 soldiers went through checkpoint 56. Six soldiers occupied the roof of a high building overlooking the busy market area and pointed their guns at the crowds below. Another group of six soldiers walked in the direction of the Old City. Four other soldiers entered a woman’s clothes shop and a pharmacy on al-Adel street and investigated the area. HRWs who were present assumed that they were looking for Palestinians who had been throwing stones during last week’s clashes.

The HRWs witnessed how for the past two days, soldiers at checkpoint 56 had been comparing young Palestinians with pictures taken from the clashes. These pictures were given to them by an Argentinian “photographer” who had become a good friend of the soldiers since the beginning of the clashes, last week on Wednesday. Federico the “photographer” has become a helpful partner for the IOF in recognising and arresting wanted Palestinians. Soldiers asked him to take pictures which he generously did.

Federico the “photographer”, hanging out with soldiers at the Tel Rumeida checkpoint

For the second day in a row, settlers invaded a temporarily vacant Palestinian house in the Tel Rumeida neighbourhood, on top of a hill overlooking the olive grove. About 15 settlers, women and children, arrived at 4 pm and stayed for one hour, until the arrival of the police, who were called by the nextdoor Palestinian neighbours. When HRWs heard about the occupation, they went to the house, but both the police and the IOF soldiers did not allow them to stay, claimimg it’s an “army zone”. The HRWs saw that Hebrew letters had been painted on the walls. The Palestinian neighbour said that yesterday the settlers managed to stay for a few hours in the house, but were finally sent away by the police. Yesterday the area surrounding the house had been sealed off by the IOF, making it impossible for HRWs to get near to the house.