Around 80 people, Israelis, Palestinians and internationals, gathered by the Abu Aisha family house where a local peace activist explained the difficulties faced by Palestinians in Tel Rumeida and thanked the Israeli activists for coming as a sign of the wish for peace on both sides. In the background we could hear the soundbombs thrown in the Palestinian Authority controlled H1 after the IOF had invaded for the third consecutive day.

We all walked down Tel Rumeida and Shuhada street, chanting slogans for peace and against the Occupation in Hebrew and English. The Palestinian children were stopped by soldiers by the settler school in Shuhada street. The rest of the group continued walking but were harrassed by settlers shouting abuse at us. The activists escorted some Palestinian women to their homes. 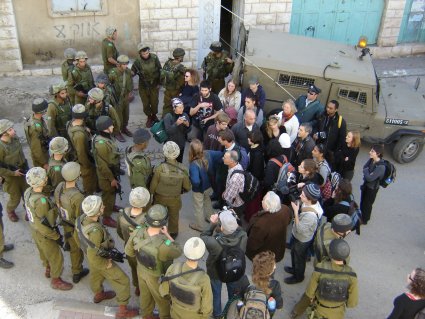 One settler tried to drive into the demonstration and when a human rights worker (HRW) filmed him he tried to push the camera out of his hand. He didn’t succeed and drove off slowly while making an obscene gesture at the activists.

The protest ended right after the military base, with the sound of rubber bullets still echoing through the Hebron hills.

Around 14:30 the HRWs decided to go down through checkpoint 56 into the Bab-al-Zawiya market area. At least 30 soldiers were present, shooting teargas and rubber bullets towards groups of Palestinian youth. The invading soldiers chased after the protesting youth, driving them back into King Hussein Street and al-Adel street.

On both streets burning barricades were erected by angry youth. Israeli soldiers ran through the small alleys between the streets to try to surprise the demonstrators while shooting rubber bullets at them. From several rooftops, Palestinians pelted stones at them. Soldiers penetrated further into the city as far as Hebron Municipal Hostipal. They stormed inside to look for the resisting youth, but couldn’t find them.

A group of 12 soldiers went down again to King Hussein street and were confronted by a crowd of about 100 protesting youth, who tried to push back the soldiers by throwing stones. Carts were set on fire as more teargas filled the sky and rubber bullets were shot. The IOF went back to checkpoint 56, but now the checkpoint itself was the target of stones being thrown.

On al-Adel street several burning barricades were erected, as soldiers invaded H1 again. Local residents expressed their anger to HRWs, because for a third day the busy market area had been taken over by Israeli soldiers and daily life disrupted yet again.

As the HRWs went back through checkpoint 56, soldiers again fired teargas into the market area and simultaneously closed the checkpoint. Several small children were no longer able to enter H2 and so were choked by the teargas. The HRWs demanded that the checkpoint be opened immediately. After a few minutes the terrified children could get through.

A few HRWs monitoring checkpoint 56 on the Tel Rumeida side witnessed a young Palestinian man being detained by the military. He had been there for half an hour handcuffed with plastic strips. He had a wound on his forehead and according to a local peace activist had been taken from the street for no reason. Two hours later he was taken away in an army jeep. 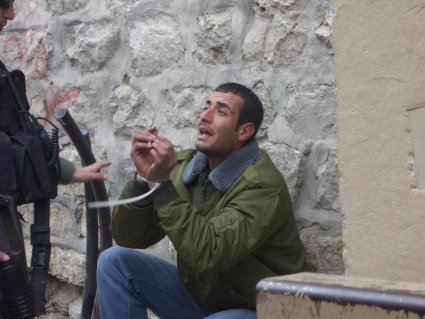