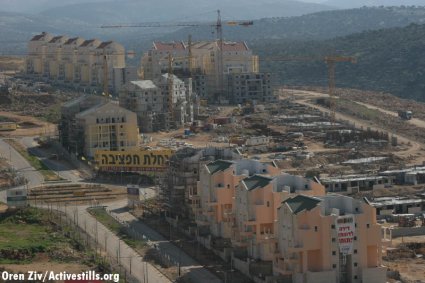 The Supreme Planning Council for Judea and Samaria recently legalized the largest-ever illegal construction project in the West Bank. Part of the project is situated on private land, which belongs to Palestinian residents of the village of Bil’in.

The project calls for the construction of 42 buildings containing approximately 1,500 apartments. The buildings, already in various stages of construction, are in the neighborhood of Matityahu East, which is located in the large ultra-Orthodox settlement of Modi’in Illit.

Peace Now and Bil’in residents filed a petition against the construction a week ago at the High Court of Justice.

About a year ago, following another petition by Peace Now and Bil’in residents, the High Court ordered a halt on the construction and occupation of the buildings.

Following an appeal to the State Prosecutor’s Office, the National Fraud Squad opened an investigation into those involved in the affair. The neighborhood is being built by Green Park and Green Mount, companies registered in Canada, along with two other companies: Ein Ami and Hefziba.

The laundering of the buildings’ construction allows members of the planning council, who were aware of the illegalities and did nothing to stop them, to avoid criminal charges and suits for damages.

The petitioners’ attorney, Michael Sfard, who asked that construction be halted, said the planning authorities knew about the illegal circumstances and did nothing to stop the construction.

He said the body administering the separation fence planned a route that would intentionally leave land for the neighborhood on the Israeli side of the fence. This move, apparently, came at the request of the Housing Ministry, which sought hundreds of dunams of Bil’in’s agricultural lands for Modi’in Illit’s expansion.

“The takeover of the lands was carried out by a conspiracy involving private developers and Israeli authorities. Thus, criminal companies that stole private Palestinian lands won the protection of the fence – which was intended as a means of security and became a tool for annexation – as well as backing from the planning authorities, whose approval laundered the offenses,” Sfard wrote in the petition. Justice Salim Joubran ordered the state to respond to the petition by March 6.

The petition stated that the planning council’s decision would “bury the criminal act and the impaired rights of ownership deep in the earth, and would quickly lead to continued construction of the neighborhood, as if no offense had been committed and there were never any rights of ownership.”

The planning authorities also refused to hear the claims of the residents of Bil’in who sought to prove their ownership of the land.

In September 2004, Moshe Moskowitz of the Civil Administration, the highest authority in planning and construction in the West Bank, wrote to Modi’in’s council comptroller that “construction authorization for the new project of Matityahu East was doubtless given against the instructions of the existing [master] plan and therefore was not within the licensing authority’s power.”

However, last week’s petition stated that Moskowitz and other members of the planning council, had a vested interest in legalizing the project, because the demolition of dozens of apartments would expose them to lawsuits by purchasers.

A lawyer for one of the settler’s associations is suspected of purchasing the land for the project with an affidavit from the mukhtar of Bil’in. The affidavit allegedly claimed that the security situation prevented the lawyer from entering Bil’in to obtain the property owners’ signatures.

According to the Central Bureau of Statistics, in September 2006, 33,200 residents were living in Modi’in Illit. 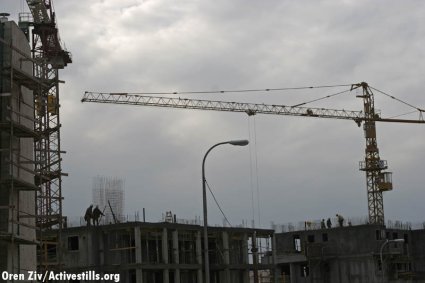