Today, at 13:00, internationals and local residents gathered at the main checkpoint into Tel Rumeida, known as the 56 checkpoint, to protest against settler violence and the continued closure of Shuhada Street to Palestinians. Children held signs in front of the checkpoint saying, “No to settlements. Yes to peace.”, “Freedom, Justice, Equality, Peace.” and “American tax dollars at work.”

The protest was entirely peaceful, though the IOF decided it was necessary to close the checkpoint, as well as Tel Rumeida St, hampering even further the Palestinian residents’ ability to move around their own home town. The IOF also posted soldiers on the roofs of surrounding buildings and brought an additional ten to fifteen soldiers and police officers along with their accompanying jeeps to ‘protect’ the Jewish-only colonies from placards demanding social justice. 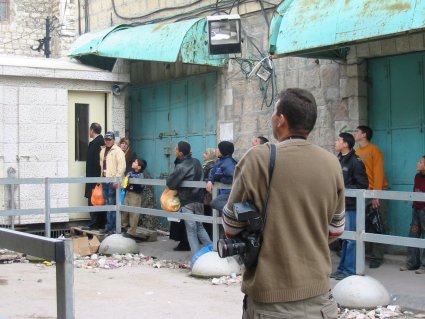 Shuhada street, which cuts through the centre of Hebron and leads to the Ibrahimi mosque, has been closed to Palestinians since 1994 when settler-colonist Baruch Goldstein massacred 29 Palestinians in the mosque.