Azzun ‘Atma farmer Sameh Yousef scored a small victory in his struggle against the theft of his land today when the IOF pledged to erect a fence on the edge of his field rather than 15 metres inside it. The IOF is constructing a second wall around the village of Azzun ‘Atma, 2 kms from the Green Line between the Israeli colonies of Sha’are Tikva and Oranit.

The IOF originally intended to ghettoize Sameh’s land by building a fence on its edge beside a colonialist road, but yesterday construction workers accompanied by soldiers appeared and began digging up his field 15 metres from the road. Sameh grows potatoes and corn on this land. Sameh protested as he had been previously assured the destruction would take place on the edge of his land. When 2 local human rights workers arrived they were threatened with arrest and the confiscation of their photographic equipment. Despite a 100-metre strip of topsoil and crops having been excavated and dumped beside the road Sameh was determined not to accept the loss of 27 dunums of his land and asked HRWs to accompany him the following day to non-violently resist this land theft.

topsoil from Sameh’s land dumped beside the road

Early this morning Sameh arrived at the scene with his two children and 8 HRWs, shortly before the arrival of the construction workers accompanied by the IOF. Once it was clear Sameh was not going to allow the annexation of his land, the DCO was contacted in order to clarify the original illegal order for the construction of the fence. After 6 hours of remonstrating, the DCO arrived to concede defeat in their attempts to annex Sameh’s land and vowed to construct the illegal fence beside the road on the edge of his land. The excavated topsoil and crops were transfered back to their original location. 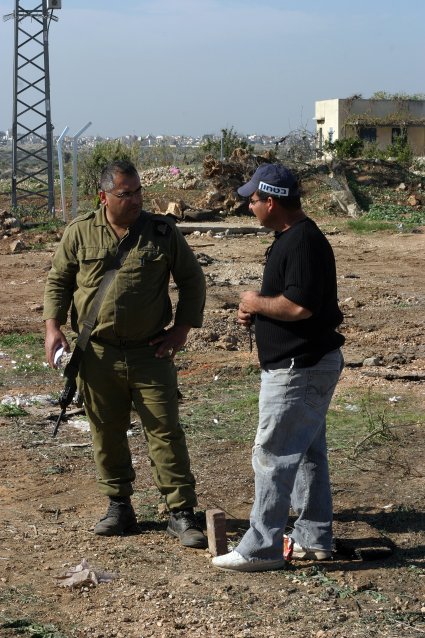 Despite a fruitful day of steadfast resistance, it remains to be seen whether the soldiers will keep their word.