Three days of protest in Hebron over Gaza massacre 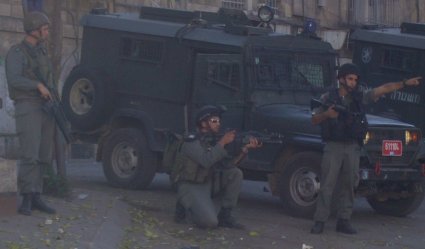 This report is a continuation from the report on the first day of protests .

Everyone in Hebron is deeply distressed by the Israeli massacre of 18 Palestinian civilians in Gaza. All shops and schools are closed for three days of official mourning. Palestinian youths gathered in the souk (market) again at 10.30am for a second protest against the killings. They began to throw stones at the Israeli checkpoint on the end of Shuhada St. leading into Tel Rumeida (checkpoint 56 in military parlance). At 11.16am Israeli soldiers began to fire tear gas over the checkpoint causing the youths to run away.

At 11.25am Palestinian youths set a tyre alight in front of the checkpoint and threw two Molotov cocktails, one of which landed on the checkpoint but caused little damage. At 11.30am a boy of between 12-14 years of age was shot by soldiers with a tear-gas canister and hit in the face. This broke several of his teeth. He was bleeding profusely. According to Israeli military rules, soldiers are supposed to fire gas canisters into the air. In practice they routinely aim them directly at Palestinian children.

At 11:37am the checkpoint was closed and several Palestinian residents who were not involved in the demonstration were denied access to their homes in Tel Rumeida. Israeli soldiers continually denied access to all residents of Tel Rumeida on the grounds that a possible “world war” could erupt due to the demonstration in Hebron, along with other such ludicrous claims. A group of residents, including many women and young children were denied entrance to the neighborhood, and forced to stand next to the soldiers as they fired at children in the distance. This group of residents was affected by tear gas that continued to waft over. One of the woman continually pleaded with army captains to allow them to go to their homes. Finally, one captain agreed to do so.

At 1:22pm tear gas was fired by the Israeli army at the demonstrating children. HRWs broke open onions and distributed pieces to the bystanders.

At 1:26pm a Molotov cocktail landed on the roof of the large vegetable market stand in the middle of the market square. The owner and bystanders rushed to put out the fire.

Early afternoon after the Molotov cocktail was thrown, soldiers took up positions in front of the checkpoint behind a large crowd of children who were bystanders to the whole situation. The soldiers pointed rifles loaded with live ammunition at the children. A HRW with a video camera went up to the soldiers and asked that they point their guns away from the children. They ignored the request but one soldier told the HRW to move back. He moved back a few paces and circled around the soldier in order to record on video the vantage point of the soldiers so as to prove that any rounds fired would have seriously injured or killed any child hit.

A soldier in front of the same crowd of children was seen to be pointing a primed gas canister at them. A HRW repeatedly asked him to point his rifle away from the children and was ignored again. The close proximity of the round would have seriously injured or possibly killed anyone it hit. 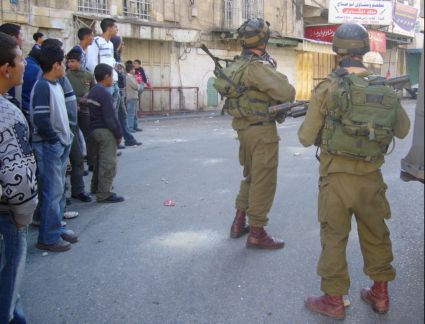 At 4 or 5pm the border police arrived and proceeded to clear most of Baab Zawiyye (the Hebron downtown area). 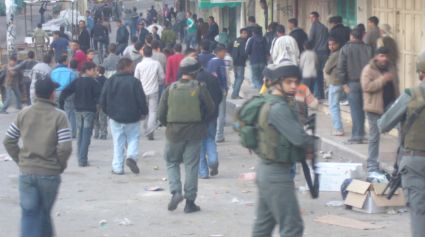 They fired several rounds of rubber-coated steel bullets at Palestinian children and several passersby who were hundreds of meters in the distance. At this point the demonstration was already coming to an end.

The protest started after Friday prayers at noon. Israeli border police had set themselves up with two APCs on the H1 side of checkpoint 56 (H1 is nominally controlled by the Palestinian Authority). Children were protesting in the market area. This time the soldiers alongside the Border Police were better organized, riding in three border police vehicles and one army APC. They arrested one protester, a Palestinian youth of about 12-14 years of age. His arrest was photographed and videotaped by HRWs.

The Israeli vehicles and foot patrols forced the protesters further away by shooting at them with rubber-coated steel bullets. Further down the street protesters set up a barricade to slow down the soldiers and police. The police and army were less aggressive than previous days and seemed to be creating a barrier for the checkpoint. Several rounds of rubber-coated steel bullets were fired intermittently during the afternoon alongside two tear gas canisters.

A squad of Israeli soldiers came out of the checkpoint carrying rifles loaded with live ammunition. HRWs pointed out that it is a war crime to fire live rounds at civilians. Before this the officer in charge of the border police was asked why they were carrying live rounds when the children posed no real threat to them or the checkpoint. All afternoon, the police and army were less aggressive than the previous day.

By 5pm when the HRWs left, the protest was winding down. The market square was forcibly kept empty of Palestinians all day, and cars and taxis were not allowed through or into the market.