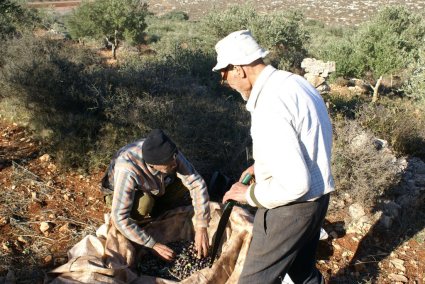 On Wednesday I harvested in the village of Qaryot with another international volunteer and 2 Israelis, assisting 80-year-old Salimon, his brother Aziz, and his 27-year-old son Ahmed. We were greeted in the morning with a hearty “Buenos dias!” and warm smiles from the elder men. Both Salimon and Aziz spent 20 years working in Brazil, and during that time were unable to come home to see their children grow up. Between them they have a very large family and over 1,000 trees in the area, which is sandwiched between a few relatively new Israeli settlements. One is called Gilad — an extremist outpost that is illegal even by Israel’s standards.

Salimon and Aziz are friendly men of few words. We spent the day communicating through a bit of Arabic and also Spanish and Portuguese, which both men and some of the volunteers happened to speak. Salimon, whose hospitality is in true Palestinian style, watched us carefully and often re-lit the cigarettes he handed out, which must have gotten damp at some point. Aziz spent the day pruning the trees silently with his small saw, occasionally saying “Aaaiiii-wwaaa, tamam” (yes, good) and “Bueno” (good), when he cut a branch down and volunteers began to pick olives from it.

Earlier in the week Israeli settlers hiked down the hill to throw rocks at Palestinians harvesting in Qaryot, sending one man to the hospital with a head injury. Many families were afraid to return to finish picking, but the brothers who have land in the most dangerous area, were determined to finish.

The road-block made by the settlers.

We began the morning picking close to the settlement road. Within 10 minutes we were approached by three Israeli soldiers and three Israeli border policemen, who told us that we needed to stop for the day. Although we asked to see a court order that stated so, we were offered no explanation except “someone is coming with a map”. The brothers returned to picking and the volunteers attempted to join them. The soldiers demanded that we stop and not touch any olives until more of them arrived with answers to our questions.

Eventually more vehicles of soldiers, border police, and a military lawyer showed up. They also could not answer our questions, and as we stood around waiting and wasting precious picking time, they pulled out a map and started arguing over what to do. The founder of an Israeli human rights group with experience in the area showed up after our phone calls. He negotiated with them over an apparent land dispute that began recently when settlers created a dirt mound roadblock in order to claim some of the land as their own. One soldier even said: “It’s obviously Palestinian land, let’s just let them stay,” but it was decided that we were only allowed to harvest on the other side of the roadblock for the day, closest to the village. 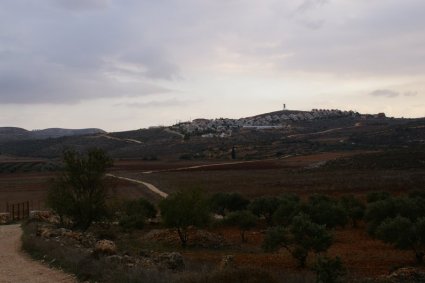 Following the lead of the elders, we agreed and moved to an area that was not claimed by the settlers to continue picking. This felt frustrating since the trees are hundereds of years old like the village, and the settlement is only about 20 years old. Even though some of the soldiers and police disagreed with each other about who the land belongs to, the message this situation sends is pretty clear: it is possible for a simple mound of dirt placed in the road by Jewish extremists to throw legal borders into upheaval, effectively blocking the rightful owners from accessing and harvesting it.

The next day we met Salimon and Aziz again. After a successful negotiation on behalf of the human rights group, we spent the day picking olives beyond the roadblock, on the “disputed” land directly next to the settlement road. This time we brought more volunteers due to the high risk of attack. Throughout the day about two Humvess or jeeps full of Israeli soldiers and police watched us from a short distance. They claimed it was for our protection, but were clearly facing us and watching us with binoculars, not the settlement.

Eventually Aziz picked up his tarp and bucket and walked right over to the settlement entrance road, a couple feet from a guard dogs fence and about 200 feet from the nearest home. This is the closest to a settlement that any family I’ve been with over the last week and a half has dared to work. I get the impression that Aziz is not scared of anything, even though he said that most of his children are afraid to come harvest the land with him. The soldiers and police pulled their vehicles up right next to us, but we ignored them and continued picking until the brothers decided they were finished with the area for the day.

We returned to the village piled onto a tractor with large bags of olives. Aziz’s kaffiyeh blew in the wind as he smiled and waved to greet neighboring farmers. Salimon rode ahead on his donkey. Ahmad reported that we had picked a few hundred kilos of olives, and thanked us warmly for our presence. In the following days we will continue to have an international presence in Qaryot, until all of the olives are picked.