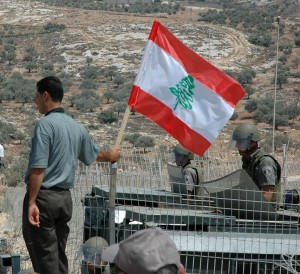 Today on Friday August 4, the people of Bil’in joined by Israeli and international supporters marched to the apartheid wall and attempted to cross the gate which separates villagers from their land. They bore Palestinian and Lebanese flags alongside black flags of mourning in memory of over 1,000 people who have been murdered in Gaza and Lebanon, including the horrific massacre in Qana this past week. They delivered words and posters bearing photos and messages rejecting the Israeli aggression which has caused one of the bloodiest months for the region. The demonstrators were pushed back by Israeli military violence: sound grenades, rubber bullets, and tear gas.

Demonstrators showed peaceful, but defiant, displays of the flags despite the cadre of armed military personnel, now able to hide behind newly constructed reinforcement fences. The occupation forces immediately advanced through the gate to take strategic positions overlooking the activists. At a distance of hundreds of meters, the soldiers began lobbed grenade-launched tear gas canisters, throwing concussion grenades, and firing rubber bullets. In the ensuing attack: Margaret, a 52 year-old participant from Scotland was shot in the back with a rubber bullet; Yasir, a participant from Spain was shot in the back with a rubber bullet; and John, a 53 year-old participant also from Scotland sustained facial injuries from a concussion grenade thrown directly at him.

Two large brush fires were ignited by grenade-launched tear gas. When villagers and activists attempted to return to put the fire out, the army advanced and renewed their attack of tear gas and rubber bullets on those who were clearly attempting to stop the rapidly spreading blaze. Nearly totally blinded and inhaling thick smoke, those attempting to extinguish the fire endured continued long-range bombardment of tear gas and rubber bullets by the soldiers hidden behind the fence. The fires were successfully extinguished in the end after 40 minutes, despite the attack.

Since the onset of the recent violence in Gaza and Lebanon, the people of Bil’in have maintained a weekly protest in support of those enduring continued Israeli attacks.