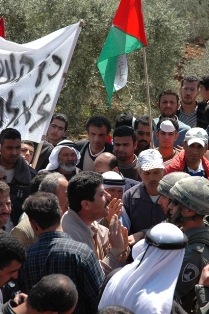 Today, August 15th 2006, at approximately 1 am, soldiers of the Israeli Occupation Force (IOF) launched a military incursion into the Askar Refugee Camp (population 15,000), in the Nablus region. During the military operation, two homes were bulldozed, at least four homes were occupied, seven people were reported injured, one woman died due to being blocked from reaching a hospital in time by the army, and at least five were arrested.

People inspect the rubble of a demolished home

The incursion lasted approximately ten hours, and ended around 11am. The siege utilized a large military force including three armoured bulldozers, over twenty military jeeps, three armoured troop transports and at least seven hummers. During the attack, two homes were completely demolished by bulldozer, and four homes were occupied by the IOF and used for military purposes. This process included using the windows of homes as sniper positions. While such operations were ongoing, families were forcibly removed from their homes and made to congregate in the street or in neighbours´ homes. Also, during the assault, many automobiles were smashed and shot, while at least one was burned. Following the incursion, the electricity was cut in the entirety of Askar Camp.

There were at least eight injuries during the assault according to the manager at Rafidia hospital, the Palestinian Red Crescent Society (PRCS) and the Union of Palestinian Medical Relief Committees (UPMRC). Rafidia hospital reports treating four individuals, two of whom were shot by rubber coated metal bullets, and two of whom were shot by live ammunition. The PRCS reports treating two individuals, one shot with rubber coated metal bullets, and one hit with shrapnel in the back. In addition, the UPMRC treated one woman who was injured in her eye by shrapnel from a concussion grenade. The nature of the other three injuries are unknown.

During the early hours of the operation, an elderly woman of the Tibi family had a heart attack, and because her ambulance was prevented from reaching the hospital in a timely manner, she died upon reaching al-Watani hospital. After the woman was transported via ambulance, the IOF prevented the family from arriving to the hospital to view the body. After the woman was evacuated from the house, the IOF occupied the home, and used it as a firing position. From this occupied house, IOF soldiers fired live ammunition and threw concussion grenades at international activists and unarmed Palestinian youths.

All of the arrests were from the Annadi family. During the incursion, the mother, three cousins and nephew of a man named Murad were arrested and transported to an unknown location. Murad is an employee of the Palestinian Authority.

Seven international ISM activists, two Palestinian ISM activists and one Palestinian volunteer with the UPMRC joined with the people of Askar to provide support during the incursion. During their work, the IOF assaulted the internationals, attacked them with concussion grenades, and fired live ammunition in their direction on four separate occasions. The ISM activists were able to de-arrest five men, four by negotiation and advocacy and one by physical intervention.

Such incursions are a frequent occurrence in the villages, towns and camps around Nablus. Approximately forty days ago, the IOF came into Askar Camp and assassinated one man.