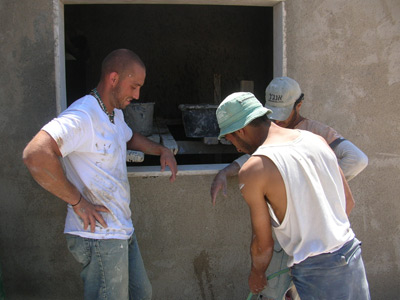 The Israeli Committee Against House Demolitions (ICAHD) has been instrumental in challenging one of the most nefarious features of the Israeli occupation of Palestine – the demolition of Palestinian homes. ISM’ers have begun to pitch in and lend a helping hand with ICAHD’s summer rebuilding camps when not supporting non-violent direct action against the occupation in other regions of the West Bank. ICAHD is currently constructing a home in the Anata community, which nebulously falls under East Jerusalem and West Bank designations. This is the fourth summer in a row that ICAHD has organized a house construction summer work camp for internationals volunteers.

As bombs and rockets are launched on Gaza and Lebanon, internationals and Palestinians are working under the radar to reconstruct a Palestinian home that was demolished by the Israeli Army. What Israel destroys, Palestinians rebuild with the help of allies. Many Palestinian homes are subjected to military demolition every year. Four main reasons guide this destructive activity: Palestinian homes are demolished to assassinate alleged terrorists, as collective punishment for family members of alleged terrorists, to clear a path for the Apartheid Wall, or because the houses are deemed illegal under Israel’s Apartheid laws. 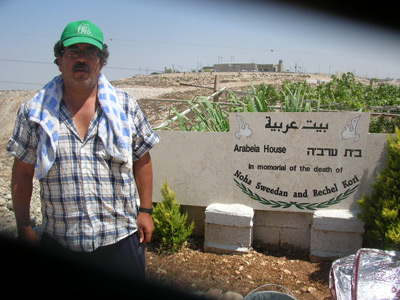 The reality is that many homes have been demolished for these or apparently no reasons by the Israeli military and dozens others have been destroyed by settlers in an effort to terrorize Palestinians into leaving their homes, community, and land.

In order to struggle against this injustice ICAHD organizes direct action to block the demolition of homes and it also take on the task of rebuilding, not just homes but also relationships between Palestinians, Israelis, and internationals through shared work. This is a form of active non-violent direct action against the occupation; the very act of building homes for Palestinians is illegal in this racist power structure.

In the Anata community, entire sections have been demolished as part of the ethnic cleansing of “Greater Jerusalem”. The ICAHD project currently underway is a challenge to this institutional violence. In just a few days a Palestinian family will receive keys to their newly rebuilt home. The community council has selected this family among dozens to receive this gift of solidarity and as the work camps continue, more families will be able to reclaim their homes. 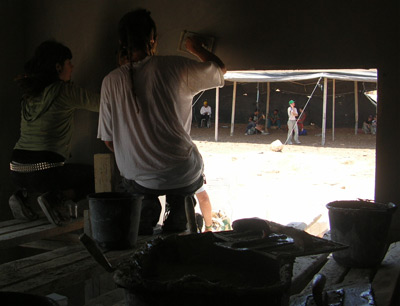 Israeli volunteers work on the house

Salim is a member of ICAHD and an example of Palestinian summoud, steadfastness; his family’s home has been demolished four times by the Israeli military and each time ICAHD has rebuilt. Now, in its fifth reconstruction, Salim has named the home Beit Arabeia and dedicated it as a center in memoriam to Rachel Corrie and Noha Sweeden. This is the base camp for internationals who work arduous hours building. This is also where folks convene to sharpen their analysis of the occupation and meet other activists involved in local struggles such as Ta’ayush, Anarchists Against the Wall, Bustan, Active Stills, and the Bio-Falha Budrus Project.