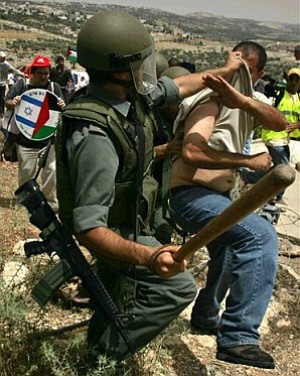 The weekly demonstration against continued construction of the security barrier in the village of Bil’in resulted on Friday in the injuries of one border policeman and several protesters.
Hadash leader Mohammed Barakeh, who was present at Friday’s protest, told Internal Security Minister Avi Dichter that he had a videotape on which a Border Police commander was captured instructing his forces to “break protesters’ legs,” Army Radio reported.

Barakeh said that he intended to file a complaint with the Police Investigative Unit, and maintained that none of the protesters had attacked any of the soldiers or police present.

Bil’in has been one of the more volatile foci of anti-fence demonstrations. Various Palestinian and Israeli organizations band together to organize weekly protests, which not infrequently turn violent.