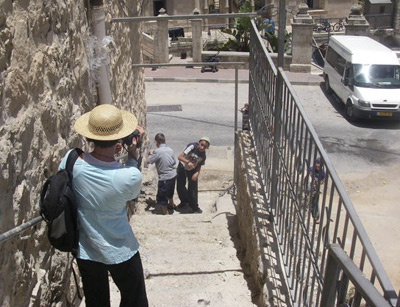 June 14th: At approximately 12:30 PM, two Human Rights Workers (HRWs) on Shuhada Street noticed a group of between 8 and 10 settlers boys between the ages of 9 and 12 carrying plastic bags filled with water. The boys were coming out of the Beit Hadassah settlement and were headed up the stone stairs towards Qurtoba, a Palestinian school building. The HRWs followed the boys to the stairs and were attacked with the bags of water. The soldier on duty at the Israeli military post spoke to the HRWs in Hebrew and made gestures for them to leave. The HRWs told the soldiers they only spoke English and asked him to get the kids to stop attacking them. The soldier did nothing and the children began throwing rocks at the HRWs.

The HRWs went to the top of the stone stairs where Palestinian workers were constructing a cement wall along the pathway toward the Qurtoba school. The HRWs asked them if they were having problems with the settlers and they said that rocks had been thrown at them. A soldier who spoke English told the HRWs to leave but because the kids who were throwing the rocks and bags of water were still present, the HRWs refused to leave.

The Palestinian workers informed the HRWs that they would be going on a lunch break and asked the HRWs to stay at the site because they were afraid the settlers would destroy the cement while it was still wet. The HRWs agreed to do so. 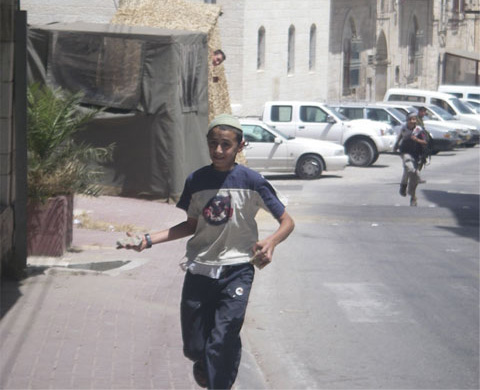 Soon thereafter a jeep with four soldiers arrived. One of them angrily confronted the HRWs and said that if they didn’t leave, that the police would be called. The HRWs agreed that that would be a good idea if the police were called considering the soldiers weren’t preventing the kids from throwing things. The solider said that they must leave because it was a Jewish-only place. One HRW informed this soldier that she, in fact, was Jewish and that she could thus remain. The soldier then insisted, “No, you are not Jewish.” The soldiers then threatened to arrest the HRWs and the two proceeded up the staircase a few feet.

After some time, the HRWs went back to Shuhada street following some of the same settlers who were acting suspiciously. As the HRWs were on the street, the solider approached them. One of the settler children followed behind him, hiding a very sharp pencil behind his back. It appeared as if he wanted to use this as a weapon against the HRWs.

At this point, the police arrived. They asked if anything was wrong and the HRWs informed them of the settler violence that had ensued. The HRWs, soldiers, and police talked for about 10 minutes. The policeman said a complaint could be filed if desired, otherwise- the HRWs weren’t allowed to film the soldiers. The HRWs informed that they were only filming because the settlers were throwing rocks and water–first at the Palestinian workers, and later at the HRWs themselves. After this, the police and soldiers left and a shift switch at the soldier post occurred.

Soon after, four settler kids entered the soldier’s post. One of the settlers emerged and lunged threateningly toward a Palestinian woman and her son as they began to walk down Shuhada street away from Beit Hadassah settlement. An HRWs shouted “Stop!” which frightened the settler children and caused them to move back into the soldier’s post. 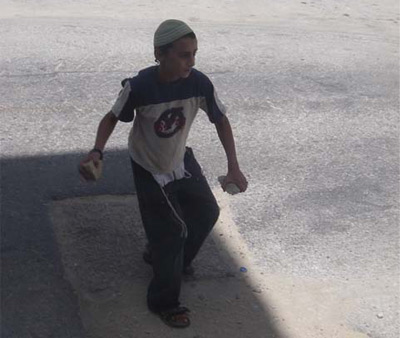 Two settlers began throwing large rocks at the HRWs. The HRWs pleaded with the soldier to make the settlers stop, but he said, “No, I can’t!” The HRWs said that it was his job and he replied, “I don’t give a fuck about my job…Go back to England!” The settlers continued to throw many rocks at close range, attempting to steal the camera, and hitting one HRW with his fists. All of this happened as the solider watched, doing nothing. One of the HRWs was bleeding on her leg and arm. The police were called and the settlers stopped throwing rocks. When the HRW asked the police to come, they refused because the settlers had retreated. The police said they would only come if the settlers were still attacking- but the HRWs informed the police that the settler violence would start back up very shortly. Sure enough, as the phone call ended, the settlers began throwing rocks again.

Since the police would not help, the HRWs called Christian Peacemakers Teams (CPT) and Ecumenical Accompaniment Program for Palestine and Israel (EAPPI) and asked if they could come help. They agreed to come.

It should be pointed out now how absurd it was that the only people interested in trying to resolve and de-escalate the situation were unarmed human rights workers from EAPPI and CPT, instead of the people whose job it is to protect the population of the neighbourhood – the soldiers and police. Another HRW called the police again and the police said they would come only after they were informed that a female HRW was bleeding as a result of the attacks. A settler van arrived in front of Beit Hadassah and the settler boys got in and left.

About seven minutes later, a police jeep drove by but did not stop. An HRW followed the jeep on foot. She found it at Checkpoint 56 and told the police that the settlers had been extremely violent. The police officer suggested that she go to Kiryat Arba police station and file a complaint. She agreed to do so. At this point two women from CPT and seven members of EAPPI arrived. 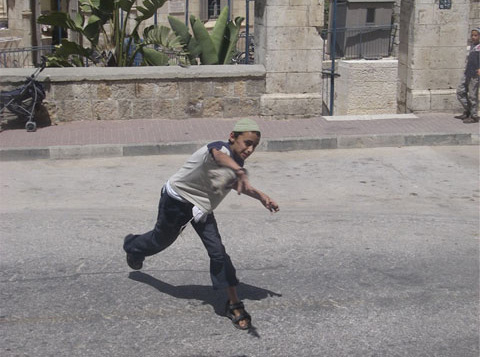 At Kiryat Arba police station, the testimony took four hours to record. The police officer was sympathetic and appeared to be rather shocked at the video footage and especially at the soldier refusing to intervene. He found out who the soldier was and said he would speak to him.

Meanwhile, back in Tel Rumeida the CPT and EAPPI were informed about what had been happening, who the soldier was, and where the kids were throwing rocks. They were also were shown the wet cement that was recently constructed. The CPT remained at the checkpoint while the EAPPI toured Hebron.

The solider who was allowing the settlers to throw the rocks engaged in throwing stones at the settler kids, in a playful manner. In exchange, the settlers would then throw rocks from the parking lot below the pathway to Qurtoba school at the remaining HRWs above. The kids would hide behind the Israeli ambulance that was parked there, which the solider hit a few times as he threw his rocks at the settlers. A few Palestinians were escorted along Shuhada street because some of the stone-throwing settlers were still present.

The Palestinian workers returned and asked the HRWs to come back at 7am the following day to ensure there would be a presence there should the settlers return and harass them. The HRWs agreed.

As the situation calmed, the HRWs began to return home. As they walked past the checkpoint, they noticed four Palestinian women being detained. EAPPI and CPT were present as well. The two soldiers at the checkpoint weren’t allowing them to enter because they didn’t have the proper papers. One woman called her husband to bring her passport, which was an American passport. The HRWs tried to speak with the soldiers but they would not engage in conversation. One of the soldiers even pulled out his wire handcuffs and threatened to use them on one of the HRWs. The three other Palestinian women at the checkpoint who did not have their papers were refused entry. Dialogue with the soldiers was attempted by all the HRWs, but entry was still denied.

During all of this, a new regiment of soldiers was touring Hebron. One soldier informed an HRW that these new soldiers would be even harsher than the ones that had been present that day…Let us hope not, insha’allah!