New
Home / Journals / The Double Standards of the Israeli Army

The Double Standards of the Israeli Army

“I Am Not a Good Jew”: Israeli Soldier Brutality and Incompetence
An editorial by a human rights worker in Hebron 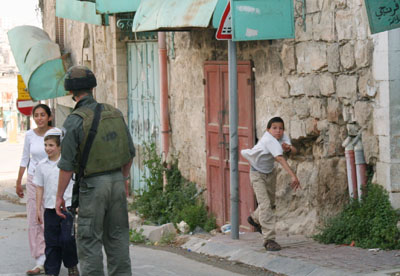 Israeli settler children throw rocks while soldier does nothing

Yesterday I went to the demonstration in Bil’in which started out fun and happy, with people singing songs and generally having a good time as we usually do at these demonstrations.

Upon confronting the soldiers there was some pushing and shoving, some sound bombs were tossed into the crowd by soldiers, and soon the soldiers started firing rubber coated metal bullets without provocation. Two ISM activists were hit in the head with rubber bullets, one seriously. He suffered a brain hemorrhage but doctors say he is going to be okay. The other ISM activist required stitches.

So, this is what happens at demonstrations. This is how the soldiers react. Are you ready to learn about what happens when soldiers are put in a situation where they are supposed to control violent Israeli settlers? Ok here we go!

Today in Tel Rumeida, a fellow ISM volunteer and I were walking a Palestinian child home. In order to reach his home, he has to pass by the Tel Rumeida settlement where settler children and teenagers were standing around, waiting for him to pass so they could throw rocks at him. This happens on a daily basis, so we are prepared.

We accompanied him so that, hopefully, the rocks would hit us and not the child. I had a video camera ready to record the rock throwing. We walked up the hill and, predictably the kids started throwing rocks. There were three soldiers standing around who — instead of controlling the children — came after me.

They asked me to stop filming, I said no. They demanded that I give them the camera, I refused. Then, as the settler children were throwing rocks and me, my fellow ISMer and the Palestinian child, the three soldiers tried to take the camera from me. They were unsuccessful because they were fat and they have not studied Kung Fu.

While my fellow ISMer was trying to get the soldiers to control the kids, a teenaged settler girl said “Jews do not throw rocks, Arabs throw rocks,” and she was standing in front a bunch of settler children who were throwing rocks at us! 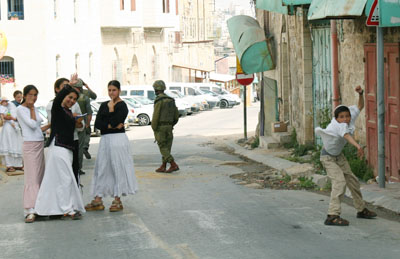 At this point more soldiers arrived. I asked them to control the settler children so the Palestinian child could go home. They told me they couldn’t control the children. I told them, “All it would take to control these kids is some tear gas or a sound bomb, or, you know, how about some rubber bullets or live ammunition like you shoot at Palestinian kids who throw rocks?”

Eventually, I decided it would be better off if I went up to the apartment to film. That way I would not get attacked. A soldier saw me retreating, and tried to take my camera again. He was unsuccessful. I began filming from the second floor balcony of the apartment building. I caught the soldiers and settlers attacking members of TIPH (Temporary International Presence in Hebron). As soon as the settlers saw me filming, they started throwing rocks at me again and yelling they hope the Arabs kill us.

In my opinion, if these people want to get good at throwing rocks, they ought to take lessons from the Palestinians, because they couldn’t hit a fucking elephant if it was standing in front of them. Eventually I went into the apartment to film from the window so I would not have to dodge rocks. The police finally arrived and the situation died down. 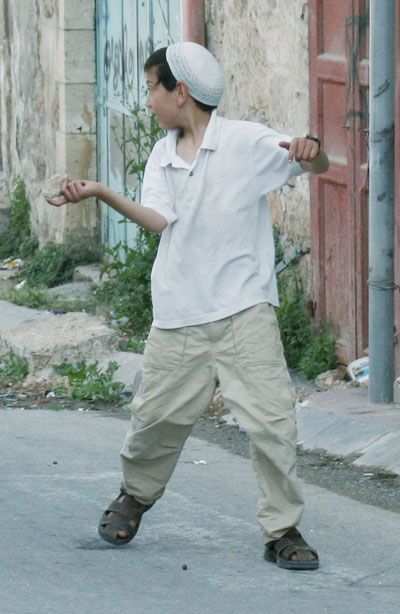 So, this is the irony of the situation. Palestinians and internationals peacefully demonstrate and get shot with rubber bullets. Israeli settler children throw rocks and hit and kick people and the soldiers refuse to stop them and instead attack the internationals.

So, this is Tel Rumeida during Shabbat, the Jewish holy day, and the Jews here act like fucking animals. I wonder, what would Moses do if a Palestinian child was walking past him. Would he throw rocks? Are Jews obligated under Jewish law to throw rocks at Palestinians? I feel like I am obligated under human law to protect anyone from attacks from these fucking religious extremists.

Oh, and by the way, while I’m still pissed off, I should write about the fact that Palestinians here are suffering severely from the funding cuts. People are so poor. A friend of mine who works for the Palestinian Authority hasn’t been to work in 20 days because they can’t pay him and he has $30 to his name.

The international community is punishing Palestinians because they voted for Hamas and it’s turning into a tragedy. One man told me today that economically, the past 3 months has been the worst it has ever been. So please, people in the United States, if you have not written to your congressperson to vote against the so-called Palestinian “anti-terrorism act,” HR 4681 You can do this by email here.