Sunbula’s journal: “Farmers in Bil’in successfully plow their land behind the Wall”

Today there was some plowing of the land around the outpost in Bil’n and as always and international presence was needed to help ensure soldiers didn’t attack Palestinians (the Popular Committee in the village decided to build this outpost at the end of last year in order to “counter-settle” the land being taken from the village. See this article).

Trying to cross the fence in order to get there has become harder since I was last there in January. There is now a guard tower on the “security” road with soldiers in it. They can’t really stop us or Palestinians from going to the outpost because of a court order permitting the residents from reaching their land but they can harass plenty as they do. There still hasn’t been a response to the village’s petition to stop the building of wall on grounds of illegality, but instead a court order permitting the residents to pass through a gate in the fence. In addition to the army, there is also the Border Police and civilian security for the settlers.

Another ISM-er and I had to get to the outpost in near-dark with one of the village shebab (youth) and we were stopped by one of the Israeli patrol cars, and between their lack of English, my broken ‘ammiyya (colloquial Arabic) and Ashraf’s broken Hebrew, there was some awkward communication which I think eventually frustrated the guy enough for him to indicate to us to buzz off.

I was eager to know what had been going on since the last time I was there. The outpost has expanded a tiny bit and there are a few more places to sleep outdoors. However, my friend told me he is usually the only one from the village who is there regularly, all the time, because the other shebab are afraid to come to the outpost now. The police have been turning up to their homes and either arresting them or confiscating their IDs for allegedly throwing stones at the Friday demonstrations against the wall. His brother is among these and he just got out of jail two months. So, basically, internationals are needed more than ever to be permanently at the outpost. There was only one visit from the army that night, one of their more routine stops for no particular reason other than to scare the Palestinians. I was more disturbed by the mosquitoes buzzing around my head all night. 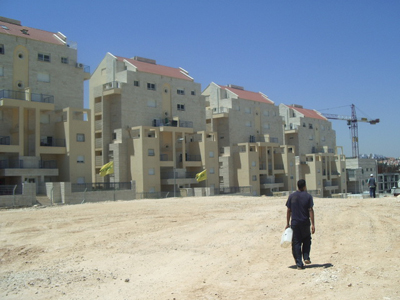 On Tuesday, for the planting and plowing, we were joined by a group of older Israeli peace activists and some more internationals. Some of the Popular Committee leaders came along with youth and some of the farmers. 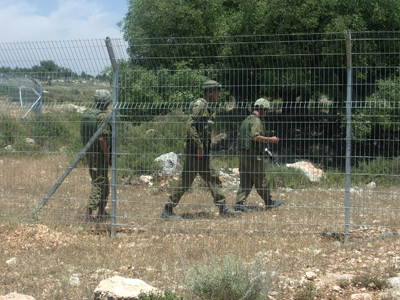 Plowing some of the land took place successfully, along with some sheep grazing (they were adorable) and we started digging a hole in the ground for an eventual bathroom. Everyone took their turns at digging and scooping up earth in a pail. There’s something about the earth that gave it a really nice texture – Palestinian earth that has so many stones in it and is so fertile.
There was just one visit by an army jeep that seemed more curious than anything else to check out what was going on. It’s somewhat upsetting to think that farming your own land needs to be a planned “action” with international presence, and that despite an order from the court of the occupying country saying you have the right to do.

Graffiti inside the outpost: “we are staying and will not leave”