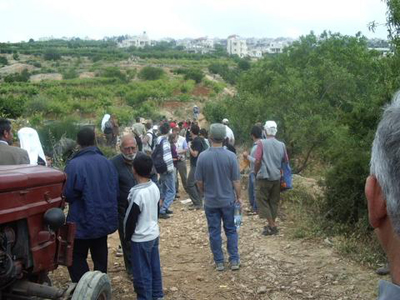 20th May: From Jerusalem to Beit Omar, you need to change taxis three times in order to get there, partly because of two Israeli checkpoints. It is a small village outside Hebron (al-Khalil) past Bethlehem. An international presence was needed there today in order to help the farmers farm their land outside the village which is being encroached upon by an illegal settlement. The settlers have been harassing the villagers and attacking them to stop them from working on the land, in order to try and annex more of it. We were received in the house of Ibrahim Abu Marya and his family and then walked with other internationals from the Christian Peacemaker Teams and Israeli anarchists and peace activists to the fields. Army jeeps were driving past us and when we got to the land just in front of the settlement, there were soldiers gathered. I thought they were going to harass us, but they were mostly trying to stop the settler children from coming and provoking us and the villagers. The settler children, some of them probably under 10, were gathered there and cursing at us in Hebrew, shouting such nice things as “Nazis”, “sons of whores” and “Hitler needs help” and giving us middle fingers. This is one of the things I detest most about the settlers – they send their little children to attack Palestinians and peace activists because they know the army can’t and wont do anything against them. Talk about cowardice. The soldiers today seemed rather indifferent to the settler kids and seemed to have a bored “I want to go home” expression on their face, which I don’t blame them for. 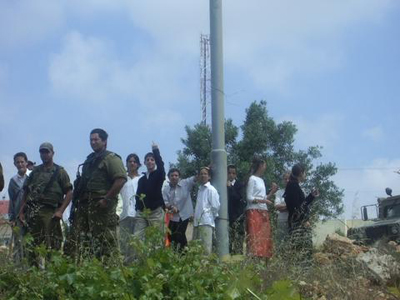 We were lucky in that sense that they didn’t help the settlers today. This behavior from settlers is pretty mild compared to what goes on in Hebron city, where the faithful of Meir Kahane, Baruch Goldstein, the Kach and other such nutcases live; they are considered racist and insane even by mainstream Israeli political standards, which is saying something, but they have money and influence in the Israeli establishment and from sections of American Jewish communities, who believe they are helping to settle the land of Greater Israel. 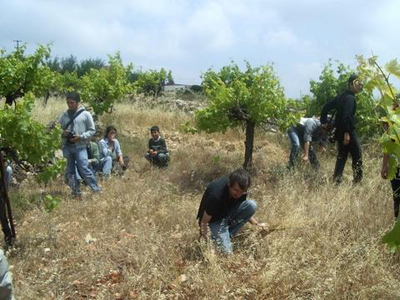 The internationals and Israelis helped pull weeds from the land and just stay there to prevent the settlers from attacking. The army is more likely to restrain them, in fact much more likely, when there are internationals present, which is why the presence of international solidarity activists is so important and why the Israelis harass people at the borders whom they suspect of being activists. The army is less likely to beat and shoot Palestinians at demonstrations when there are international faces present, watching, photographing, recording, and protesting. It was fairly peaceful today overall, which is the way it should be more, especially after the large number of injuries at this Friday’s protest in Bil’in village. It was also fun, everyone was impressed by my Arabic and the village kids surrounded me and kept chatting with me about various things. They also demonstrated their ability to sing, in unison, “we shall overcome” and “we will rock you”, clearly showing their varied and eclectic taste in western music. I also learnt lots of vocabulary relating to nature and plants, which should hopefully be helpful. 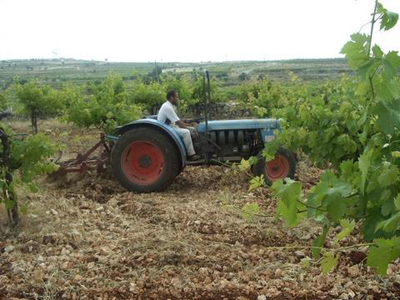 I am off to Ramallah tomorrow, leaving Jerusalem, for the ISM office and the training for newly arrived people. Excited to meet people I had befriended last time and my good old first Palestinian friend, Mansour the big joker from Biddu.