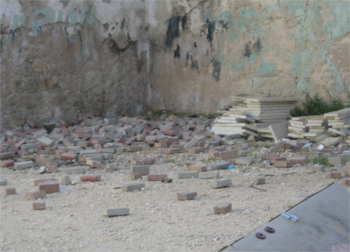 Settlers from Beit Hadassa settlement in Tel Rumeida on the outskirts of the old city of Hebron vandalised a school path at Qurtuba school which is used by local Palestinian children.

The path was being built with money from TIPH (Temporary International Presence in Hebron). The builders had just laid bricks along the path above Beit Hadassa settlement.

At 2pm on April 26th builders had stones thrown at them by children from Beit Hadassa. Shortly afterwards international Human Rights Workers (HRWs) saw an adult settler looking at the building work and making several calls on his mobile phone. Between 6 and 7pm yesterday a group of 20 adults and children from Beit Hadassa climbed the steps to the school and began tearing up the bricks and throwing them down the steps. 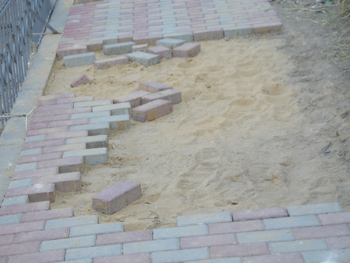 Soldiers are stationed at a guardpost 50 feet away. Local Palestinians said soldiers did try to intervene but did not stop the vandalism. Police attended but no arrests were made.

A Palestinian family living behind Qurtuba school said that when the settlers approached the school they were frightened that they would attack them and they called their children inside the house. Palestinian residents in Tel Rumeida are subject to regular attacks by extremist settlers. Qurtuba school has been daubed with graffiti such as ‘Gas the Arabs’.

Frequency and seriousness of attacks in Tel Rumeida has been increasing over the past weeks. The most serious attacks occur on shabbat. Last Saturday 30 settlers attacked a Palestinian shop on Tel Rumeida Street and assaulted a young Palestinian (see
https://www.palsolidarity.org/main/2006/04/23/settlers-attack). HRWs are afraid that more attacks will occur this Saturday and have written an Open Letter to the Police (see
https://www.palsolidarity.org/main/2006/04/26/open-letter-heb1/)