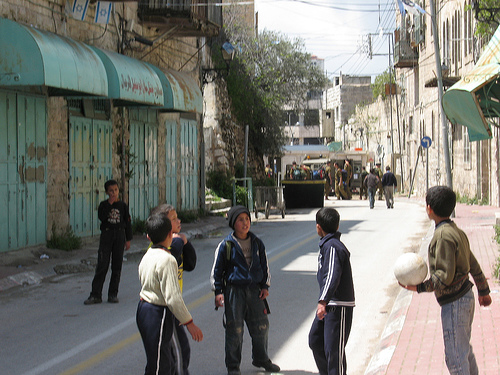 Everyday but Friday, we are out on the street watching as children go to school, which starts at 7.45am. It’s usually quiet, though today about 15 visiting settlers attacked Anna and BJ and 3 EAPPI (Ecumenical Accompaniment Program in Palestine and Israel) people. They are not badly hurt (one was kicked and another hit on the foot by a stone) and are now still at the police station making a complaint.

I went down to Shuhada street to see them and on the way back called at the house of a doctor. It has been Passover holiday and there was a closed military zone for three days. During that time, soldiers who often use his roof for surveillance hung an Israeli flag from his roof. They went into the kitchen of his house, knocked everything off the bench and attached the bottom of the flag to his kitchen window. They also abused his niece who was studying in the house and damaged the desk she was using.

When I saw the flag yesterday, it seemed like the episode in the film “Sound of Music”, when Captain von Trapp comes home from his honeymoon and finds the swastika hanging from his house! However, the doctor does not have the luxury of pulling the flag down. He would be arrested! I approached a soldier outside the doctor’s house and said the flag should not be there. Baruch Marzel (stood for the Knesset and didn’t get a quota) and two other settlers came past and spoke to the soldier. They called me Nazi etc, which is nothing new. They yelled at me and I probably yelled back! One came up really close threatening but doing nothing. I told the soldier he should be intervening. I said “It is your job to protect this settler from me”! But he obviously didn’t think that the settler needed protecting and nor did I! I usually ignore settlers but was cheesed off about the flag and knew that I was safe. An officer I like was just up the road in his jeep. He had the door open and asked me what was the matter. I told him about the Israeli flag. He didn’t seem to think it mattered. He said that I was lucky with these soldiers because I caused trouble and others might not put up with that. I said that other soldiers might like me too. We decided to agree that we liked each other but didn’t like what each other did!

So today, when I came home, after tea and very nice slice with the doctor and his wife, I rang Neta of ISM to check about the law. I can’t do anything about the flag legally but did ring the DCOs office about. I don’t expect much because I think that the nice officer is from that office. The young women who answer the telephone there are always very nice to me. And I am always polite and thank them nicely. And sometimes I get the result I want! I also had my breakfast of cold fried egg in pita bread and heated up coffee. Then I started writing this. We have a new desk top computer, with internet, so I played a few games too.

At 12.30pm, Andy and I went out to watch children coming home from school. I accompanied two small Abu Aeshah boys up to the soldier, outside the Tel Rumeida settlement. The soldier wanted to watch me instead of the children. But I finally convinced him that I would go no further if he would watch the kids. There were settlers out, which scares the children, but there was no trouble. I pray that the day will come when they feel safe enough to walk rather than run the last stretch. I waited for Samir Abu Aeshah until 2.00pm but he must have been visiting today. Then Andy and I went down through the checkpoint to buy some food. I bought bread, bananas, tomatoes, dates, walnuts and sausage for the cat. By this time it was getting rather hot. So I came inside and Anna and BJ returned from the police station. 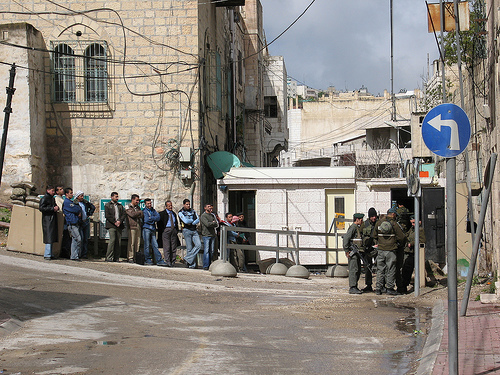 I had a call from a man from Al Jazeera wanting to talk to Anna about the attack. He was with a man from Reuters and they were held up at the checkpoint. I went there with Anna. On the way, a young Palestinian man said “You are needed at the checkpoint”! Border police were detaining all the men and checking their ID cards. This has become a daily event during the Passover holidays! I had thought that my being there made a difference and the newsman confirmed this. They could understand what the border police said to each other when I arrived. Nobody is held more than 15 minutes after I get there! But it may be an hour otherwise. So Anna came back with the newsmen and I stayed at the checkpoint for nearly 2 1/2 hours until the border police left. I had a call from a woman at Al Jazeera. She wanted to give me her email so I decided to be cheeky. I borrowed the pen that the border policeman was using to write down IDs. I think he was too bemused to object. Then home and a bit more typing.