Released by the Christian Peacemaker Teams 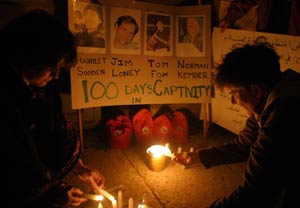 Our hearts are filled with joy today as we heard that Harmeet Singh Sooden, Jim Loney and Norman Kember have been safely released in Baghdad. Christian Peacemaker Teams rejoices with their families and friends at the expectation of their return to their loved ones and community. Together we have endured uncertainty, hope, fear, grief and now joy during the four months since they were abducted in Baghdad.

We rejoice in the return of Harmeet Sooden. He has been willing to put his life on the line to promote justice in Iraq and Palestine as a young man newly committed to active peacemaking.

We rejoice in the return of Jim Loney. He has cared for the marginalized and oppressed since childhood, and his gentle, passionate spirit has been an inspiration to people near and far.

We rejoice in the return of Norman Kember. He is a faithful man, an elder and mentor to many in his 50 years of peacemaking, a man prepared to pay the cost.

We remember with tears Tom Fox, whose body was found in Baghdad on March 9, 2006, after three months of captivity with his fellow peacemakers. We had longed for the day when all four men would be released together. Our gladness today is made bittersweet by the fact that Tom is not alive to join in the celebration. However, we are confident that his spirit is very much present in each reunion.

Harmeet, Jim and Norman and Tom were in Iraq to learn of the struggles facing the people in that country. They went, motivated by a passion for justice and peace to live out a nonviolent alternative in a nation wracked by armed conflict. They knew that their only protection was in the power of the love of God and of their Iraqi and international co-workers. We believe that the illegal occupation of Iraq by Multinational Forces is the root cause of the insecurity which led to this kidnapping and so much pain and suffering in Iraq. The occupation must end.

Today, in the face of this joyful news, our faith compels us to love our enemies even when they have committed acts which caused great hardship to our friends and sorrow to their families. In the spirit of the prophetic nonviolence that motivated Jim, Norman, Harmeet and Tom to go to Iraq, we refuse to yield to a spirit of vengeance. We give thanks for the compassionate God who granted our friends courage and who sustained their spirits over the past months. We pray for strength and courage for ourselves so that, together, we can continue the nonviolent struggle for justice and peace.

Throughout these difficult months, we have been heartened by messages of concern for our four colleagues from all over the world. We have been especially moved by the gracious outpouring of support from Muslim brothers and sisters in the Middle East, Europe, and North America. That support continues to come to us day after day. We pray that Christians throughout the world will, in the same spirit, call for justice and for respect for the human rights of the thousands of Iraqis who are being detained illegally by the U.S. and British forces occupying Iraq.

During these past months, we have tasted of the pain that has been the daily bread of hundreds of thousands of Iraqis. Why have our loved ones been taken? Where are they being held? Under what conditions? How are they? Will they be released? When?

With Tom’s death, we felt the grief of losing a beloved friend. Today, we rejoice in the release of our friends Harmeet, Jim and Norman. We continue to pray for a swift and joyful homecoming for the many Iraqis and internationals who long to be reunited with their families. We renew our commitment to work for an end to the war and the occupation of Iraq as a way to continue the witness of Tom Fox. We trust in God’s compassionate love to show us the way.

Living through the many emotions of this day, we remain committed to the words of Jim Loney, who wrote:

“With God’s abiding kindness, we will love even our enemies.
With the love of Christ, we will resist all evil.
With God’s unending faithfulness, we will work to build the beloved community.”