Conversations at the Palestinian “Outpost” 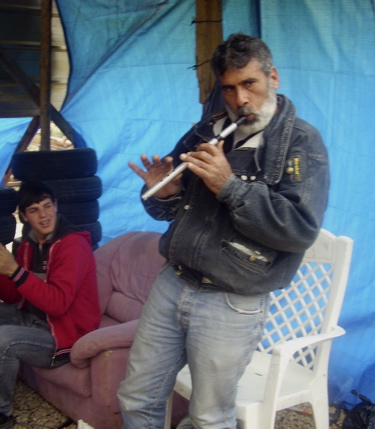 It’s been almost a year of the nonviolent struggle for the Bil’in residence against the illegal Israel wall. Beyond the wall, on land owned by the Bil’in community, the people of Bil’in have built a room referred to as the ‘outpost,’ adjacent to the illegal Israeli settlement outpost Matityahu Mizrah. The land on this side of the wall will be rendered inaccessible to the villagers by the annexation barrier.

Palestinians, Internationals and Israeli activists maintain a permanent presence in the outpost which has since been described as a place for shared popular resistance against the wall over Bil’in’s land.

When I was staying in the outpost, we (a friend, a boy from the village and I) walked through a gap in the fence created during one the protests against the wall. As we reached the other side of the wall an Israeli Hummer Jeep followed us through the field and stopped a few meters ahead. Three soldiers got out of the jeep and asked the boy, who was around 17 years old for his ID.
Boy: “I don’t have my ID”
Soldier: “where is your ID, why you don’t have it?”
Boy: “there is no need for my ID, why should I have it on me when I’m in my village?”
Soldier: “this is not your village, don’t play dumb and give me your ID”
Boy: “I left it at home and we are going to visit friends in that small house (the outpost)”
Soldier: “your land is back there, and that room is not for you”
Boy (pointing with his finger): “do you see that land over there? It belongs to my dad and it’s our land!”
Soldier (making a rude look): “stop the crap, next time you bring your ID with you” The soldier then looked at me and my friend and asked the boy for our IDs, I was very nervous because –legally- according to the Israeli policy I am not allowed to travel outside Tulkarem, where I come from. The soldier looked at my ID for more two minutes and then he let us go peacefully.

That night while we were sitting around a camp fire night at the outpost, another Hummer Jeep stopped by and three soldiers walked towards our tent. One of the local activists I admire and respect very much, a farmer called Waji , was there to have this conversation in Hebrew with the soldiers for more than twenty minutes.
The first soldier (apparently the commander): “Hello, how are you?”
Wagi: “We are good, but it would be better if you drop your weapon and join us to drink tea”
The commander: “Why you still sitting here?, we gave you your land back”
Wagi: “You did not give me anything, this is all the land of Bili’n”
The commander: “Your land is the village, this land is not for you it’s for the government”
Wagi: “ How come this land is for the government, did you buy it? Did you earn it some way”
The commander: “I don’t care, this land is for the government and how you want me to drop my weapon when all Arabs hate me?”
Wagi: “ You are stealing our land, our water, our trees, and demolishing our homes and lives, how you want us to feel towards you?” “
The commander: “Well, I have to protect my country and it’s my duty to join the army”
Wagi again: “OK! there is something mentioned in the Jews history, the golden age, do you know about it?”
The commander said: “No, then the next soldier smiled and answered, “Yes, I heard about the golden age”
Wagi: “Do you know what is it?”
The soldier replied, “yes, but you tell me about it.”
Wagi: “It’s the age when the Jews where living under the Muslim empire and you never felt the justice and took all your rights like that time, right”
The soldier answered: “Yes, it’s true.”
Wagi: “Is this how you treat us back now, why we can’t live like we were in the past?”
The soldier: “You have started it, you want to fight us”
Wagi: “It doesn’t make sense, If you gave me all my rights would I fight you? Why you are here with your gun then?”
The commander: “What about the suicide bombers, do you want me to let them blow them selves up in Tel Aviv?”
Wagi: “Do you think a 100 years old man would prefer to die? Naturally people love life. Why you think these people blow them selves up, why do they want to finish there lives”?
The commander: “They do this because they hate us.”
Wagi: “They do this because you have killed their friends, maybe their family or someone close, do you think throwing a bomb in Gaza the most over populated place in the world and killing women and children is different than the suicide bombing?”
The commander again: “Yes, this is a military operation done by soldiers but suicide bombing is different”
Wagi: “Let me tell you this personal story, I have a disabled son moving in a wheelchair, few months ago your army invaded my house and one of your soldiers aimed at my son while he was sitting and shot him in the shoulder”
The other soldier: “Only the border police do that, they are crazy!!! We are not like them, we are regular soldiers”
Wagi: “Regular soldiers!! Don’t you have this saying in the army “Shoot then Cry”? What makes you different?.”
The soldier smiled and didn’t say anything, Wagi added “Do you know how my son became disabled?, at the beginning of this Intifada he joined a peaceful demonstration against an illegal checkpoint in Ramallah and he was shot with a “dumdum” bullet by an Israeli sniper”
The same soldier again: “What is a ‘dumdum’ ?”
Waji with a smile: “You don’t know what is a “dumdum”? It’s an explosive bullet, it makes an explosion once it hits something. This illegal bullet shattered my son’s spine”
The soldier: “We don’t have these kind of bullets in Israeli, we don’t use them maybe it was a rubber bullet?”
Waji: “Do you think that bullet came from the sky and hit my son?, Do you know my son was dying and I wanted to take to Jordan to get better medical care but your authority did not give me a permit to save my son’s life! Let me tell you something else, what weapons do you use against peaceful demonstrations in Bil’in? Rubber bullets, coated steal bullets with salt, bean bullets (an illegal bullet splits into plastic pieces to poison the body, used once in the US and killed one woman”,) sponge bullets, the scream weapon, electric weapons. my other 12 years old son was shot with a “dumdum” bullet too in one of the demonstrations? Are you going to tell me that you don’t have these weapons too? My other son is in prison now for three months because he participated in peaceful protests against stealing his land. If you were in my place as a father, what would you do?!!”
The commander (nodding his head): “It’s been good talking to you, we have to go now. I hope we can see again and talk”
Waji: “If you come next time, come with your car without your uniform and you are welcome to visit me in my house”.