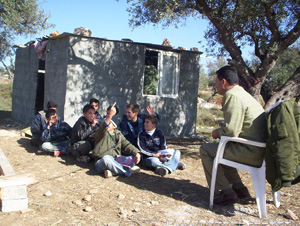 At 11:00 AM the Israeli military forcefully broke into, evacuated and removed by crane a trailer placed by the villages of Bil’in on their land cut off from their village by the wall. But, the villagers of Bil’in have expanded the “outpost” neighborhood of Bil’in west and built another structure that will serve as a school.

Today at 2:00 PM the village children will attend the first class to take place in the new structure.

The villagers have been provided with a permit from the Bil’in village council verifying that the land is legally owned by Bil’in residents and that the council approves the structures.

The trailer removed today was placed yesterday December 25th and replaced another trailer that was established and removed the same evening on Dec 23d. Both trailers served as “the center for joint struggle”. The evacuation procedure took place in stark contrast to
the treatment of massive settler apartment buildings, being built just hundreds of meters away. These buildings are illegal even according to the Israeli civil administration as most are built without a permit but the Israeli authorities chose to turn a blind eye and assist the
continued construction.

Bil’in residents have a pending Supreme Court case regarding the route of the barrier on their lands. Attorney Michael Sfard, representing Bil’in residents, has uncovered that the current route was designed to protect the investment of Israeli and Canadian real estate brokers who
claim to have bought the land from Bil’in residents. The Companies have failed to provide any proof of the transaction to the court and Bil’in residents deny that any land was sold.