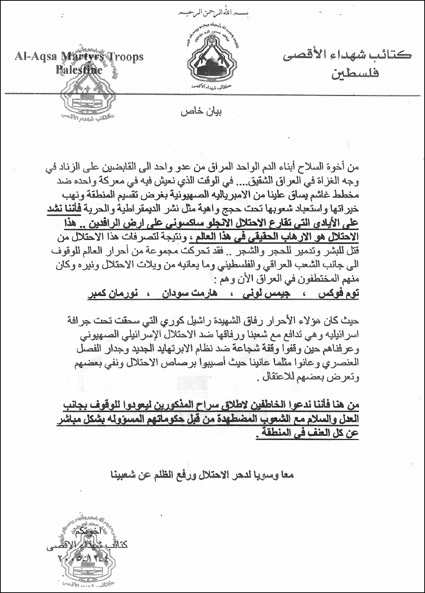 From your brothers in arms, the sons of the same blood who have suffered from one enemy, to the fighters against the invaders in Iraq, at a time when we are engaged in one battle against a single unjust plan by Zionist imperialism; a plan aimed at dividing the region, the theft of its wealth and the subduing of its peoples in the name of deceitful excuses such as the spreading of democracy and freedom, we appeal to the hands that are fighting the Anglo-Saxon invasion of the lands, those who reject occupation. This occupation is the real terrorism in this world. As a result of the actions of this occupation, be it the killing of humans, or destruction of houses and trees, a group of free people in the world have moved to stand by the Iraqi and Palestinian peoples, as they continue to suffer from the evils of the occupation. Those volunteers include: Tom Fox, James Loney, Harmeet Sooden, and Norman Kember.

Those are the same friends of the martyr Rachel Corrie who was crushed under an Israeli bulldozer as she stood in the defense of our people and her friends against the Israeli Zionist occupation. We came to know them as they took a courageous stance against the new system of apartheid and the racist separation Wall. They suffered as we did, and were wounded by the bullets of the occupation, while others were exiled and imprisoned

Therefore, we ask the kidnappers to release those hostages in order for them to go back and stand by the side of justice and peace, and by the side of the persecuted nations, notwithstanding the actions of their governments who are directly responsible for all the violence in the region.