Never Underestimate the Power of Women 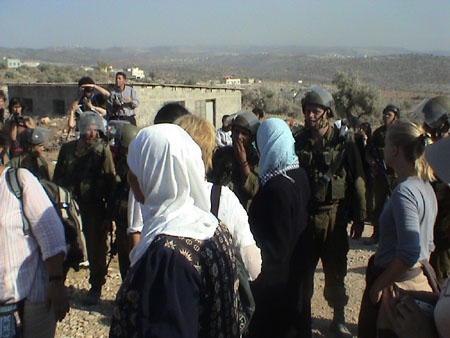 More than 450 international women arrived in Be’lin on Monday, August 16 to participate in an action against the Apartheid wall being built on the land of the village. Many of us came from the International Women in Black conference that was being held in Jerusalem, many came from other organizations in support of the demonstration.

But the most remarkable aspect of the event was to see over 100 Palestinian women join us. We walked down the dusty path to the heavily-armed soldiers standing behind their plastic shields, their riot gear and guns in stark contrast to our black shirts with the big purple flower on the front, the symbol for the conference.

The shocked look on their faces as 450 of us came up and over the last hill was recorded by dozens of video and still cameras. They simply didn’t know what to do with that much estrogen facing them. The soldiers tried to spread out to cover all the angles in front of a destroyed home, but they couldn’t stretch far enough, and more than a dozen Palestinian women got behind them, dancing and singing and clapping. 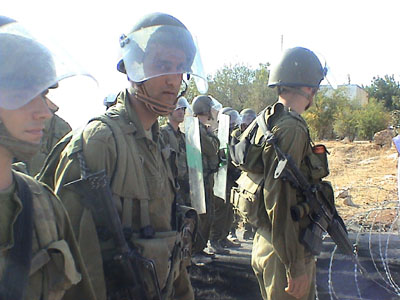 Many of us yelled at the soldiers, telling them we were ashamed of their behavior. One Jewish woman kept shouting, “I’m ashamed of you. I’m ashamed of what you are doing, and you’re not doing this in my name.” As we moved closer to them, trying to push back the barbed wire, the soldiers all got on their cell phones and pulled out a video camera. And there we were, many of us, photographing the soldiers photographing us.

Suddenly, the Palestinian women began to sing, as we clapped. Then we began the sing “We Shall Overcome” as they clapped. Back and forth in Arabic, English and Italian came the songs. Even if we didn’t know the words, we sang anyhow. For almost an hour, the demonstration was magic.

Then the Palestinian women pushed back through the soldiers and onto our side of them, one young woman shoving the soldier aside, then brushing herself off in disgust. The Palestinian organizers told us it was time to leave, and we began to straggle back up the hot, dusty road to the buses. Sure enough, just as the last of the women rounded the corner, the IOF began shooting tear gas at the Palestinian boys who had tagged along with us. But for that day, we peaceful women won that battle, looking into the faces of soldiers that were young enough to be our sons and grandsons.

They will never forget the force that came up over the hill at them.