A snake winds through Bil’in

Carrying a 20-foot long mock snake with a dove baring the colors of the Palestinian flag in its mouth, about 100 Palestinian peace activists in the West Bank village of Bil’in on Friday were joined by 50 Israelis and 30 internationals in a march toward the construction site of Israel’s illegal annexation wall. The display represented how is snaking through Palestinian land, killing the possibilities for peace.

While Israeli soldiers attempted to turn the situation into chaos with tear gas and sound grenades, peace activists were able to maintain two lines, with their arms locked, and walk toward the soldiers until they retreated back as television cameras from Aljzaeera and other news agencies recorded footage. Soldiers injured some protesters with shrapnel from sound grenades. Others were kicked or punched by soldiers. 13 Israeli activists were detained. Four people were arrested, two Israelis and two foreign peace activists.

Friday demonstrations in Bil’in’ begin at 1 p.m. on the dot. The Aug. 5 wall protest was no exception. As the demonstration neared the last house in the village, Israeli soldiers were prepared, standing with shields and riot gear behind razor wire. They immediately declared the area a closed military zone. Palestinians shouted back “This is Palestinian territory!” and continued chanting, singing and dancing for about half an hour. 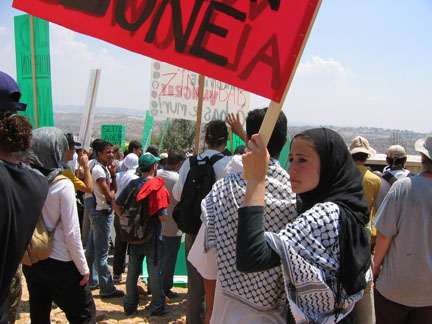 As some of the protestors continued chanting, the Israeli military started to move toward the demonstrators, firing tear gas and throwing sound grenades into the crowd. Israeli soldiers then pushed the demonstration back toward the village.

A peace activist from India was knocked down and kicked in the head. He said later that the soldiers had talked to him as though they thought he was a Palestinian. Another man — an actual Palestinian — was injured in his leg by shrapnel from one of the sound grenades tossed into the crowd by soldiers. Of the four arrested, the two internationals, one from Germany and the other from Denmark were released hours later. Two Israelis are still under arrest and accused of assault. One soldier has claimed that one of the Israeli peace activists “bit” him.

The demonstrators reformed into clear lines and linked arms and were beaten with shields by the Israeli military. Palestinians were specifically targeted with brutal force. Despite the large number of Israeli soldiers, the demonstration was able to eacefully stand its ground and move the soldiers back to the original stand-off point.