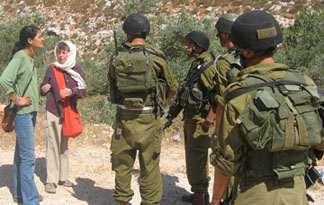 Over 250 villagers of Asira, Nablus district, gathered at 10AM this morning to begin the demonstration for free movement and against the military closures that have effected their community since the beginning of the Al-Aqsa Intifada.

Israeli Armed Personnel Vehicles, deployed since dawn, surrounded the villagers before they could take Sabaatash road, which leads to Nablus, and reach the roadblock. The army confiscated the accompanying village cars, ambulance and keys, cameras and film, and immediately blocked the entry to several local Arab and International journalists. An officer told Khannan Aljamen, a community leader, that the demonstration was illegal and that he would shoot straight to the head if anyone tried to continue on.

Without warning, a soldier shot a young man in the hip to prove his point. Medical volunteers have reported that the injury is not critical.

Khannan, with some knowledge of Hebrew, also overheard a soldier point out 2 other young men on top of a car. He said ” Make sure you hit them.”

Khannan placed himslef in front of the guns and yelled that they stop the shooting. The soldiers spat on him.

A high ranking officer reiterated, “I promise you, if anyone moves, we will put a bullet through his head!”

During this time, the Israeli army detained and arrested the 10 Israeli peace activists before they could reach the demonstrators. Nine internationals from Canada (including myself), Sweden, USA, and one Palestinian resident of Balata
refugee camp, were detained by soldiers at the Sabaatash roadblock as we headed towards Asira from Nablus to join the demonstration. They claimed that we were playing games with them and demanded to see our passports. They refused to allow us to pass under the pretext that it was a closed military zone.

The villagers were left alone to deal with the violent repression of their protest against the roadblock.

When Khannan asked the officer “why do you allow the settlers to freely move on these lands, and not the Palestinians? What about those sheep over there…are they allowed to move?” They officer replied, “I would like to keep it closed forever, you have no right to move. The sheep can move, they are animals.”

When the internationals finally arrived 2 hours later from another route, soldiers were still roaming among the trees in the surrounding hills. The Israeli acrtivists were released one hour after there detention and returned to Isreal.

Khannan informed us that army jeeps had entered the village the night before and shot gunfire in the air to intimidate the villgers – routine.

We stayed to speak to some villagers that were not attending the Friday prayer before returning to Nablus. The plans for the Thursday July 28th demonstration to open Nablus are now being worked out to ensure international and media presence.