Ethnic Cleansing is the name of Israel’s Policies 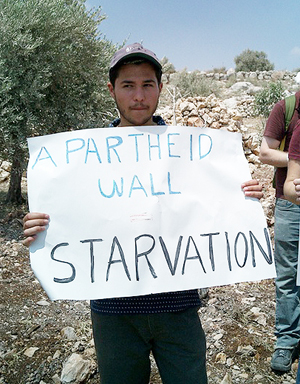 Just thought I’d drop a line to say I’m still well and alive. I am living in the occupied territories of Palestine, in the West Bank town of Tulkarem. I have been working with the International Solidarity Movement here, a Palestinian-led group of internationals from around the world who help the Palestinian people resist the occupation through non-violent means. The group is truly international with all sorts of countries represented.

The group is about 30% made of folks of Jewish decent, who like me, feel that this is a really outrageous injustice that is being done supposedly in our names.

We help organize demonstrations, and provide protection for the Palestinian people. Whereas the army would normally use live ammunition to stop a demonstration, they would think twice when internationals are present.

This all sounds wonderful in theory, but in reality, I’ve been stuck in crowds of rock-throwing kids, wondering if the Israelis would return live fire. Tear gas, sound grenades and rubber bullets have been tossed our way at demonstrations, although thus far no live fire thankfully. I’ve also seen quite a bit of crap here. The situation is really horrible – the Americans think that all the Palestinians are terrorists, when in reality on the ground they are simply defending their homeland against an occupying force. The real terrorists are the Israelis – the number of civilians that die here on a regular basis during ’peace talks’ is staggering.

The other day I visited a morgue and saw the results of Israeli terrorism. They shot a man in the legs with a half dozen bullets. Then at point blank, about four bullets were pumped into his head (gun directly to the head). The Israelis claimed he had a bomb near him, but if that was the case, why execute him? War crimes occur here on a daily basis – we have a flat for example right above a red crescent building that has been shelled by Israeli tanks (hospital bombing!) several times. The Israeli soldiers routinely use rubber-coated metal bullets to shoot at Palestinian kids’ eyes. The bullets pierce the eyes and enter the brains, killing the victim. This of course is in response to rocks being thrown at armored jeeps.

The reality on the ground is that these people are simply defending their homeland against an invasion. This is the same story as of any indigenous people — they are being driven out, slowly and patiently. This is ethnic cleansing, pure and simple. The Israeli policies are very similar to what occured in Africa during the Apartheid, and there are tons of laws that are purely racist. For example, if an Israeli marries a Palestinian, their children will not be considered Israeli citizens.

The other key sticky issue is the security fence, which when completed will leave to the Palestinian people 42% of the West Bank, but in reality when you consider the settlements (230 some of them in the west bank) the Palestinians will be left with about 8% of the west bank. All the water will be owned and controlled by the Israelis, and the fence DOES NOT follow the internationally recognized borders of Israel, but rather cuts miles and miles into the Palestinian land.

The Israeli state is a well-funded apartheid state. The people on the other side are left to resist with Kalashnikov rifles and explosives. They are caught between the Israeli terrorists and Arab states that do not ever want to see a democratic Palestine. It is a critical misunderstanding to think that this is about religion – it is about simply one group of people driving the other out. This is racism and ethnic cleansing, plain and simple.

The suffering on the ground is immense. I’ve seen a lof suffering here – far far far too much. I’ve seen the damage that a bomb from an American-funded F-16 fighter jet does to a building. I’ve seen the conditions within which these people live, the poverty, the destruction, the pain, the suffering. I’ve seen bullet-hole ridden walls in many of the cities here, left over from Israeli jeeps and tanks that ride around the cities and shoot indiscriminantly. I’ve watched a brother of a man killed by the Israelis break down and completely lose it after the death. I’ve negotiated with Israeli soldiers and prevented them from arresting the Palestinians, physically using my own body as a shield to prevent them from getting to Palestinians.

Suicide bombings are not about religion. They are about people who have no hope in life, who are driven by the suffering, the pain to use their own bodies to call attention to their cause. They do not have rockets, they have no tanks, no gunships, no helicopters, no armored jeeps. They have their own bodies and home-made explosives. And under international law they have the right to resist the occupation through military means. I do not feel it is my place to condemn them choosing to resist by all means necessary, although I really do not feel that the violence will solve this conflict.

To talk of terrorism, I think it is also essential to point out that far more civilians die in car accidents in Israel each year than are killed by suicide bombers. It is also critical to point out that the casualty count on the Palestinian side is far heavier. Almost every Palestinian male has been through the Israeli jail at least once, usually for about 6 months administrative detention, and most have no clue whatsoever what crime they were guilty of (sound familiar? Think Guatanomo Bay for the Afghanistan war victims). The Israeli army routinely and regularly maims and murders civilians, usually with no reason whatsoever.

There is a real ladder here of value of life – at the bottom are the Palestinian men, then Palestinian women, then Israeli Sephardic Jews, Israeli Ashkenazi Jews, and somewhere near the top are the internationals – killing them is really bad PR. Israel is a racist state – plain and simple, there is nothing more to it.

The Israelis have done everything possible to kill the economy here (80-90% level of unemployment) through a number of actions (such as simply digging up the main streets of towns to kill off the shops by cutting the traffic through the area). Travel is impossible – a trip that used to take 10 minutes, now takes 3 hours to a full day due the roadblocks everywhere (mounds of dirt across major roads) and checkpoints. The other day coming from Jerusalem, a trip that normally takes 1.5 hours took 5 as my bus was pulled over by 18 year old boy soldiers who they decided to harass a bunch of Palestinian men.