in Email Blast, Features, In the Media, Press Releases April 7, 2020

Recently, the Intercept published a report of a surveillance investigation conducted by the FBI on the International Solidarity Movement (ISM). The highly invasive investigation targeted ISM activists, their associates, and other organizations ISM worked with, from 2004 – 2006, using informants as well as physical and telecommunications surveillance.

We, at the International Solidarity Movement, denounce this shameless abuse of power and misuse of public funds in an attempt to criminalize Palestinian solidarity and anti-occupation activism, as well as the current ongoing campaign in some American states to criminalize the BDS movement. ISM activists have been secretly spied on and targeted by various intelligence services, including British, Israeli, and U.S.,  for over 19 years, merely for standing up for the rights of Palestinians.

We call on those who believe that Palestinians are entitled to the same rights as the rest of humanity to take action and raise awareness about local, state, and national attempts to criminalize nonviolent resistance such as BDS and Palestinian advocacy, and boycott those profiting off the Occupation of Palestine. 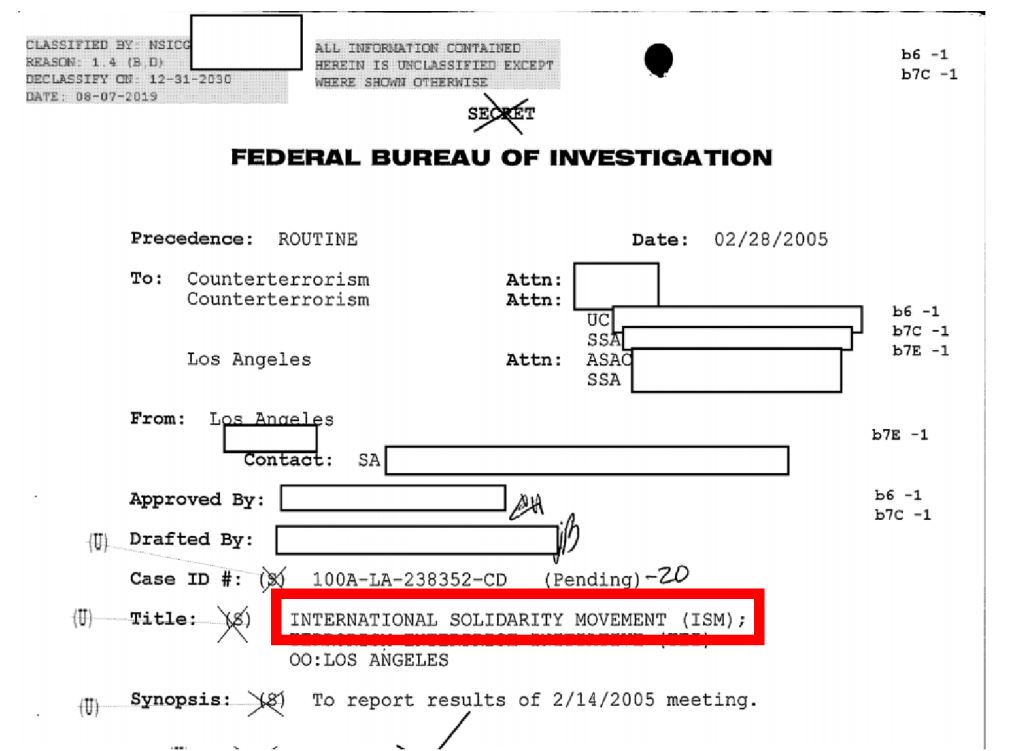 One of the many FBI surveillance reports on ISM.

According to the Intercept report, an FBI investigation was launched after an American volunteer with ISM was shot and wounded by Israeli forces at a protest in Occupied Palestine. Instead of investigating the foreign army that injured an American citizen exercising his First Amendment-protected right to peaceful protest, the FBI’s response was to probe the survivor. While the 2 primary investigations were launched by the Los Angeles and St. Louis FBI Field Offices, agents from at least 11 cities were involved in spying on various ISM activists and related organizations. Using far right and extremist news sources, the investigation attempted to link ISM to international terrorism.

After two years of investigation, multiple rights and privacy violations, hundreds of pages of reports and tens of thousands of taxpayer dollars wasted, the investigation only proved what we have always maintained: ISM is a non-violent movement committed to ending the Occupation of Palestine through non-violent means.

Notably, the investigation began in March 2004, shortly after the murder of American Rachel Corrie and Briton Tom Hurndall (2003) by the Israeli army. The probe coincided with an Israeli government campaign to de-legitimize ISM and discredit Palestinian rights activists. It also reflects the increase in recent years of FBI investigations into non-violent activist organizations such as Black Lives Matter and Antiwar.com. Today, lobby groups, politicians, and leaders in the United States continue to violate First Amendment-protected rights to free speech through criminalizing non-violent Palestinian activism, such as the Boycott, Divestment, Sanctions (BDS) movement.

“The fact that ISM was under this kind of extensive investigation is ridiculous and a complete waste of taxpayer money. ISM has always been open and transparent about who we are, what we do, and what we stand for, which is purportedly what this country stands for — freedom and human rights.” — ISM co-founder Huwaida Arraf

“In Dr. King’s time, surveillance was justified in terms of alleged Communist influence; in recent years, surveillance has been justified by alleged association with terrorists. In both cases, U.S. citizens were employing nonviolent action to confront injustice and oppression.” — ISM activist spied on by the FBI, Mark Chmiel