New
Home / Features / Amazon, Israel, and the Occupation of Palestine

On September 22nd, Amazon quietly launched its operations in Israel, offering local delivery from a number of Israeli brands, with a Hebrew-language version of its Israel platform coming soon. Consumers in Israel now have faster and broader access to the world’s largest e-commerce marketplace, yet questions remained unanswered about Amazon’s ties with Israeli military, financial, and technology companies involved in the Occupation of Palestine as well as  accusations of anti-Palestinian bias against the platform and its founder Jeff Bezos.

Though Amazon Israel was launched barely two weeks ago, Amazon’s business operations with Israel go back much further. As early as 2015, Israel Aerospace Industries (IAI) began servicing Amazon’s fleet of cargo planes, and now services 80% of Amazon’s aircraft. IAI is a wholly Israeli state owned aerospace and weapons manufacturer which supplies the Israeli army with aircraft, drones, missiles, armored vehicles, spy satellites and more. Its weapons have been used in assassinations and military invasions of Gaza. In the 1970s, IAI sold weapons to the Shah of Iran, and more recently, a UN report in August this year found IAI had sold weapons to Myanmar’s military after it began its genocide and ethnic cleansing of the Rohingya minority. IAI subsidiary Elta North America was recently commissioned to build a prototype of Donald Trump’s wall on the US-Mexico border. Amazon also works with Israeli technology firm NSLComm, which receives funding from the Israeli government, and builds network satellites “that will be used for… military applications”, according to Haaretz. 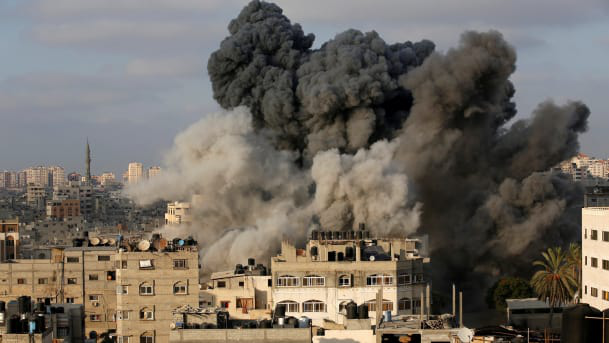 While Amazon’s ties with IAI and NSLComm are rarely reported in the media, its multi-million dollar contracts with another security firm has attracted widespread condemnation and protest. Amazon makes millions off providing web servers and database storage for Palantir, a private US data analysis firm which aids Immigration and Customs Enforcement (ICE) in identifying and deporting migrants. A petition this summer for Amazon to cut ties with Palantir and ICE gained over 270,000 signatures. Palantir also provides the Israeli government with so-called “predictive systems”, which analyze social media posts to identify Palestinians deemed a “threat”. The result of Palantir’s racially profiled analytics systems is that Palestinians are arrested and face long prison sentences for simply posting photos of family members killed by Israeli forces or in prison, citing Quranic verses, or calling for protests.

In the financial sector, Amazon signed agreements this year with Bank Hapoalim and Bank Leumi, two major Israeli banking institutions, to provide discounts to Amazon customers using Leumi and Hapoalim bank accounts. A 2018 report by Human Rights Watch found both banks guilty of financing construction and expansion of illegal settlements in the West Bank, while Bank Leumi also funds academic institutions in illegal settlements and programs for IDF recruits, even sponsoring gift packages and additional vacation days for Israeli soldiers during the 2014 invasion of Gaza, in which over 2,200 Palestinians, including more than 550 children, were killed. Pension funds and banks in Norway, Denmark, the Netherlands, and the UK have divested from Bank Leumi and Hapoalim due to their human rights violations, while Amazon signs new cooperation agreements with them.

Amazon’s dealings with Israeli companies supporting and profiting from the Occupation aside, many more questions remain. The most troubling of these questions surround t  how Amazon Israel will deal with realities on the ground in its operations. Will Amazon deliver to customers in illegal settlements? Will Amazon sell products manufactured or grown on Palestinian land seized by armed settlers and considered illegal by the UN and the international community? Will Amazon give Palestinian and Israeli sellers equal access to its platform?

A quick look at Amazon’s policies on its global site, amazon.com, give some indication as to how it might run its Israeli site. Last year, Amazon removed a top-selling T-shirt that reads “Make Israel Palestine Again”, on the grounds that it did not fulfill Amazon’s content policy. Amazon’s content policy prohibits the sale of “products that promote or glorify hatred, violence, racial, sexual, or religious intolerance or promote organizations with such views.” Amazon seems to have no problem, however, with selling “IDF” merchandise; at the time of writing this article, IDF T shirts, dresses, Halloween costumes, and even baby clothes were available on its global site. The occupation army has been accused of racism, sexism, religious intolerance, and countless acts of violence, torture, and human rights violations, not only by Palestinians but also by Israeli soldiers. 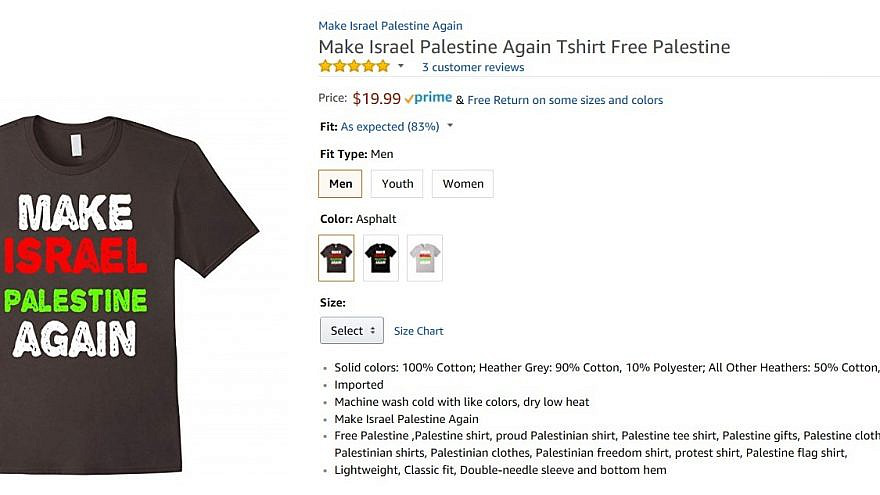 A screenshot of the “Make Israel Palestine Again” T-shirt removed by Amazon.

Amazon president, CEO, and largest shareholder Jeff Bezos, the richest man in the world since 2017 (and according to Forbes, the richest man in history) has yet to speak publicly about Palestine or Israel; he rarely gives public comments on any political issues. But indications of the Amazon founder’s political stances can be seen in the Washington Post. Jeff Bezos purchased the US paper for $250 million USD and has been its sole owner since October 2013.

The Washington Post has published a wide range of articles on Israel and Palestine, and a quick look at their articles and editorials since Bezo’s takeover in October 2013 shows where its editorial staff and leadership stand. It describes the shooting of unarmed Palestinian protesters in Gaza by Israeli snipers as “clashes”, and Netanyahu as a “prudent, even cautious, statesman” who “quietly restrained the building of Jewish settlements”, even though during his last 10 years in office over 20,000 settlement units were built in the Occupied West Bank. One Washington Post article, titled “Palestinians Kill 3 Israelis as Violence Mounts in ‘Day of Rage’”, acknowledges only in the 6th paragraph that “28 Palestinians have been killed by Israelis.” Israelis are routinely described as “killed”, but Palestinians merely “die”. Another article on electricity cuts in Gaza makes sure to inform the readers in the headline that “it’s not all Israel’s fault”. Last year, the Washington Post ran a full page advert calling New Zealand artist Lorde a “bigot” for canceling a concert in Israel.

From the Washington Post (of which Amazon founder Jeff Bezos is the sole owner) on May 6, 2019. Israelis are killed, but Palestinians just “die”.

Jennifer Rubin, a journalist for the Washington post, once retweeted an article describing Palestinians as “death-worshiping, innocent-butchering, child-sacrificing savages”, “devils spawn”, and “unmanned animals” who should be thrown “into the sea, to float there, food for sharks”. Her writing in the Washington Post declared that endorsements of the one-state solution “amount to calls for genocide”, and called then–Secretary of State John Kerry “intentionally obtuse”–or a liar–for not denouncing the Palestinian right of return. The Washington Post has rejected calls to remove Rubin for promoting racism and Islamophobia.

Given Amazon’s record of involvement with corporations deeply entrenched in the Israeli Occupation of Palestine, there is a high possibility of Amazon Israel failing to comply with international and human rights law in its Israeli operations. Should it fail to respect international law and engage in operations directly normalizing, supporting, and profiting from violations of Palestinian rights, Amazon may face boycott calls similar to those taken by BDS against companies like HSBC, SodaStream, Airbnb, Caterpillar, and Hewlett Packard. It remains to be seen what kind of corporate values Amazon Israel will deliver.