As part of a targeted collective punishment towards the village of Beit Kahel following the death of an Israeli settler in Gush Etzion, ten individuals from the village have been arrested by Israeli Occupation Forces.

Seven of the detainees are all part of the Asfara family, and include brothers Ikriah and Naseer Asfara (28 and 23 years old), their brother, their cousin Qassam Asfara (30 years old), his two brothers, and his wife Dnas Nabeel Asfara (27 years old). Qassam – who has a permit to work in Israel which requires a background check for security clearance – and Dnas have two very young children, of just 3 and 5 years old. The children have now been without their parents since they were arrested during preparations for Eid Al-Adha, on Saturday 10th August 2019.

The Israeli military have announced that Ikriah, a journalist, is not under suspicion in relation to the death, but they have not released him. Relatives of the detainees have heard nothing since the arrests, except that they have been taken to an Israeli prison north of Gaza. Their lawyers have been unable to have any dialogue with Israeli authorities about the individuals or the case; the only news that family members have had has come from Israeli media about the incident. The Asfara family are very concerned for the arrested individuals, as Israeli prisons are well known to employ torture methods in an attempt to coax ‘admissions’ from accused parties. All of these torture methods are made legal under the title of “Moderate physical pressure,” and include: solitary confinement in high temperatures; being forced to stay awake for days or weeks on end; starvation; and enduring incredibly loud sounds and music 24 hours a day.

Prior to the arrest, members of the Asfara family, and other residents of the village of Beit Kahel had been subject to daily harassment by the Israeli military, and when they came on the Saturday 10th before Eid Al-Adha at 2am, 30 soldiers broke into and terrorised two buildings they raided as they carried out the arrests. 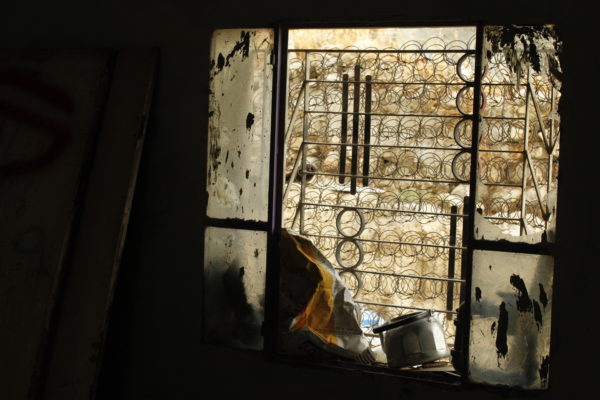 Mr. Asafra, the uncle of those arrested, described:

“We were sleeping peacefully in our homes, they (IOF) broke in and started beating everybody up. It was the Saturday before Eid at 2am while everyone was asleep. They stayed until 8am. 6 continuous hours of beating people up in the house. They horrified everyone and beat two men and arrested 4 people. They horrified everyone. They took every family member into one room and then searched the house.”

The brothers, Naseer and Ikriah, were sleeping on the roof of the other home raided, and they were woken up by security dogs. Israeli military broke in and raided both houses. 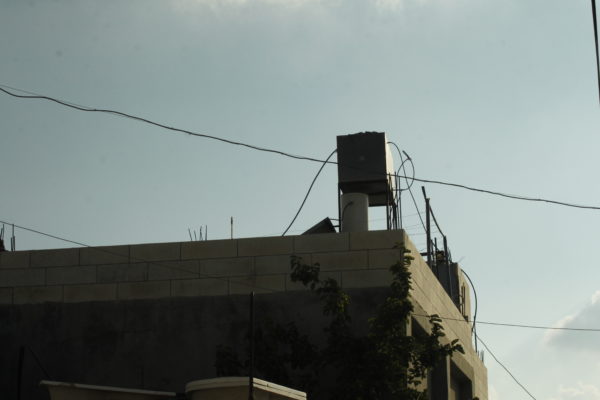 The rooftop of Naseer and Ikriah’s home.

“It was terrifying for the children sleeping inside,” said Mr. Asfara, “They and the women were screaming.”

The three men arrested, along with other family members, were beaten badly in front of the rest of the family. Dnas was not beaten, but roughly handcuffed and taken by the soldiers, who did not let her get dressed or put her head scarf on. She quickly grabbed her praying overcoat to protect her modesty as she was dragged out of her home.

Mr. Asfara states: “I never expected a country with an organised “democratic” structure would behave this way towards civilians.” 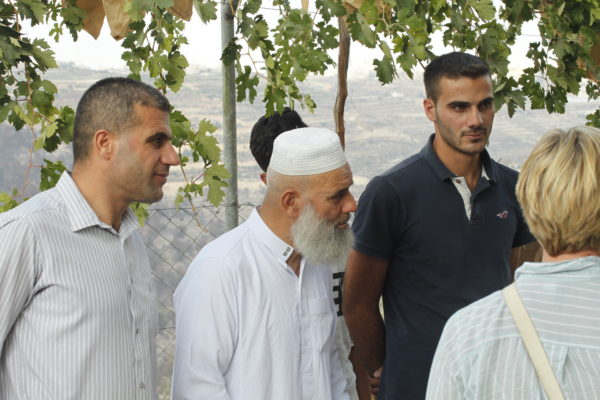 Mr. Asfara, the uncle of the detainees.

The IOF returned the next day on Sunday 11th, during Eid Al-Adha celebrations, at around the same time of 2am. Again, they entered the village with incredible violence, raided both homes, confiscated Qassam’s car, and horrified the residents. They searched both buildings for 2.5 hours before taking photographs and sketches of the properties, measuring them up for demolition, despite having no demolition order from the court.

When the IOF came to the Beit Kahel for a third time, on Thursday 15th August, residents of Beit Kahel had organised a sit in of Naseer and Ikriah’s home. As 200 people were gathered inside and on the roof of the property, the Israeli military barricaded the village and fired tear gas into the building and then surrounded it, blocking any Palestinian from leaving as the house filled with the gas. Many were affected very badly by the tear gas; considered a chemical weapon when used in War, but somehow legal in civilian cases despite the high mortality rate of Palestinians due to tear gas related casualties.

The family has not received any demolition order at all, so the village hope to resist the actions of the Israeli military until they get confirmation from the high court that the houses will be demolished for certain. 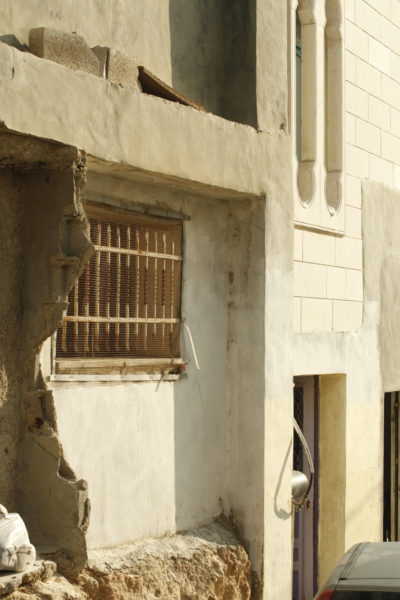 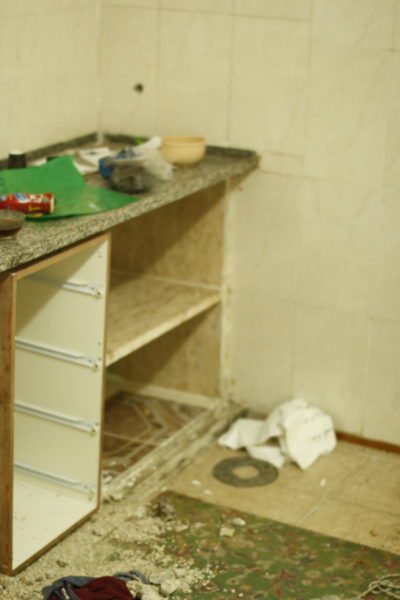 Naseer and Ikriah Asfara reside in only 2 of the 4 apartments in the building, yet the Israeli military took measurements, sketches and photographs of all 4 apartments, as well as a separate building where Qassam lives with his wife Dnas. The residents of Beit Kahel are appealing the demolition in court, hopefully to freeze it, but even if they win the appeal not to demolish all 4 apartments in the building, the military could block the 2 houses of the accused, or fill them with cement.

Housing demolitions, most often without a court ruling, are a common collective punitive measure by Israel, under the 1945 British Mandate emergency law. This policy has its origins after end of the First World War and the dismantling of the Ottoman Empire, when Great Britain seized much of the Middle East, and gave wide authority for local military commanders to confiscate and destroy “any house, structure or land… the inhabitants of which he is satisfied have committed… any offence against these Regulations involving violence.” Despite the outdated and irrelevant nature of this policy, it was renewed by Israel in 2014, granting the occupying forces legality to demolish the homes of Palestinians under any accusation, founded or not. 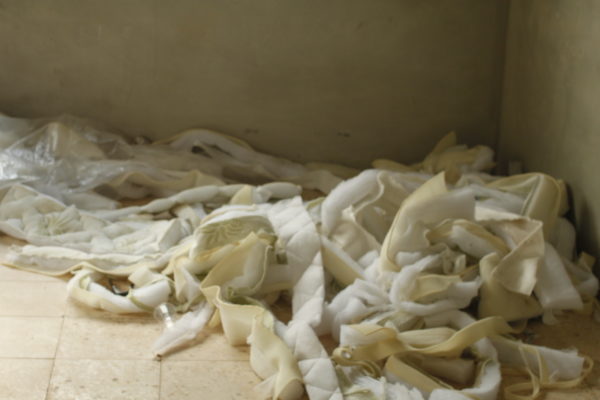 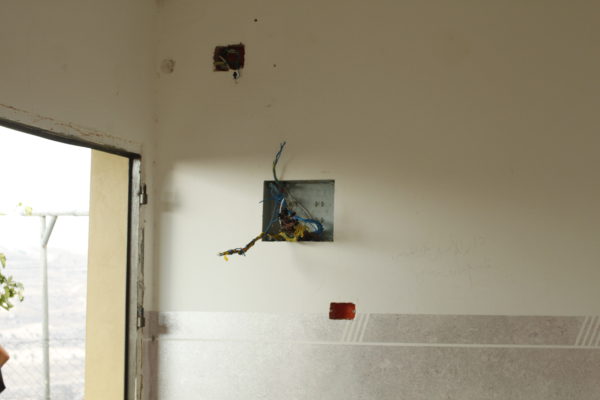 As a further punitive measure, 9 members of the family have had their Israeli work permits blocked, so in addition to their being unable to earn a living, they are also unable to pass through checkpoints. Qassam’s 57 year old father Aref has also been returned from checkpoints, unable to pass through the country. This renders the entire Asfara family without their livelihood, trapped in Beit Kahel, soon to be made homeless.

Since these initial arrests, the IOF have returned to Beit Kahel and arrested 6 more residents of the small village. Two of Qassam’s brothers, a brother of Ikriah and Naseer, and three others were arrested in a night raid on Monday August 19th.

Following these events, Israeli Occupation Forces have had an almost constant presence in the village, threatening: “We will come at any time we want, don’t think this is over.” 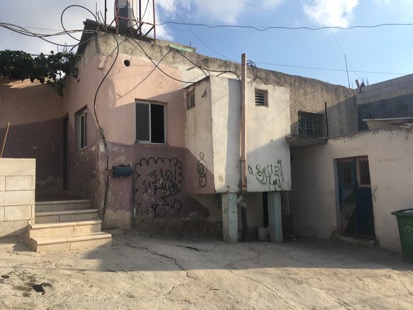 “Welcome Everyone” in Arabic on the connected apartment to the residence of the accused brothers.