Once again, Palestinians exercised their right of free speech under international law, and once again, were encountered with tear gas and gunfire. Outside Nablus, demonstrations took place against the continuous construction of Israeli settlements and outposts, imprisonment of Palestinians- young and old- and the Trump administration’s declaration to move the US embassy in Israel to Jerusalem. At one point, when the Israeli assault settled, an activist was able to comment on the situation: “We refuse any attempts to make Al Quds a capital of this zionist state, which aims to divide our lands with the ‘Big Jerusalem Project’ or ‘E1 Plan,’ that will be used to connect Ma’aleh Adomim Settlement with Al Quds, through the Palestinian lands and towns, furthering the separation of our land into small cantons.” Constant infringement on rights, humiliation, and collective punishment of Palestinians are at the core of this dreadful conflict, and have been the fuel for non-stop protests throughout the occupied West Bank for years. The most recent example of this systematic cruelty is Isra’a Al-Ja’abis, whose been in prison for 2.5 years, reportedly having been denied proper medical treatment for her severe burns that she got after her car exploded in 2015. 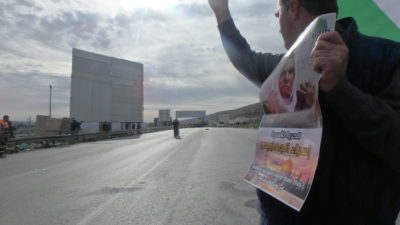 For every lull in violence by the police, came another eruption of tear gas and firing, pushing the protestors back by hundreds of meters. Both Internationals showing solidarity, and the press, avoided rubber-coated steel bullets, tear gas, and stun grenades. One Palestinian was injured by a live sniper-bullet, reportedly to have been bleeding profusely from his leg. “He’s been taken to the hospital for treatment, and we don’t have updates on his condition.” 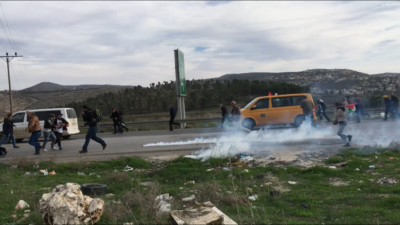