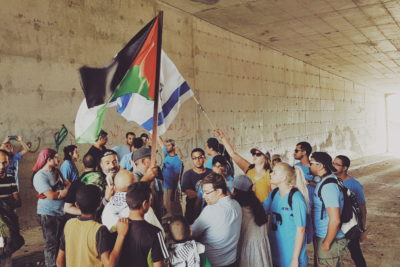 After an Israeli court ruling on September 5 2018 confirmed the eviction and demolition of the Palestinian Bedouin village of Khan al-Ahmar, residents of the village, Palestinians from across the West Bank and international activists have gathered each day in solidarity at the village, awaiting the arrival of the Israeli forces.

On the morning of September 7, 2018, around 09:40, as approximately 40 Palestinians and internationals were peacefully enjoying morning tea and coffee, a busload of an estimated 40-50 people from the Israeli zionist hate-group “Im Tirtzu” pulled off the highway by the village and approached. The Palestinians and internationals who were gathered at Khan al-Ahmar met the Israeli hate group at the entrance of the village before they entered it. The Palestinians questioned the purpose of the group’s presence were met with verbal insults and accusations of anti-semitism. 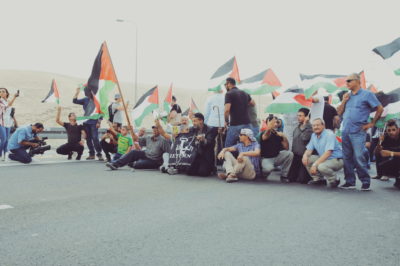 The non-violent presence of the Palestinians and international solidarity activists put pressure on “Im Tirtzu” to retreat back to the highway. Israeli forces; police, military, and border police, met the groups by the highway and proceeded to don their full riot gear. As “I’m Tirtzu” awaited their bus for pick up, the police demanded that the Palestinians and internationals return to Khan Al-Ahmar, even physically pushing several individuals. Police also forcefully grabbed the Palestinian flags in a show of unnecessary aggression as people were retreating. 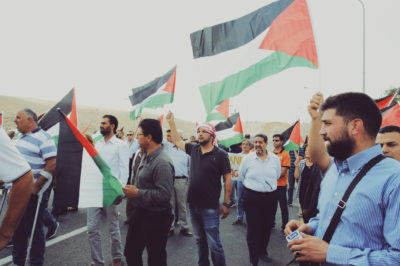 By September 7 at 13:00, between 400-500 Palestinian solidarity activists, official Palestinian activist groups, government officials, media personnel, and international activists gathered under the tent at Khan Al-Ahmar for a prayer service. Following the prayer service, the group migrated to the highway, referred to as Route 1, to occupy the street in a peaceful demonstration of their resistance to the threatened eviction. Dozens of Palestinian flags waved in the breeze as demonstrators blocked highway traffic, chanting songs of resistance in Arabic. Fully armed police and military officers forced demonstrators off the street under threat of physical violence. The demonstrators moved but continued the protest for another 45 minutes by the side of the highway. 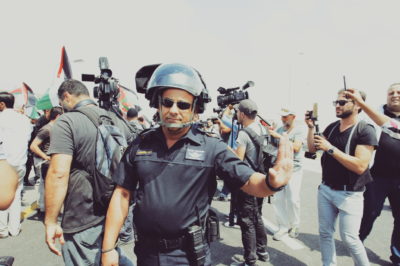 Palestinian and international solidarity activists will maintain a presence over the coming week in the village of Khan Al-Ahman alongside the village’s residents, who are all anxiously awaiting the arrival of the Israeli army set to carry out their eviction plans. 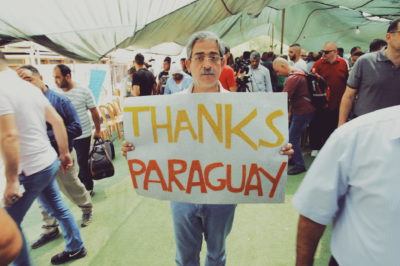