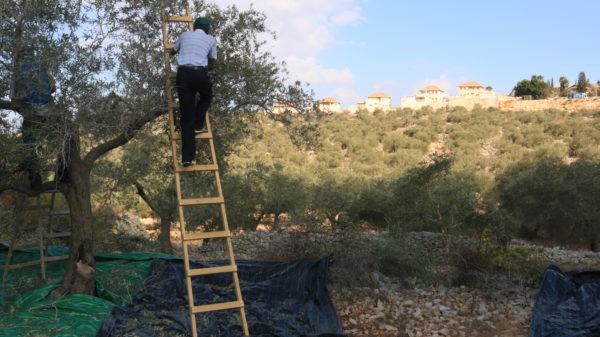 Tthe International Solidarity Movement (ISM) is issuing an urgent call for volunteers to join us for the 2018 Olive Harvest Campaign at the invitation of Palestinian communities.

The olive tree is a national symbol for Palestinians. As thousands of olive trees have been bulldozed, uprooted and burned by Israeli settlers and the military —over half a million olive and fruit trees have been destroyed since September 2000—harvesting has become more than a source of livelihood; it has become a form of resistance.

We support Palestinians’ assertion of their right to earn their livelihoods and be present on their lands. International solidarity activists engage in non-violent intervention and documentation:practical support which enables many families to pick their olives.

The harvest will begin in early-October and run until mid-November.  We request a minimum two-week commitment from volunteers but stress that long-termers are needed as well.  We kindly ask volunteers to start arriving in the first week of October, so team are trained and well prepared when the harvest begins.

Other ways to help: Donate

For those who can’t make it on this period and want to help they can donate or help in fundraising money.

In addition to the olive harvest, there will be opportunities to participate in others kinds of grass-roots, non-violent resistance in Palestine.

ISM maintains a constant presence in Hebron (Al-Khalil), where settler harassment and violence is a regular occurrence. Lately, Israeli army violence has escalated for Palestinians living close to the illegal inner-city settlement. Israeli forces use Palestinian neighborhoods for military training, and heavily repress any form of resistance, responding with collective punishment as they lob dozens of teargas canisters and stun grenades onto Hebron’s population: even schoolchildren. With harassment, humiliation and violence a daily occurrence, ISM is present to document these extremely violent responses, and to serve as a protective presence by joining children and teachers going to school and make sure they return safely (school runs).

Amongst other places, ISM practices documentation and presence in the Jordan Valley, Umm Al-Kheir (South Hebron Hills) and Khan Al-Ahmar to stand up against cleansing.

In addition to these activities, we participate in the weekly demonstrations in different regions in the West Bank, for example in Bel’in and Kafr Qadum where our presence is requested, protesters face excessive force by the Israeli Occupation Forces (IOF) and are threatened with house demolition orders, all adding up to ethnic cleansing.
Other regions where ISM is asked to participate against the Occupying power’s violations of Human Rights and other International Laws is in Occupied East-Jerusalem and areas in 48.