New
Home / Features / A statement from the Norwegian ISM volunteer targeted and shot by an Israeli soldier in Kafr Qaddum, video included

A statement from the Norwegian ISM volunteer targeted and shot by an Israeli soldier in Kafr Qaddum, video included

A description of the events of Saturday, 18th of August, from the Norwegian ISM volunteer targeted and shot by a soldier in Kafr Qaddum

I, Kristin Foss (43) work as a volunteer for ISM (International Solidarity Movement). ISM is a non-violent, Palestinian lead organisation that responds to requests for assistance from Palestinians, who for various reason need international witnesses and/or protection. This can be for demonstrators, when houses get broken into by soliders or colonialist settlers on a daily/nightly bases, children needing to be walked to school as a result of being harassed by colonialist settlers, that they have been told their house or village is about to be demolished, that their access to water has been closed or broken etc.

I am fully aware that this job carries risk and that I will be exposed to dangerous situations, but this does not release Israel from their responsibilities with regards to international law. Israel portrays itself as a democratic state, with “The world`s most moral army”—as such, the minimum that could be expected from them, is that they adhere to international law.

On Saturday, 18.08, an Icelandic colleague, Anna, and I travelled to Kafr Qaddum, a village close to Nablus, West Bank. The inhabitants had asked for our presence due to violence from Israeli soldiers every Friday and Saturday.

The main road to Kafar Qaddum was closed for inhabitants, by Israeli soliders 7 years ago. The road was built and kept by the ethnic population to the region, throughout generations. Today the road is only open to Israeli colonizers, in the illegal settlements.

The local population of Kafr Qaddum now has to drive 14 km, instead of a couple, to arrive to Nablus, where many of the inhabitants study and work. The inhabitants have been protesting the closure of the road every Friday for 7 years—now also on Saturdays. Pre- or during demonstrations the village is invaded by soldiers who fire live ammunition, rubber coated steel bullets and tear gas at demonstrators. They have also sprayed skunk water (raw sewage) into the houses of inhabitants. Several inhabitants have been shot with live ammunition, including children and elderly. The inhabitants do not have any weapons themselves (!)—they want to be able to demonstrate in peace, and they want their road to be open for them to use.

When we arrived Saturday, there were already clashes. Soldiers were present at 2 points in the village. From both points they were shooting with rubber coated bullets, at a group of mostly very young boys, who were throwing rocks back at them. Anna and I were present at one of the points, observing and making sure our presence was known to the soliders.

The shooting was going for about one and a half hour, before it started to calm down. Apart from some tear gas inhalation there had been no injuries at this point.

When things were calm, I was approached by a senior citizen, asking if we could please help him. He had gone out to his drive way earlier as he was going to get in his car to pick up his wife. He did not notice that his drive way was full of soliders. The soldiers stole/confiscated his car and the keys, and parked it in the middle out the road as an economical shield. As it was calm, we agreed to accompany him to speak to the soliders and to ask for his car back.  There was no shooting, nor stones being thrown at this point. Him, Anna and I started walking towards the soldiers, with our hands in the air. I had my camera phone in one hand. The man walked surprisingly fast and was soon with the soldiers, whilst Anna and I stopped some 20 metres behind, still with our hands up. I am filming at this point.

One of the soliders shouts something at me in Hebrew, I don’t understand, but I shout back  that the man just wants his car back. Then he shouts that it is dangerous. I shout back that it is only dangerous because he is pointing a machine gun at me. Those far behind me posed no danger to the soldier, nor to me. One shot is fired as I am shouting, then another shot is directed at me, and hits me in the abdomen. I would say from approximately 20-30 metres. It is absolutely no doubt I was targeted and shot deliberately. 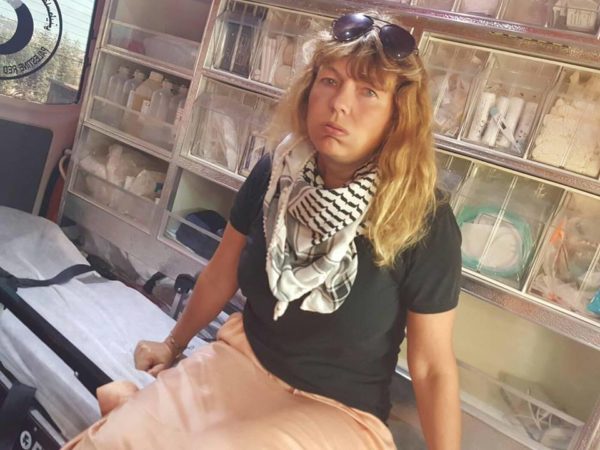 Being treated in the ambulence

It was extremely painful and I was in a state of shock, but quickly managed to withdraw to behind a brick wall. I was then helped by Palestinians who led me to the nearby Red Crescent ambulance. I received immediate treatment to my wound, the bullet had pierced some skin, so there was some blood, a massive bump and I was already black and blue. The ambulance staff was incredibly professional and calm.

After 5 minutes or so I wanted to go back to confront the person who had shot me—from a safe distance. I was angry about being shot, whilst unarmed, after having declared our mission—and whilst posing absolutely no threat. However, Anna then had to retire to the ambulance as she was suffering badly from teargas inhalation.  We did join the protest a bit after this, but then decided to retire to the back as I felt very vulnerable and I was scared they would shoot me again.

I would like to add, that I know I am, and was, very lucky. I am Norwegian and have be shielded from this kind of violence my whole life. I do not have to be here and I can choose to go home at any given moment. This incident however, has only strengthen my resolve to keep fighting, in solidarity, with the Palestinians —who unlike me have no choice. Thousands of Palestinians have been shot this year alone. By rubber coated steel bullets and by live ammunition. Palestinians get shot for the crime of demonstrating for their basic human rights—or simply for the ‘crime of being born Palestinian’. Whilst my case have been blown up in media, theirs go unnoticed.

It is an unnerving feeling, the knowledge that a stranger has aimed his gun at me, perhaps discussed shooting me with his colleagues —and then made the choice to shoot me. That someone wanted to inflict pain on me, without knowing anything about me —to shoot me in the knowledge that it has no repercussions for themselves. Palestinians have to live with this everyday. The knowledge that at any moment an Israeli sniper might have them in their scope—and will shoot to kill or maim. Shoot them, shoot their kids, their parents, their friend, their loved ones. Violence. Because I am Norwegian, I can and will use my story to highlight what is happening here in the Norwegian media. But I do not, not even for one second, forget that what happened to me, is only a small taste, a minuscule taste of what life under Israel occupation is like. Free Palestine! 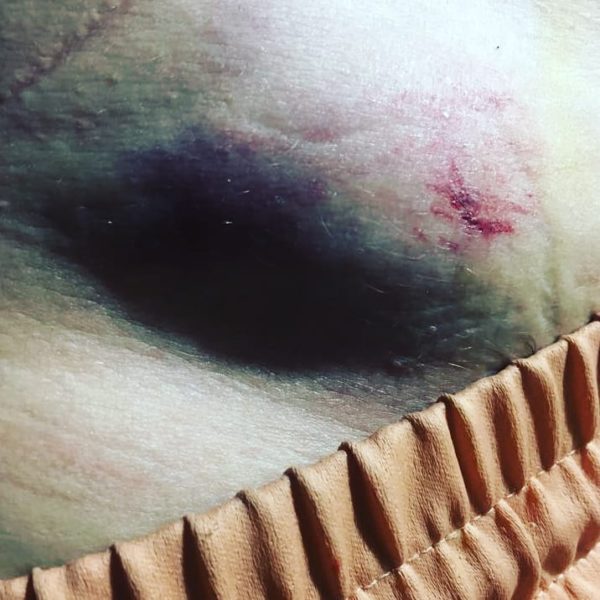 Right after the shooting

Bruises and a wound where the bullet pierced the skin