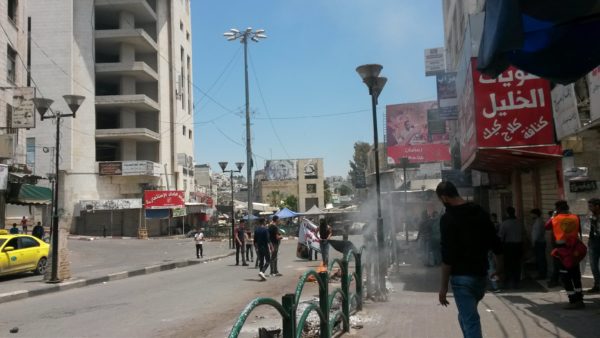 On the morning of Tuesday 15th May, protesters in Al-Khalil/Hebron proceeded on two streets in the Bab-Azawiya area towards Checkpoint 56, where Israeli soldiers were occupying a rooftop inside the H1 (Palestinian controlled) area of the city. The protesters were driving cars with Palestinian flags, waving ‘Great Return March’ flags and some were throwing stones towards the soldiers on the rooftop in solidarity with those killed by Israeli soldiers in Gaza the previous day. Protests were also in support of the right of return, and for the 70th year commemoration of the nakba, or catastrophe, when 700,000 Palestinians were made refugees by Zionist militias in 1948. 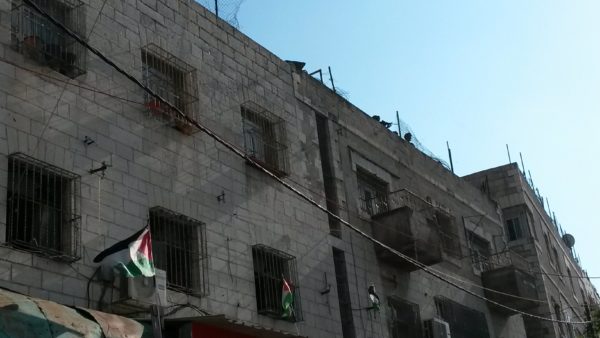 From their position high on the rooftop in Bab Azawiya, Israeli soldiers fire live ammunition and rubber-coated steel bullets towards protesters below.

From their position on the rooftop, Israeli soldiers fired live ammunition towards protesters, shooting and injuring two boys who were taken to hospital. As protesters retreated and ambulance crews were attending to the injuries, soldiers threw tear gas and stun grenades towards the crowd of protesters, medics and journalists. At this point ISM activists heard that a Palestinian journalist had been arrested by Israeli forces for covering the protest but this remains unconfirmed. Protesters burned tires and rubbish bins to provide cover, making it more difficult for the soldiers to shoot them. Throughout the afternoon, Israeli soldiers remained on the rooftop, firing copious amounts of tear gas and stun grenades towards the protesters, most of whom were under 18. One of the stun grenades thrown hit a passing car which was not involved in the protest. As a man who lives locally was filming the protest, soldiers threw a stun grenade directly at him and it exploded at his feet. He was unhurt and laughed it off. Many were badly affected by tear gas inhalation. 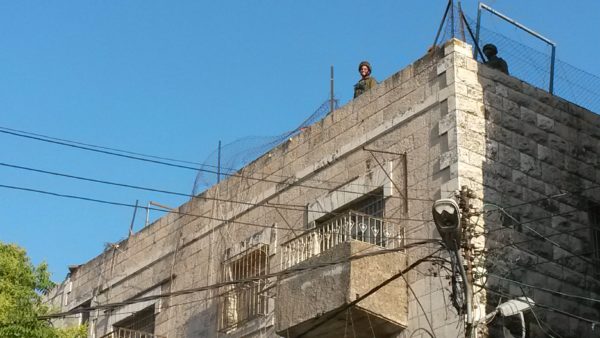 Israeli soldier laughs at protesters after 3 unarmed Palestinians have been shot with live ammunition and rubber-coated steel bullets.

ISM activists observed soldiers on the rooftop clapping, singing, and taunting the protesters with hand gestures and insults throughout the afternoon, between firing rubber-coated steel bullets, stun grenades and tear gas into Bab-Azawiya. One more protester was hit with a rubber-coated steel bullet and taken to hospital, bringing the total injured to three. Later in the afternoon, six heavily armed soldiers left Checkpoint 56, entering into Bab-Azawiya on foot, and then returned inside. After this, soldiers on the rooftop continued to fire many tear gas bombs and stun grenades into the street. A mother with three very scared small girls walked directly underneath the soldiers to pass through Checkpoint 56 as they were firing tear gas into the street below. 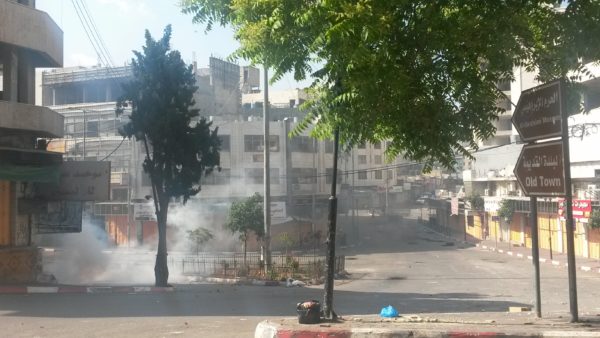 At around 1800, Israeli soldiers occupied a rooftop in Tel Rumeida, and fired live ammunition into the city as it was getting dark. At least eleven live bullets were shot into the densely populated Bab-Azawiya area from high up on the hill in Tel Rumeida, along with between 5-10 stun grenades at around 1930. At no point during the day did protesters use any weapons against the Israeli soldiers, or threaten their safety in any way, except throwing stones.

The soldiers were taking pictures of protesters and international observers with a long-lens camera throughout the afternoon. 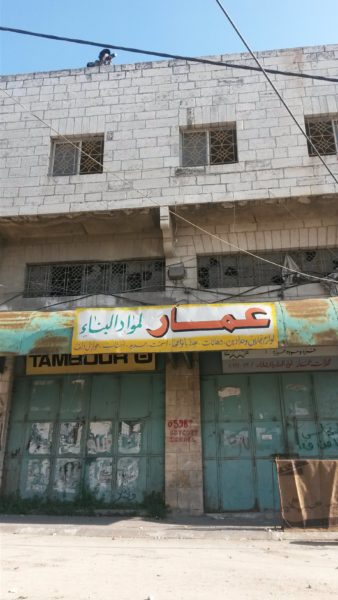 Israeli soldier takes pictures of protesters throughout the afternoon from rooftop in Bab Azawiya as other soldiers shoot live ammunition, rubber coated steel bullets and tear gas at protesters . Graffiti on wall below reads: Boycott Israel.