This Friday afternoon Palestinians gathered in the olive groves in the West
Bank town of Nil’in before marching to the apartheid wall to confront the
Israeli occupation.

At dawn on the 23rd of May 2004 a Palestinian farmer walked towards his
fields in Nil’in but was met with the sight of Israeli bulldozers uprooting
and clearing away olive trees. It is worth noting, that olive trees are an
important part of a Palestinian farmer’s income. The population of Nil’in
immediately started mobilizing in resistance against Israeli plans to seize
and destroy the land resulting in 2500 dunums being returned back.
Palestinian residents of Nil’in have been protesting non violently every
Friday since Israeli forces began the construction of the illegal apartheid
wall in 2008. The wall was built directly through the agricultural land of
Nil’in, preventing Palestinian farmers from access. The apartheid wall has
helped to facilitate the theft of 4000 dunum’s of Palestinian land, where
the illegal settlement of Hashmona’im now stands. 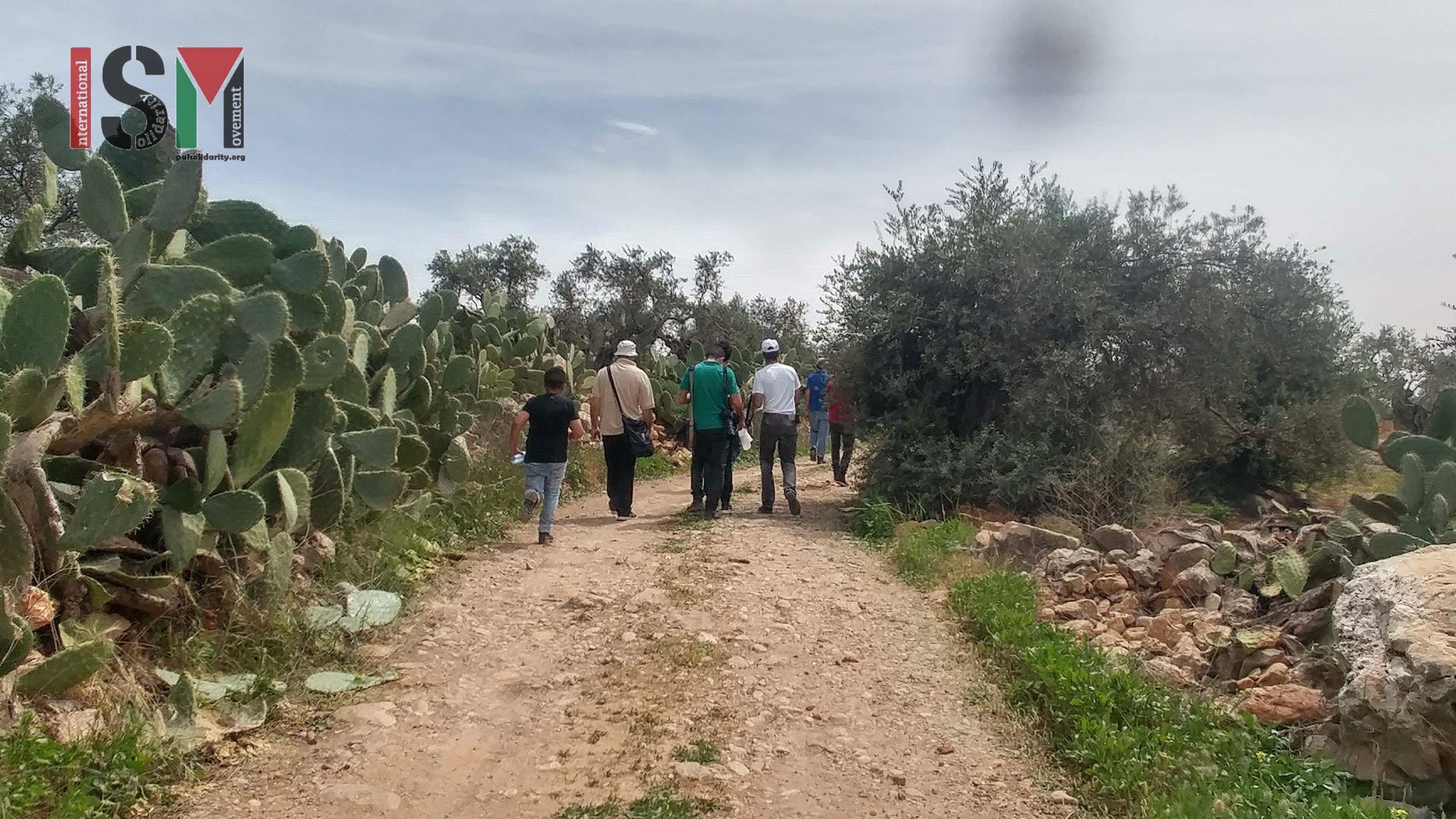 Today after Palestinians had finished Friday prayers they marched towards
the apartheid wall. Israeli activists and International activists were also
present for the demonstration – it was an extremely hot day. Palestinian
youth proceeded to light a fire beside the apartheid wall before throwing
stones. 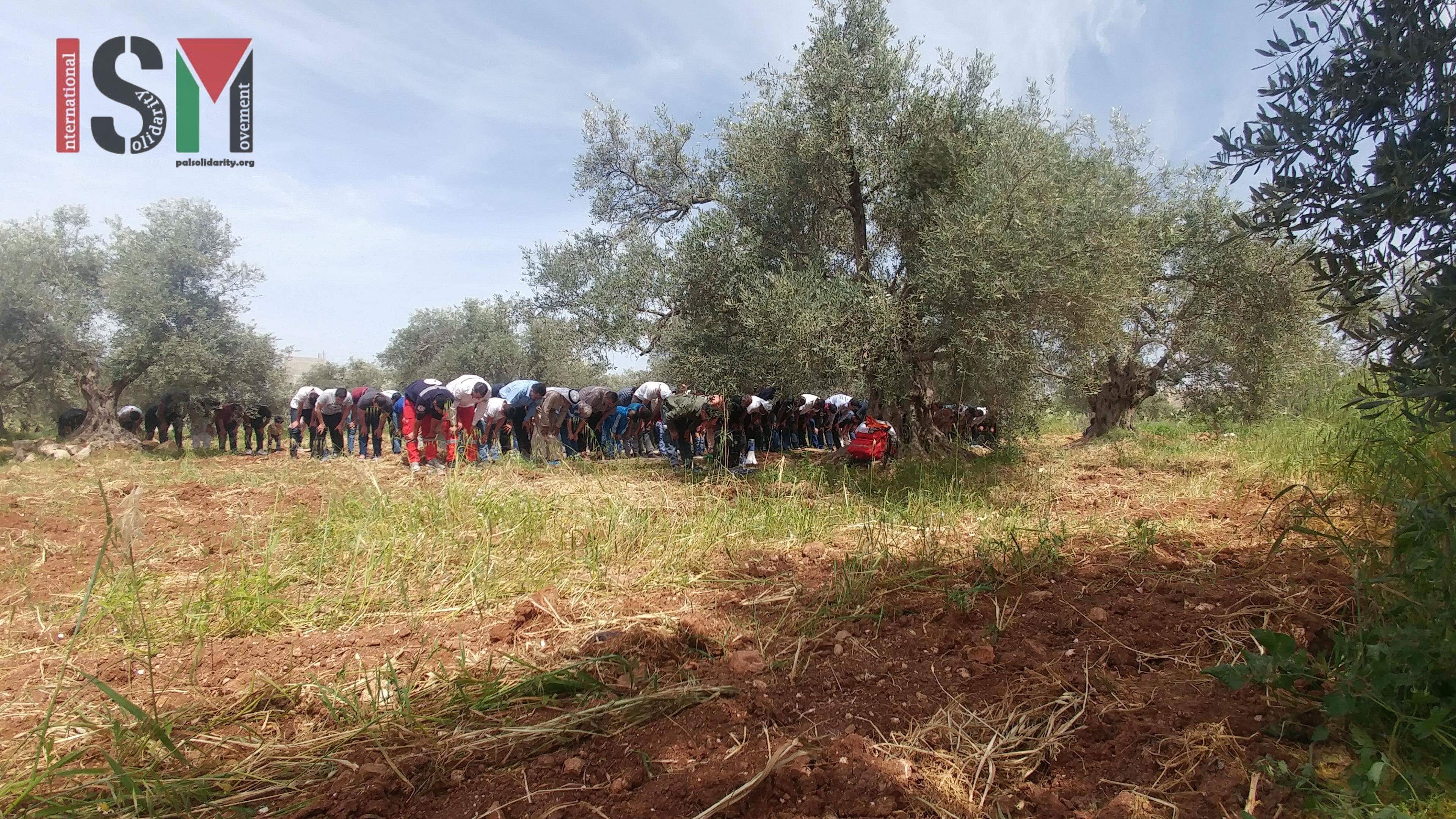 Friday prayers before the protest

An Israeli activist was shouting through a megaphone in Hebrew addressing
the Israeli forces in an attempt to demoralize them. International
Solidarity Activists asked what the Israeli activist was saying in Hebrew
and he told us that every time there is a new brigade of soldiers the
commander tells them why they are here, to protect the settlers and
‘defend’ Israel from the terrorists, meaning Palestinians. The Israeli
activist said that he was telling them that they are not protecting Israel
being stationed here inside the West Bank beyond the 1949 green armistice
agreement line. He also said that oppressing and using collective
punishment on Palestinians is a violation of Judaism and that settlers
living in the illegal settlement, were also violating Judaism living on
stolen Palestinian land. 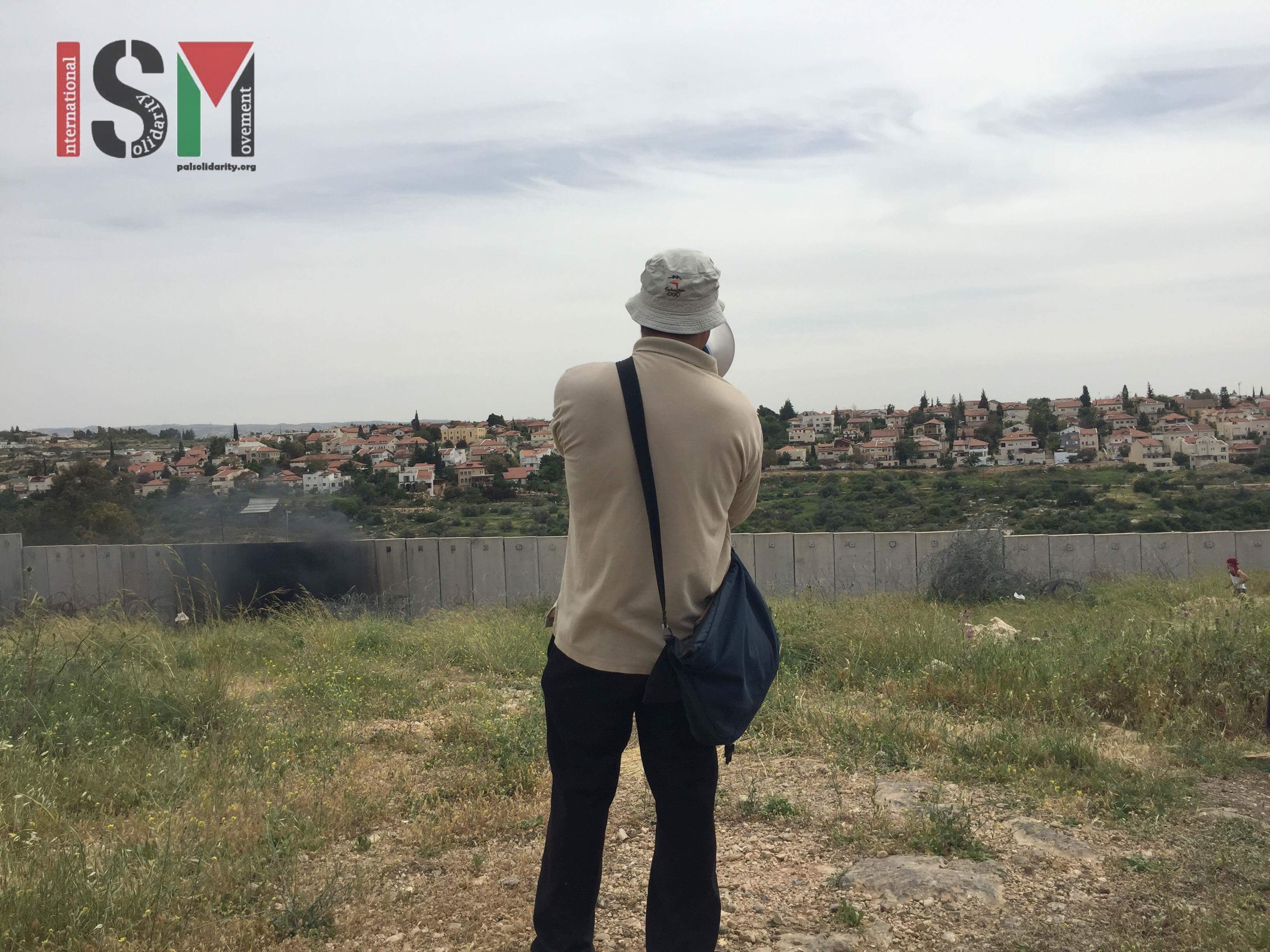 Although the soldiers came in their jeep behind the wall they did not come
through the gate to use weapons of violence against the protestors, which
is very unusual. After the protestors made their stand against the
occupation they returned back to the town. However Israeli forces have been
known to systematically target non violent protestors in Nil’in with the
use of tear gas, stun grenades, live ammunition, and collective punishment
against the Palestinian population of Nil’in. 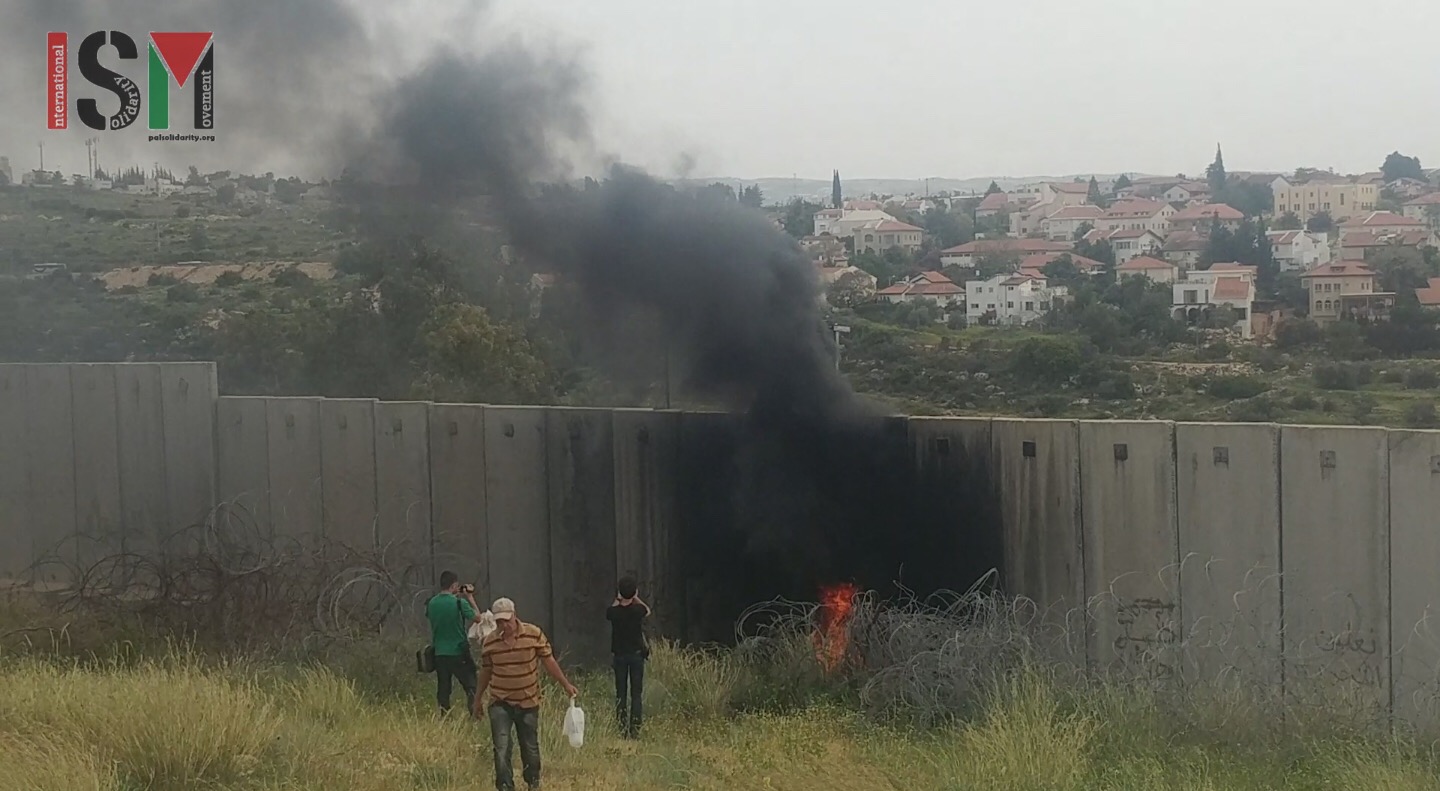 Protestors at the illegal apartheid wall.

International solidarity activists sat down before today’s protest
underneath an olive tree with Hassan Moussa, who is the principal of the
elementary boy’s school in Nil’in.

Hassan Moussa stated that ” During the building of the apartheid wall in
2008 to 2009 Five Palestinians were killed in 12 months by the Israeli
forces. The first Martyr was Hassan Moussa’s nephew Ahmed Mousa, just 10
years old, and was shot in the back of the head with live ammunition”.
“When Palestinians went to bury Ahmed Moussa the next day, Israeli forces
attacked the residents of Nil’in critically injuring a Palestinian man
after firing three rubber coated steel bullets at his head within close
range. After three days of being in a coma the Palestinian later died of
his wounds”. 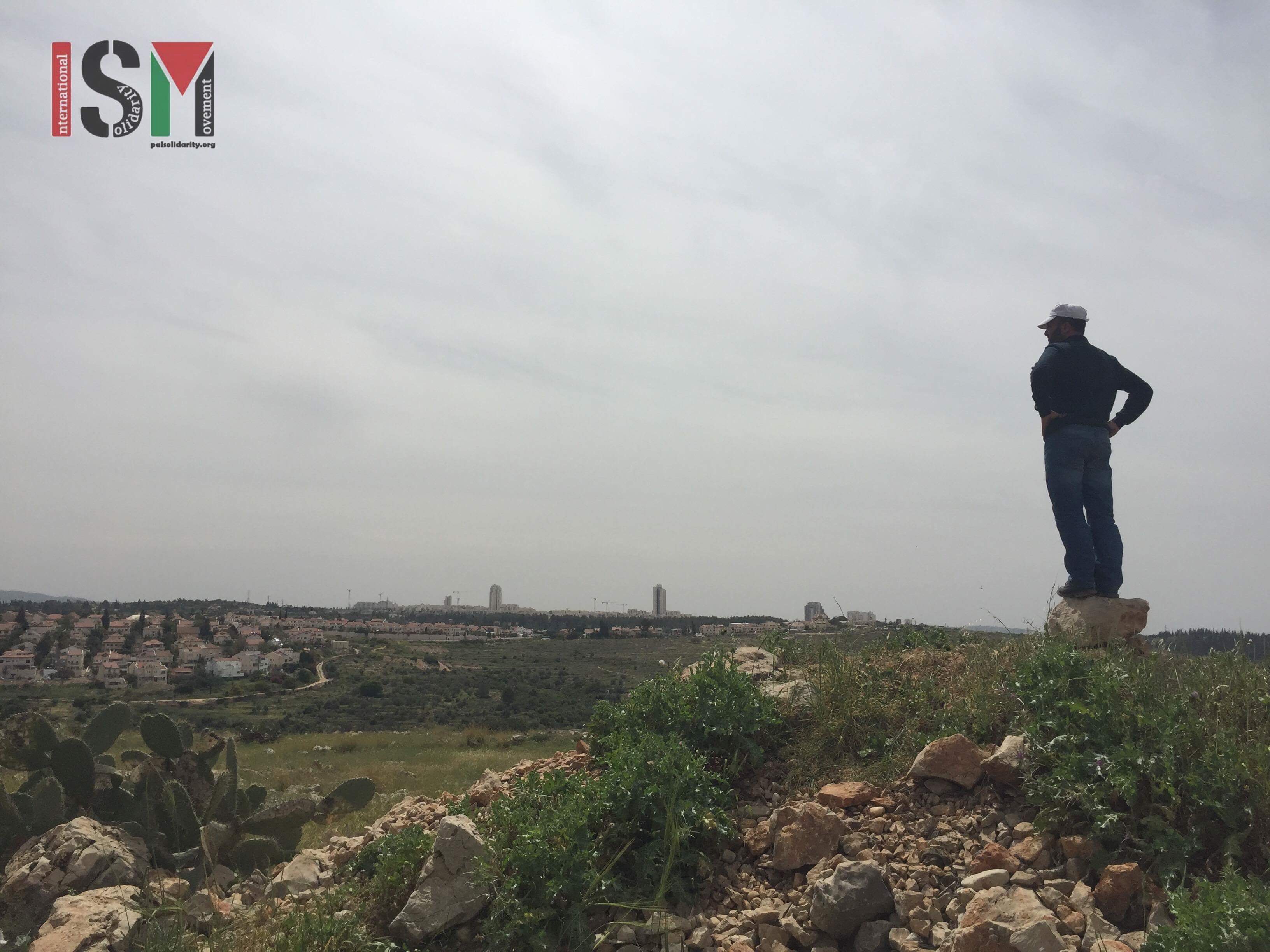 A Palestinian protestor looks over the land belonging to Bi’ilin and the illegal settlement of Hashmona’im.

Hassan Moussa then went on to say that “the only solution we have is to
remain steadfast and to keep raising our voices against this illegal
occupation”. 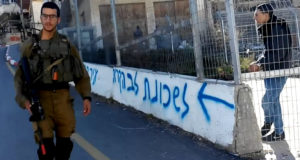 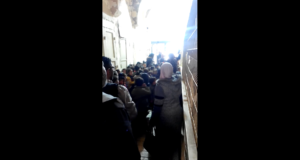