Detained and arrested for no reason, Palestinian told it’s his “last chance”

15th March 2018 | International Solidarity Movement, al Khalil team | Occupied Palestine
Yesterday, Ayman al Fakhori, age 25, was detained for an hour outside the Ibrahimi Mosque checkpoint before being arrested for no reason and escorted down Shuhada Street into a military base. He was shortly after released and escorted by Israeli forces out of checkpoint 56. 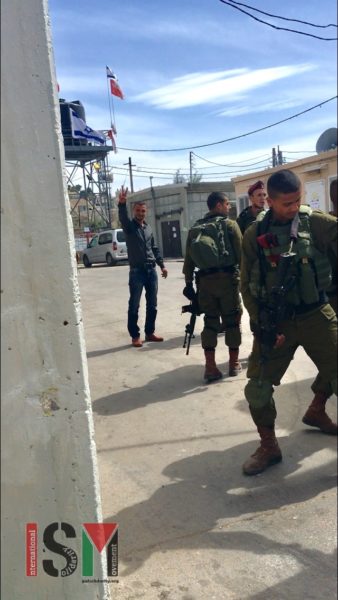 Internationals interviewed him after his release about his time in the military base. He relayed to us that the commander said, “This is the last chance you’ll get,” and threatened his life if he gets arrested again. Fakhori, however, doesn’t know what caused his arrest in the first place.
The only logical explanation, according to Fakhori, is that he is active in informing the public about the Israeli occupation via giving tours throughout al Khalil / Hebron to pro-Palestinian NGO’s and individuals.
The normalcy of his case showed as Fakhori nonchalantly explained the events of the day, affirming that he will not leave his home to make room for the settlers as the soldiers recommended he do. He was happy, though, to see Shuhada Street for the first time; as it is now an apartheid road closed to all Palestinians for the majority of 24 years.
Arrests Ethnic Cleansing Hebron Prisoner 2018-03-16
ISM Media