Today a demonstration was organized by Human Rights Defenders and Hebron Defense Committee under the umbrella name Dismantle the Ghetto. Around 300 Palestinians prayed inside and outside the mosque and shortly after prayers they marched from the mosque to Bab Al Baladia which was once a Palestinian gold market before the settlers and occupation forces shut it down and forced Palestinians out. Israeli forces immediately came through the gates of the illegal settlement at Bab Al Baladia and proceeded to throw many stun grenades and fired tear gas down the street at those who were demonstrating peacefully for their basic human rights.

Video of the march to Bab Al Baladia:

Palestinian vehicles were stopped at gunpoint by the Israeli army and car keys were taken as drivers were forbidden from continuing down Shalala street. Palestinians on foot were made to stop in the middle of the road at gunpoint lifting the top parts of their clothing, their ID’s were also checked before being allowed to walk past. 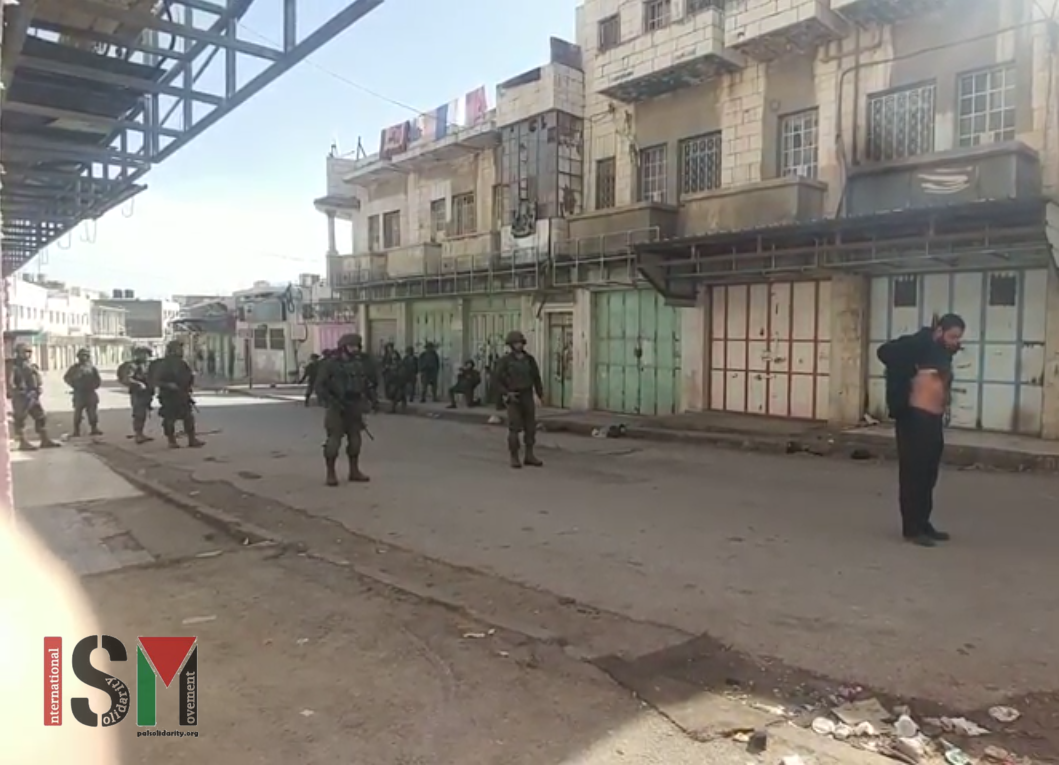 A Palestinian pedestrian made to lift Tshirt by the Israeli army

Clashes then followed immediately after at Bab Azawiyeh. Israeli forces entered H1 area from checkpoint 56 under Palestinian control pointing their guns at Palestinians on foot and at vehicles before firing even more tear gas. Clashes went on between Palestinian youth and armed Israeli forces for around three hours, Israeli snipers were positioned on adjacent rooftops.

Video of clashes in Bab Azawiyeh:

The heart and economic center of Al Khalil/Hebron, Al shuhada street was once a major part of the Palestinian market which was closed in 1994 after a settler called Baruch Goldstein from a nearby illegal settlement opened fire inside the Ibrahimi Mosque killing 29 Palestinians and injuring over 100. Israeli occupation forces imposed draconian rules and apartheid orders on the Palestinian population as collective punishment instead of punishing the settlers. As a result of this, many shops were forced to close and these unjustified orders still exist today. This is why Al Khalil, Hebron is known as the ghost town. Palestinians are forbidden from walking down or driving down their own street and those Palestinians who refuse to leave cannot even open their front doors onto Shuhada street, as the Israeli army welded their doors shut. There are many areas with such severe measures in Hebron which prevent Palestinians from access and freedom of movement. Twenty checkpoints are in the heart of the city which Palestinians have to pass through daily, whilst Israeli settlers face no measures or restrictions whatsoever.

The commemoration of the Ibrahimi massacre falls on the 25th of February every year Al Khalil, Hebron. We expect to see many actions and demonstrations organized against this immoral ongoing occupation, unjust military orders and the expansion of illegal settlements.