In response to Donald Trump’s declaration of Jerusalem as the capital of Israel hundreds of heavily armed Israeli soldiers invaded the Palestinian controlled areas of Hebron to clash with demonstrators.  The clashes were likely also fueled by a general strike of work and schools by Palestinians. 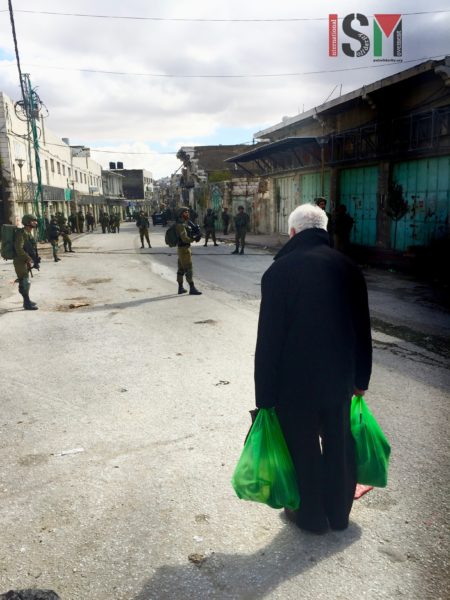 An elderly man waits to go home on a street taken over by soldiers. Such disruptions of Palestinians’ daily lives are common in occupied Hebron.

At roughly 10:30 AM, at least two groups of over 50 soldiers each entered H1 (Palestinian controlled Hebron) with rifles, tear gas cannons, sound bombs, and rubber coated steel bullet magazines.  They entered through Checkpoint 56, from which they went into the city center, home to shops and restaurants, as well as innocent bystanders. 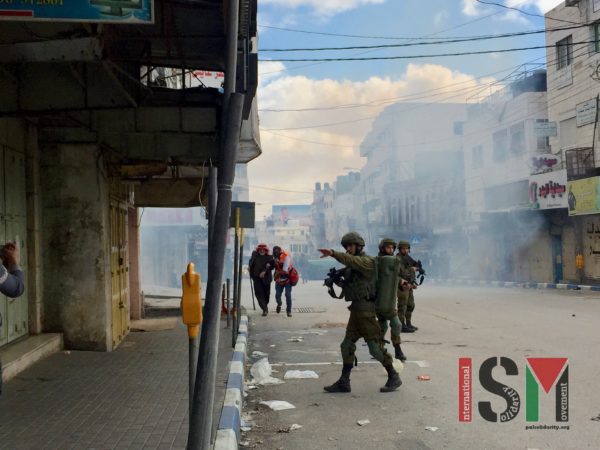 An elderly man, who was hit by tear gas while walking down the street, is helped to safety by a Palestinian Red Crescent Society medic.

Dozens of Palestinians, including small children, the elderly, those documenting the scene on their phones, and hospital patients at the Alia Hospital – at which soldiers fired multiple rounds of tear gas – were injured by tear gas and sound bombs.  The soldiers also fired live ammunition aimlessly at buildings with no regard for civilian safety, a war crime and form of collective punishment.  One boy, age 15, was shot with live ammunition when soldiers fired numerous rounds down a populated street.  They then surrounded him, confiscated videos of the incident, and arrested him. 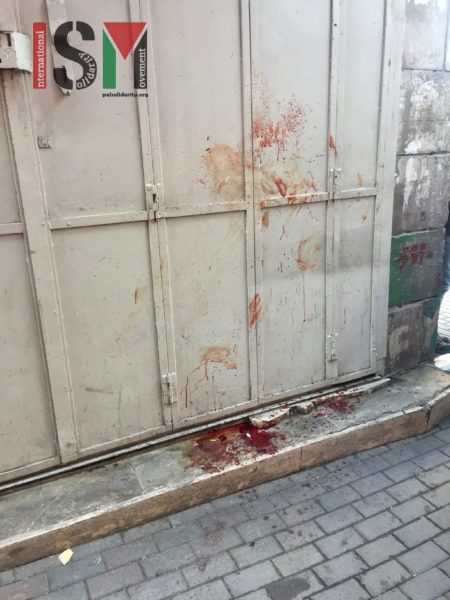 The blood of a 15 year old Palestinian boy shot by Israeli soldiers.

As of 3:00 PM, at least 7 young boys were blindfolded, handcuffed, and brought back into Checkpoint 56.  At one point, soldiers held and terrorized an eight-year-old boy in a secluded, trash-filled corner of an alleyway, and proceeded to use him as a human shield while they walked up and down the street.

Protests are likely to continue throughout the West Bank and Gaza for at least the next few days, and possibly even longer, after Donald Trump formalized the United States’ position on Jerusalem as one in contravention of international law and the opinion of the international community.  The international community has expressly stated – through UN Resolution 181 and others – that it doesn’t recognize any claim to sovereignty over Jerusalem by Israel, which is why most states maintain their embassies to Israel in Tel Aviv rather than Jerusalem.