Major clashes in Hebron as thousands take to the streets [VIDEO]

Thousands of Palestinians took to the streets of al-Khalil this Friday to protest Israel’s tightening of access restrictions to Jerusalem’s al-Aqsa mosque. The protest was suppressed violently by scores of Israeli soldiers and police, who fired live ammunition indiscriminately into crowds of young men and boys. 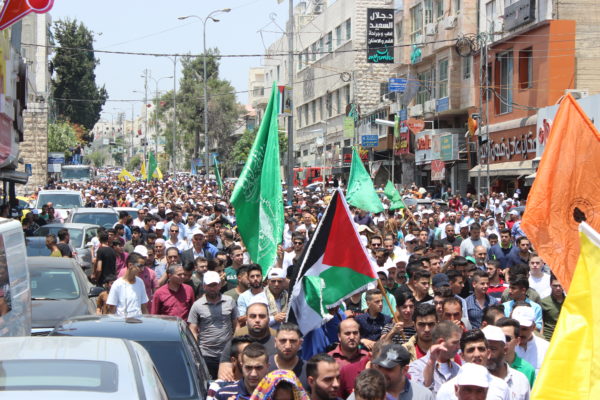 Thousands march in Hebron against access restrictions at al-Aqsa mosque

At least 10 Palestinians were wounded with live ammunition, including one young man shot in the stomach, and another near the heart. Many more were wounded by rubber-coated steel bullets and tear gas, with hospitals and ambulances struggling to hope. The situation was made worse by Israeli forces storming the nearby hospital once, and twice occupying its entrances. 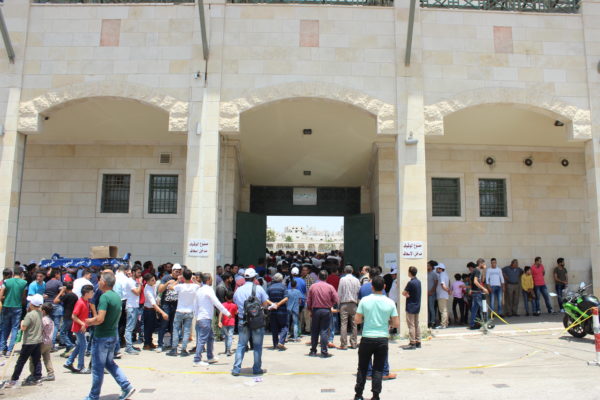 The demonstration followed the closure of Hebron’s mosques in solidarity with those unable to worship at al-Aqsa. Instead, worshippers prayed at Hussein Bin Ali stadium before marching down Ain Sarah street towards Bab al-Zawiye. 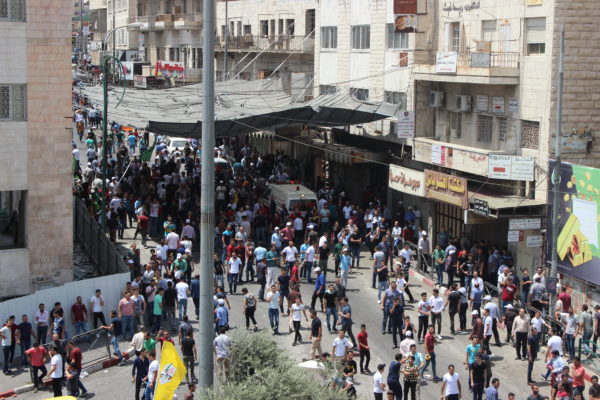 Demonstrators assemble in Bab al-Zawiya, before being dispersed by tear gas and sound grenades

Once the march reached the market, some children began throwing stones and fireworks at the gate of Checkpoint 56, which separates Palestinians from Shuhada street. 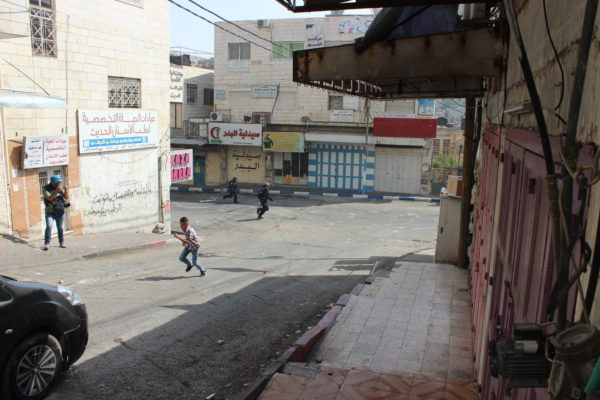 Soldiers responded by storming out of the checkpoint, firing tear gas and throwing sound grenades. Hundreds of demonstrators retreated back up Ain Sarah street as soldiers regrouped in the square with various armoured vehicles. The soldiers then pushed up towards al-Manarah roundabout, meeting a crowd of young men and boys. Soldiers responded to stones with live ammunition, immediately hitting a 20-year old man in the leg. 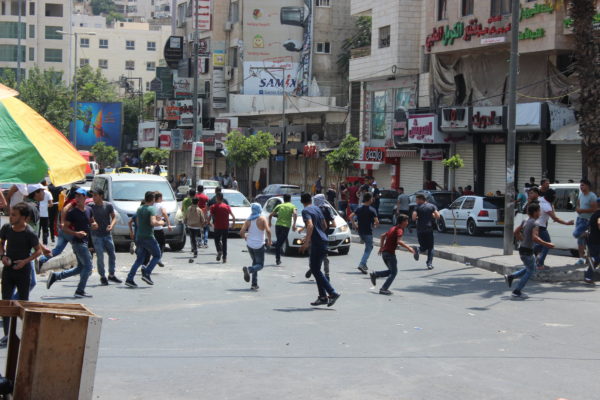 Meanwhile, a similar confrontation was occurring on the neighbouring Ain Sarah street, with snipers shooting a 20-year old man in the foot and a 17-year old boy in the leg. 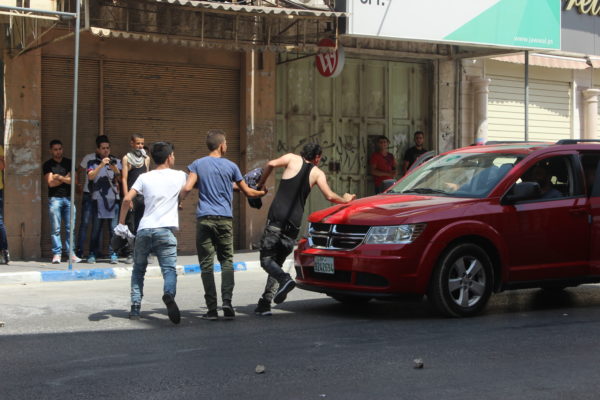 Soldiers and police continued to fire tear gas and .22 calibre ammunition at the crowd, until a volley of stones forced them to retreat towards Bab al-Zawiye. 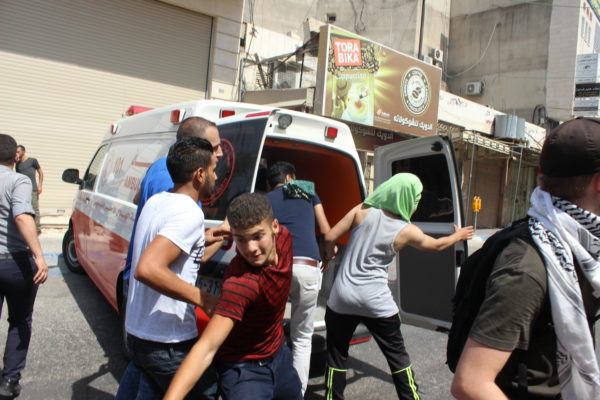 A second offensive, however, saw Israeli forces push back towards Alia mosque. Palestinian youths continued to throw stones at the heavily-armed soldiers and police, who then sent out a water cannon to spray the boys with chemically-treated, foul-smelling ‘skunk’ water. 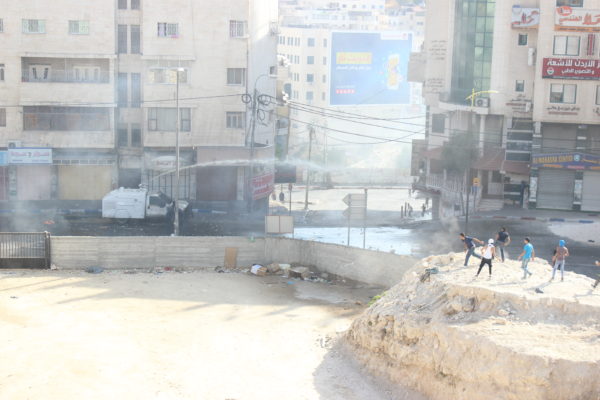 Soldiers pursued the water cannon, and chased protesters into Queen Alia hospital, surrounding it for more than half an hour. 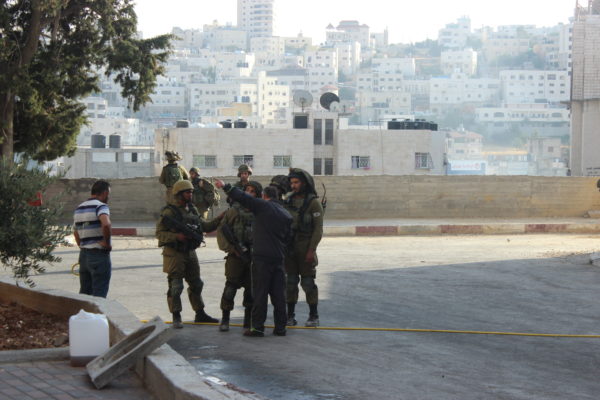 In the mean time, around 60 soldiers and border police pushed forward and assembled with several vehicles at the intersection, while roughly 20 more occupied the roofs of nearby residential buildings. 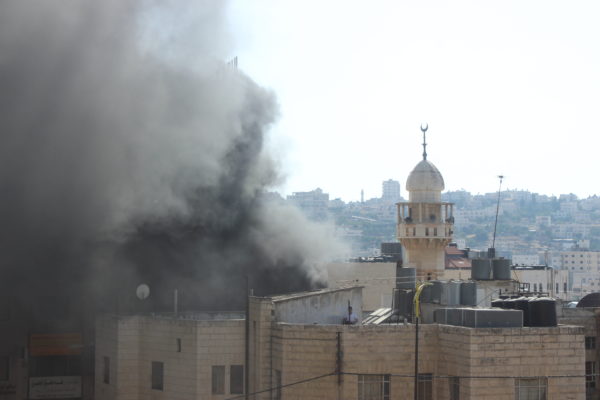 Smoke billows above Ain Sarah street from a tyre-fire below

Three teenage boys who had been watching the protest from their roof were blindfolded, handcuffed and detained by soldiers that stormed their building. 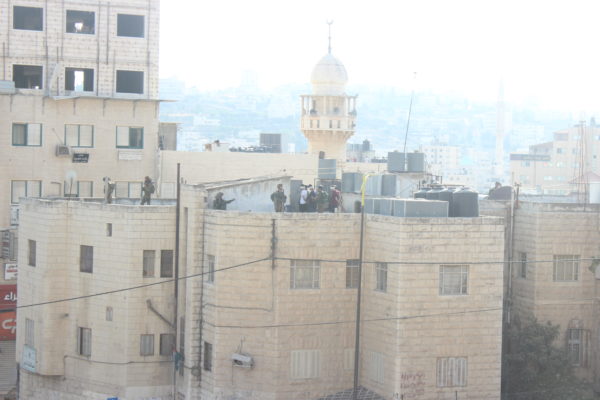 A group of young Palestinians continued throwing stones at the Israeli forces, as well as rolling flaming tyres down the hill towards them. As soldiers began to push up the hill, Palestinians watching from the hospital parking lot barricaded themselves in, but without success. Doctors asked the soldiers, who were now occupying hospital grounds for a third time in one afternoon, to leave. 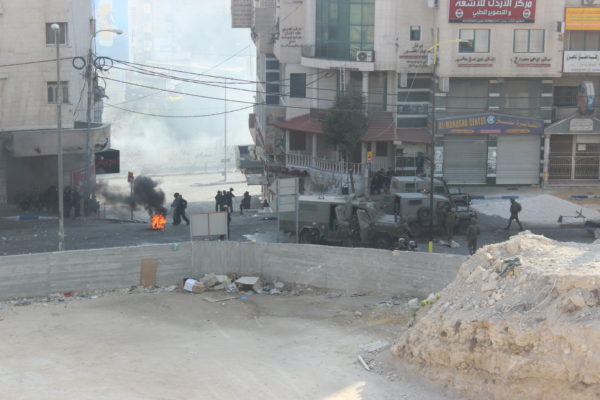 Israeli forces assemble at the bottom of a hill

Eventually the soldiers retreated back down the hill, regrouping with the border police and other soldiers. Despite Palestinian teenagers continuing to throw stones and tyres down the hill, Israeli forces began to head back to their bases. Local youths followed them as they made their way back to Bab al-Zawiye and Checkpoint 56. 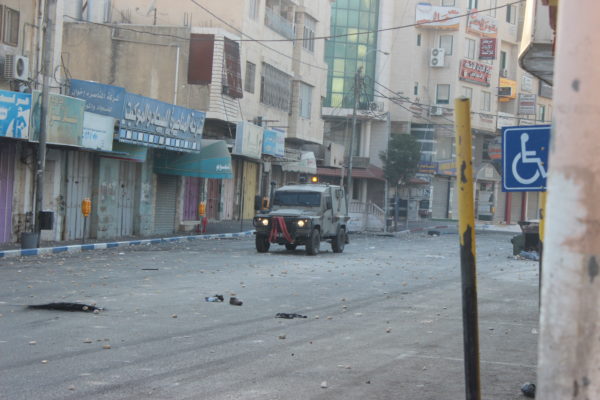