At a time of regular settler violence in the West Bank, the International Solidarity Movement (ISM) is issuing an urgent call for volunteers to join us for the 2017 Olive Harvest Campaign at the invitation of Palestinian communities.

Despite efforts by Israeli settlers and soldiers to prevent them from accessing their land, Palestinian communities have remained steadfast in refusing to give up their olive harvest. 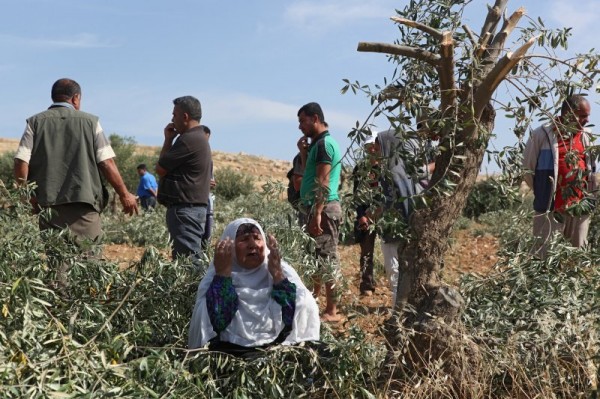 Palestinian woman protests the destruction of the olive trees

ISM volunteers join Palestinian farming communities each year to harvest olives, in areas where Palestinians face settler and military violence when working their land. Your presence can make a big difference, with Palestinian communities stating that the presence of international volunteers reduces the risk of extreme violence from Israeli settlers and the Israeli army.

We support Palestinians’ assertion of their right to earn their livelihoods and be present on their lands. International solidarity activists engage in non-violent intervention and documentation, practical support which enables many families to pick their olives.

The harvest will begin in start-October and run until  mid-November.  We request a minimum 2 week commitment from volunteers but stress that long-termers are needed as well.  We kindly ask volunteers to start arriving in the first week of October, so we are prepared when the harvest begins. 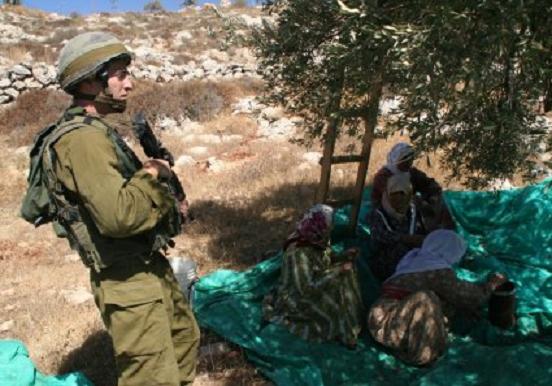 Israeli soldier stands next to Palestinian farmers harvesting their olives

In addition to the olive harvest, there will be opportunities to participate in grass-roots, non-violent resistance in Palestine.

ISM maintains a constant presence in Hebron, where settler harassment and violence is a regular occurrence. Lately, Israeli army violence has escalated for Palestinians living close to the illegal inner-city settlement. Israeli forces have used the Palestinian neighborhoods for military training, and heavily repress any form of resistance, responding with collective punishment as they lob dozens of teargas canisters and stun grenades onto Khalil’s population and even schoolchildren. As harassment, humiliation and violence became a daily occurrence, ISM is present to document these extremely violent responses, and to serve as a protective presence.

In addition to these activities, we participate in the weekly demonstrations in Kafr Qaddum, Nabi Saleh, Ni’lin and others where our presence is requested and protesters face excessive force by the Israeli Occupation Forces (IOF).