Today marks the 6th anniversary of the death of Vittorio Arrigoni, a journalist and an italian activist working with the International Solidarity Movement, in Gaza.

Arrigoni first went to Gaza in 2008, on an activist-organised flotilla seeking to defy the Israeli blockade over Gaza, imposed two years before. On April 16th 2011, when Arrigoni was 36 years old, his body was found in Gaza city, only a few hours after “The Brigade of the Gallant Companion of the Prophet Mohammad bin Muslima”, a Salafist group operating in Gaza, released the video where he was blindfolded and wounded. After investigations, his alleged murderers were arrested and sentenced to life-imprisonment (15 years after appeal). 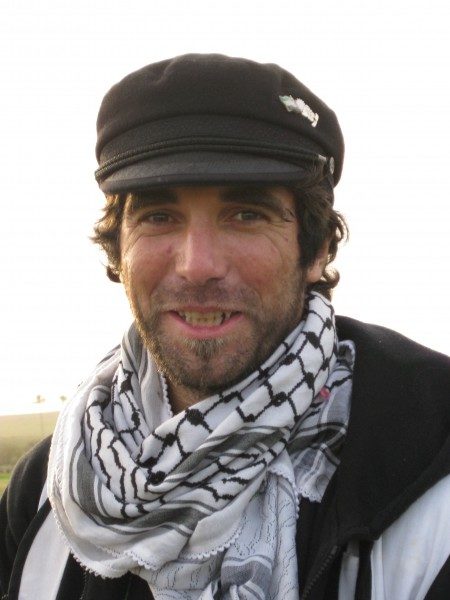 Vittorio Arrigoni was one of the international activists present in Gaza during Israel’s attacks on the Gaza strip in 2008-09, while volunteering with the Palestine Red Crescent Society, and was one of the few international voices dispatching information during the attacks, especially after Israel banned the entry of journalists into the territory.

For almost his 3 years living in the Gaza Strip, Arrigoni was a committed ISM activist, working in solidarity with farmers and fishermen, whose lives were being severely constrained by the blockade. His presence in protests and demonstrations allowed him to document and report the impact of the blockade, warfare and human rights violations in that territory. Arrigoni’s involvement with the Palestinian struggle made him a target for arrest and injuries by the Israeli military several times, and also led him to volunteer in Nahr al-Bared refugee camp in Lebanon.

As it has been happening every year, Palestinians have commemorated the sixth anniversary of Vittorio Arrigoni’s death yesterday, by gathering in the port of Gaza. Vittorio’s memory is also honored in Gaza by the street and school that carry his name. Some of his thoughts on his experience in Gaza and on the solidarity with the Palestinian people have also been collected and turned into a book, “Gaza: Stay Human” (a nod to the way Vittorio used to sign his emails), first published in 2011.

ISM mourns this loss and hopes to honor Vittorio’s death by supporting and showing solidarity to the Palestinian people in their daily, non-violent resistance to the blockade in Gaza and the occupation.

“We must remain human, even in the most difficult times … Because, despite everything, there must always be humanity within us. We have to bring it to others.”