Olive tree planting in the village of Bruqin 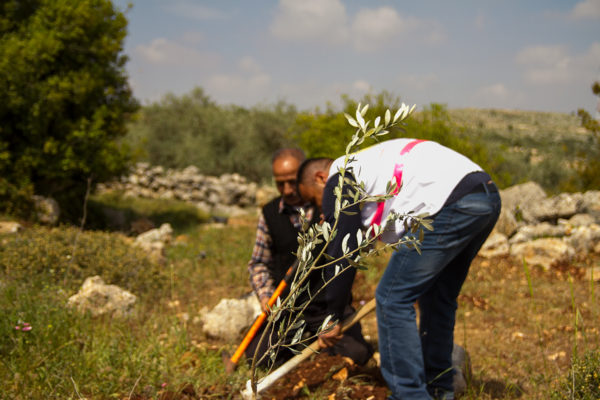 On 8th April 2017 an ISM team joint Abu Skander, a farmer from the village of Bruqin, Salfit district, to plant 30 new olive trees on his field within the village. The village is located close to the illegal Israeli settlement of Bruchin and several others.

Since the beginning of 2017, the Israeli water company Mekorot has started to build new water and sewage pipelines for nearby illegal Israeli settlements, on private Palestinian farmland near Bruqin. Abu Skander found six trees cut down and 14 trees were damaged, after the company first started its work on 30th January. This happened during the building of a temporary street on the field, as first step of the construction activities. Three of his neighbors lost another 20 olive trees and many more were damaged at this time. In total 2.5 dunums of agricultural land has been destroyed so far. 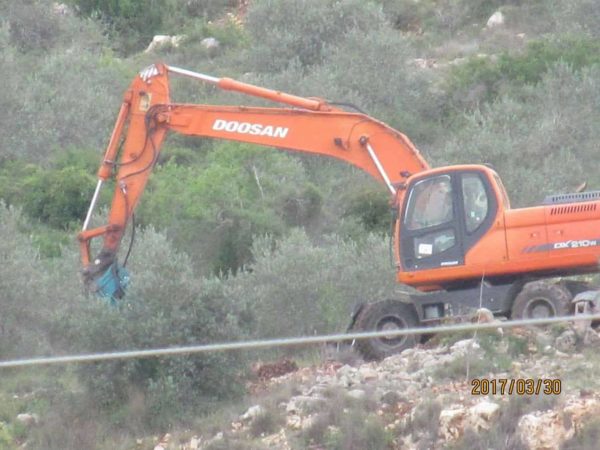 Approximately two weeks ago, the company started to lay the pipes while the farmers were trying to talk to the construction workers and preventing them from destroying their fields, sometimes by standing in front of the bulldozers. The Israeli army was eventually called in. After some arguing, the Israeli forces eventually requested the construction workers to leave the site due to an existing agreement. The agreement states that no trees should be cut down and the land has to be given back after finishing the construction work. Nevertheless, this agreement was reached between the Israeli civilian administration and the water company, without any approval or voice from the farmers.

The construction workers then continued to work on a different part of the field without olive trees. However, after a few days the company returned to work on the other field and as a result, even more trees were cut down and damaged. This time the Israeli army told the farmers that they would come with army vehicles and destroy everything themselves, if they keep resisting. The laying of the pipes is currently ongoing, which makes it impossible for the farmers to return and work on their fields.

The construction of the water infrastructure for the illegal Israeli settlement has not just caused already considerable agricultural losses; it is also a threat to the health of the farmers. One of the farmers suffered an anxiety attack, after he was exposed to the stressful and exhausting situation of seeing his livelihood being destroyed. He was treated in hospital with an intravenous drip and oxygen for several hours; and still has to take medication because of the after effects.

Although the company offered a compensation (either new trees or money), which Abu Skander has rejected, the economic loss is still much higher and he simply demands that they leave his land. It needs years of hard work and resources until the new olive trees bear the same amount of fruits than the already 45yo, which were destroyed. It is not just, that for the construction and expansion of illegal Israeli settlements private Palestinian land often gets confiscated or damaged; despite plentiful water resources, the water supply for the Palestinian residents in the area is highly restricted, whereas, this is not the case for the illegal Israeli settlements.

The town of Bruqin, in the Salfit municipality, is surrounded by a string of illegal Israeli settlements belonging to the ‘Ariel finger’ – a stretch of illegal settlements that carves in deep into the West Bank in an attempt to split the West Bank in two. These settlements have also been exposed as unlawfully dumping untreated waters and sewage onto Palestinian land. The residents of Bruqin are regularly subjected to harassment by settlers and the Israeli army. The farmers are often verbally and physically attacked whilst working on their fields or are even denied access to their own land by the Israeli army.