In Pictures: al-Khalil on lockdown as Israeli settlers and tourists celebrate Pesach 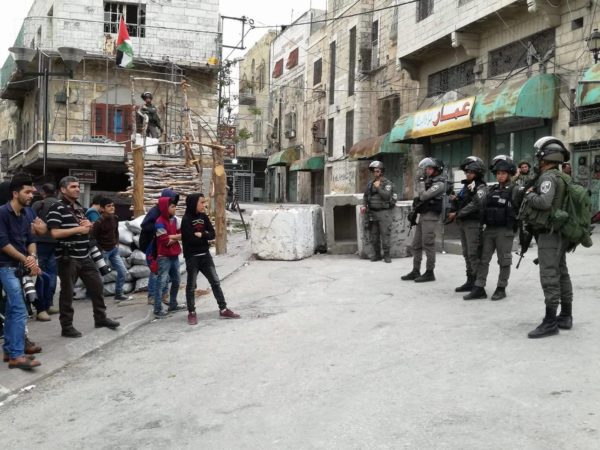 Israeli Border Police occupy the area around the Shuhada Street checkpoint. The concrete barrier was also moved further up the road recenty by Israeli forces, extending their control in H1.

Since the evening of April 10th, 2017, Israeli forces have imposed increased restrictions on the Palestinians of al-Khalil as colonial settlers and Israeli tourists celebrate Pesach – or Passover – across the city. So far, homes have been occupied, checkpoints closed, and Palestinian children attacked with teargas during the week-long holiday. Preparations for the festival began early in the week as an increasing number of Israeli soldiers and military vehicles arrived in Hebron. 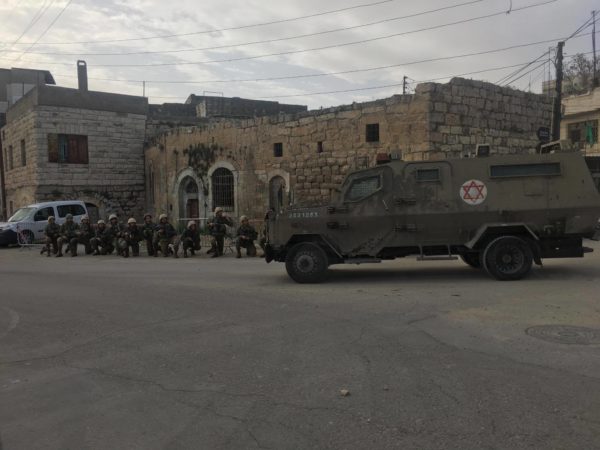 Since the beginning of the week, an increased number of Israeli soldiers and military vehicles have arrived in al-Khalil. 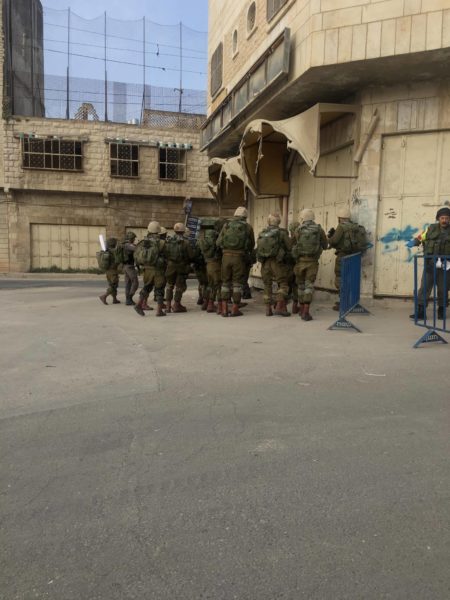 Consequently, Palestinians have faced increased delays and harrassment from soldiers, both the areas of H1, officially under full Palestinian civil and security control, and H2, which is under full Israeli control – the two areas into which al-Khalil has been divided since this Ibrahimi Mosque massacre of 1997 by a Jewish settler. The number of ID checks, bag searches, and body checks have increased across the city’s checkpoints as well as in the Old Town, as a result of Israeli military incursions, both day and night. Israeli forces also entered the homes of Palestinians living on Shuhada Street – for whom the only entry is through the rear of the house – before occupying the roofs of the houses for hours at a time. 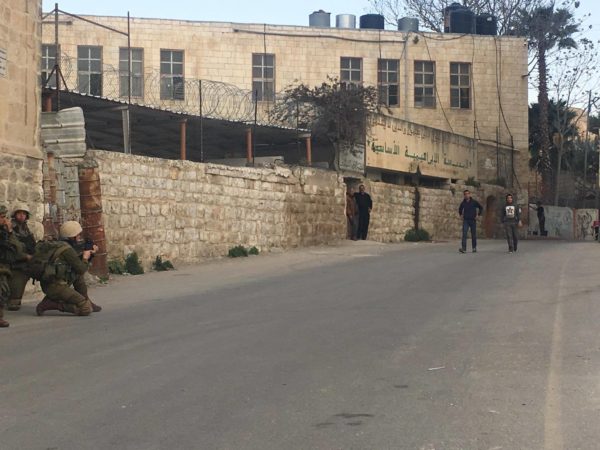 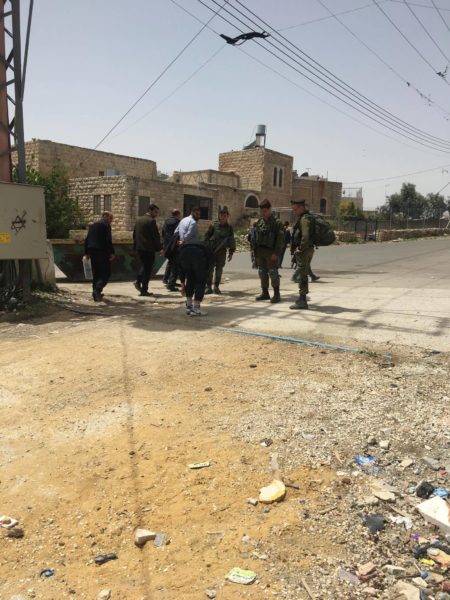 A Palestinian is subject to a body check by Israeli soldiers outside Mutannabi boys’ school, H2. 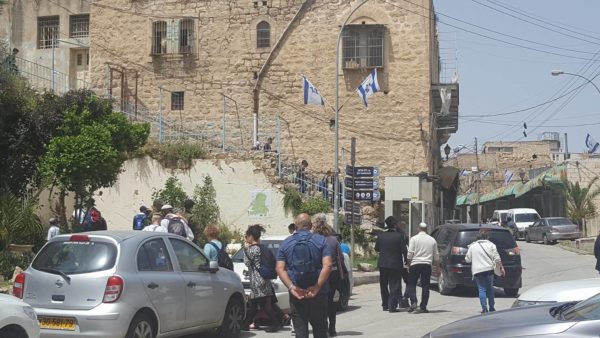 Israelis and colonial settlers celebrate outside the kindergarten on Shuhada street, while Palestinian children are made to pass through a military checkpoint every day on their way to school. 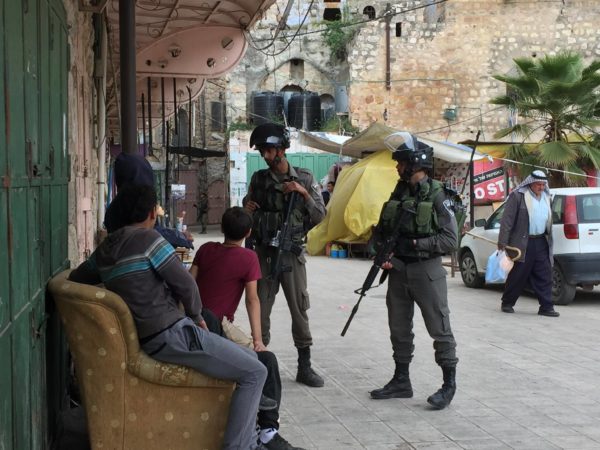 A group of Palestinian boys are questioned by Israeli Border Police in the souk, al-Khalil’s Old Town.

On Wednesday 12th April Israeli forces closed and barricaded the Ibrahimi mosque and the adjoining checkpoints, further restricting Palestinians’ rights to free movement and worship in and around the mosque. ISM activists were also informed by the Christian Peacemaker Team (CPT) that teargas was being fired at Palestinian children by Israeli Forces outside Saleymeh checkpoint. Whilst the checkpoint nearby the Ibrahimi Mosque had reopened for Friday Prayers, Palestinians continue to face long delays and harrassment at the hands of Israeli forces. 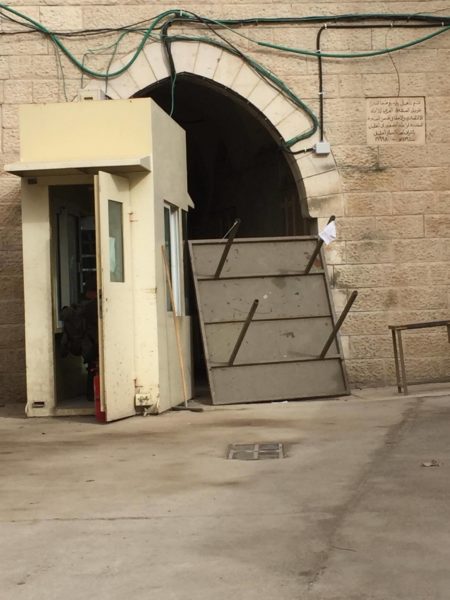 The checkpoint leading to the Ibrahimi Mosque was closed on Wednesday, an barricaded with an upturned table. 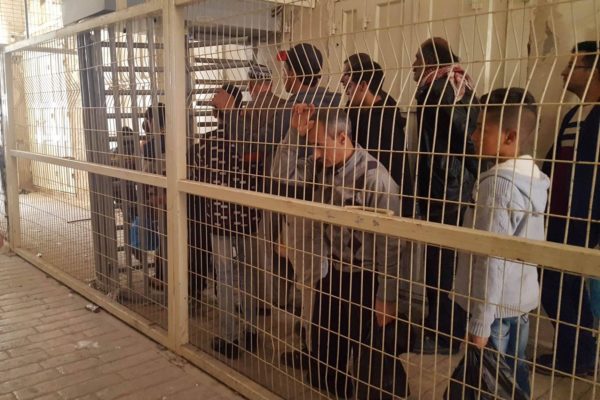 Palestinian residents are made to wait outside the Ibrahimi Mosque checkpoint following its reopening on Friday.

Meanwhile that day, Israeli forces gathered outside Shuhada checkpoint for over five hours, shutting down a whole road in H1 to allow (often heavily armed) Israeli settlers and tourists to pass through the area. Two military vehicles blocked the road, causing significant traffic congestion along Bab es-Sawiyah, while upwards of ten Israeli soldiers and fifteen Border Police filmed internationals and prevented Palestinians from passing through. Shuhada checkpoint leads to Shuhada Street, an area where Palestinian vehicles – including ambulances – are forbidden. Palestinians are only allowed to enter the street if they are numbered and registered as residents of the area. 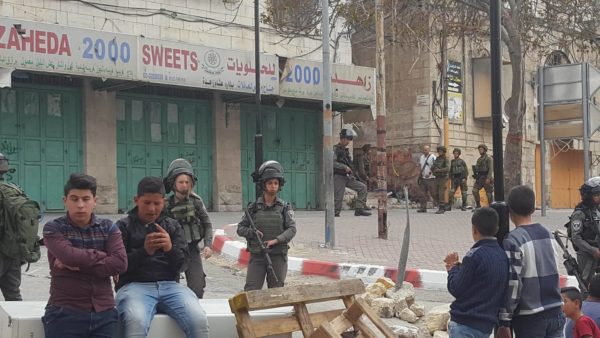 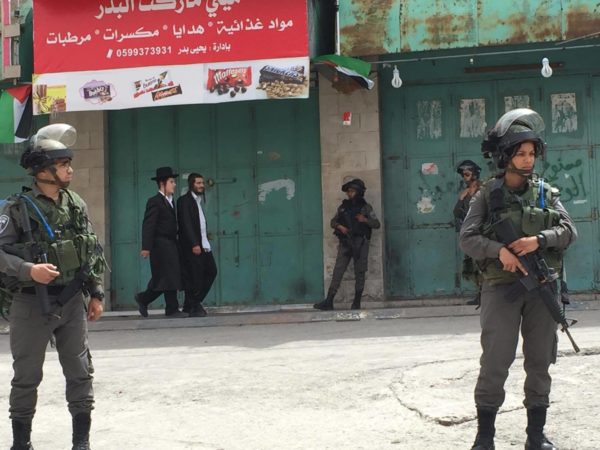 Colonial settlers walk through H1 as part of the Pesach celebrations. 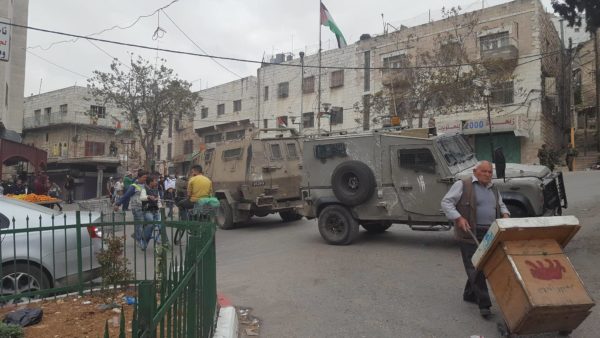 On both Wednesday and Thursday, the Palestinian-owned shops surrounding the Ibrahimi Mosque were ordered to close. Further closures and roadblocks were also imposed by Israeli forces during several incursions by large groups of colonial settlers which passed through the souk in Hebron’s Old Town. Whilst these settler ‘tours’ happen every Saturday in al-Khalil, this week’s incursions follow similar events in occupied Palestine this week, most notably in occupied East Jerusalem where 385 settlers stormed Al-Aqsa. 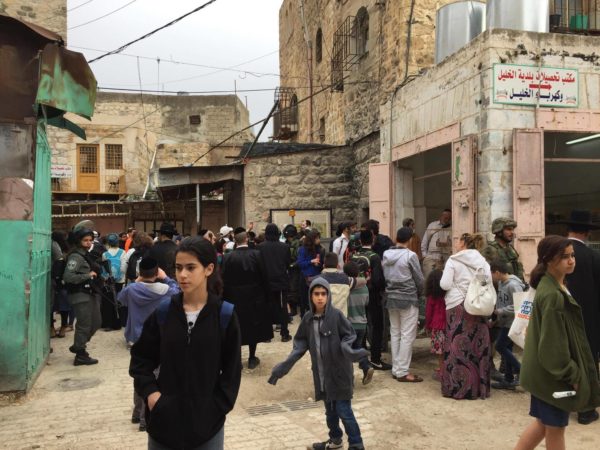 A group of colonial settlers make their way through the Palestinian souk, escorted by heavily armed Israeli forces.

This year, Pesach is celebrated from the evening of Monday, April 10th, until the evening of Tuesday, April 18th. For Israeli settlers, the holiday this year has an additional significance in marking the fiftieth anniversary of the arrival of Rabbi Moshe Levinger and followers of the Greater Israel movement – the first colonial settlers in al-Khalil – to the Park Hotel in 1967, posing as Swiss tourists. Today, around 700 colonial settlers live in the H2 area of al-Khalil and are accompanied by almost 1,500 Israeli soldiers as well as Border Police and Israeli civil police.