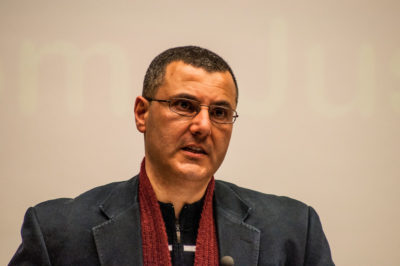 Omar Barghouti is one of the founders of the Boycott, Divestment and Sanctions movement (Photo by The Electronic Intifada)

On March 19th Israeli authorities barged into the house of Omar Barghouti, co-founder of the Boycott, Divestment and Sanctions (BDS) movement; in an attempt to tarnish his image and reputation by claiming an alleged income outside of Israel. Omar and his wife Safa endured a first round of interrogation lasting 16 hours, Omar was subsequently jailed for five days and although he has already been released he is under a gag order.

This last attempt to silence and tarnish the reputation of Omar Barghouti is a desperate move by Israeli authorities that recently considered  the BDS movement as a “strategic threat”. In fact, in 2016, at least one Israeli minister went as far as suggesting “targeted civil eliminations” (meaning murder) of BDS leaders with the help of Israeli intelligence.

Inflammatory fabrications were published against Omar Barghouti just a day before his arrest was made effective, signalling an attempt to silence and tarnish his reputation. Furthermore, the current investigation includes a travel ban which may stop Omar from receiving the Gandhi Peace Award jointly with Ralph Nader, scheduled in a few weeks time in the USA.

The International Solidarity Movement stands in solidarity with Omar Barghouti in the light of this new attempt at silencing the voices of those who stand for freedom, justice and equality against a brutal military occupation; and we ask our friends and comrades to intensify their solidarity work with Palestine, including BDS chapters throughout the world.